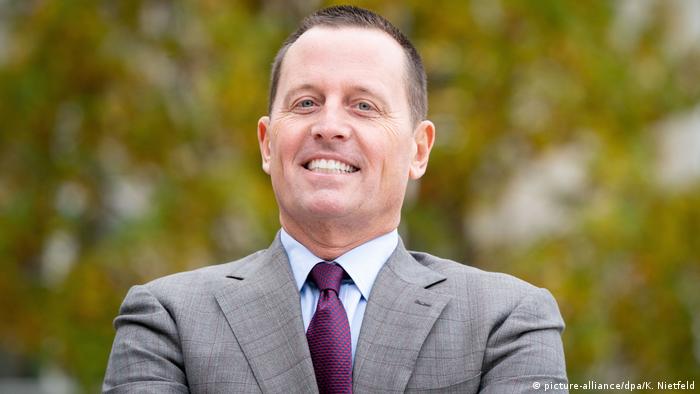 Richard Grenell is said to be stepping down from his post as US ambassador to Germany in the next few weeks, according to media reports.

The rumors come as Grenell completed his temporary leadership as Director of National Intelligence and was set to return to Berlin to resume his ambassadorship full time.

The 53-year-old had said in February that he wished to remain in the role of Washington's top diplomat in Berlin, but rumors began circulating about a possible departure, when right-wing online magazine The Daily Wire said Grenell had spoken about it with President Donald Trump.

According to the German newspaper Rheinische Post, Grenell's spokeswoman ''could not confirm'' the potential departure.

Neither the embassy nor the White House has commented on Grenell's future as ambassador to Germany.

"It is our policy not to comment on travel or schedules, but Ambassador Grenell has continued to actively engage on Administration priorities on Germany while serving as the Acting Director of National Intelligence," an embassy spokesperson told the DPA news agency.

If Grenell departs, he would likely be replaced by Robin Quinville, deputy chief of mission at the embassy.

In February, it was reported that Grenell was set to become acting director of national intelligence, replacing the current incumbent of that role, Joseph Maguire.

Grenell has been in Berlin for a little over two years, but during that time he has not made many friends among the city's political elites. Fiercely loyal to Donald Trump, Grenell has spent his tenure actively advocating the president's foreign policy vision.

Shortly after his appointment as ambassador, Grenell publicly warned German companies not to enter work with Iran, as part of the Trump's new stance with the country, which included exiting the Iran deal.

Grenell was also vocal in criticizing Germany for what he saw as insufficient contributions in military spending and lashed out about Berlin's commitment to the Nord Stream 2 pipeline with Russia.

Despite being criticized by many German politicians, the US ambassador is said to have had a good relationship with German Health Minister Jens Spahn, of Angela Merkel's conservative CDU.