The head of US intelligence and ambassador to Germany, Richard Grenell, has said that Berlin is not honoring its commitments to its allies. Russian and Chinese aggression are not just relics of the past, he said. 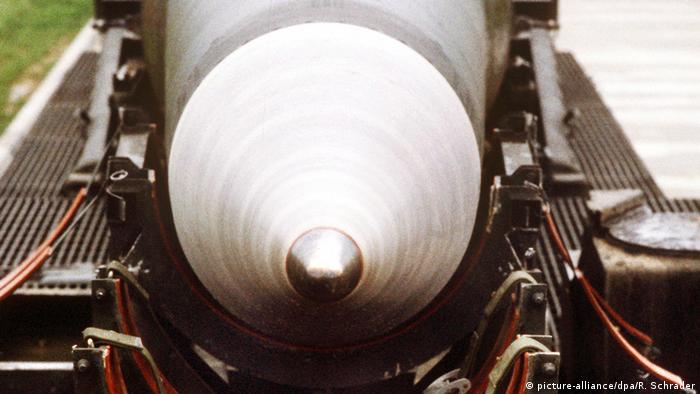 A day after a new report found that the US spent $35.4 billion (€32.6 billion) on operating and developing nuclear weapons last year, President Trump's ambassador to Germany and newly minted spy chief, Richard Grenell, has accused the German government of not doing its part for NATO's policy of nuclear deterrence.

Grenell warned that just because the Cold War is over, it does not mean European security is not threatened.

"The Russian invasion of Ukraine, Russia's deployment of new nuclear missiles on the periphery of Europe, and new capabilities of China, North Korea and other countries make it clear that the threat is all too present," Grenell wrote.

The ambassador said that if German Foreign Minister Heiko Maas, a member of the SPD, wants Germany to be "a power for peace," as he claims, "instead of undermining the solidarity that forms the basis of NATO's nuclear deterrence, it is now time for Germany to meet its commitments to its allies and to continuously invest in NATO's nuclear participation."

"The political leadership in Germany, especially that of the SPD, must make it clear that the government is keeping these promises."

Grenell said that the US, including President Trump, support nuclear disarmament but see the possession of atomic weapons as a necessary deterrent to Russia and North Korea. However, the past year, not only have the US taxpayers had to pay $5.9 billion more than the previous year for the country's nuclear arsenal, the president also walked away from the country's 32-year disarmament treaty with Russia, and vowed to upgrade the US' stockpile of weapons being housed in Germany.

In his op-ed, the ambassador argued that for other NATO members in the east, keeping Russia at bay was a more real threat, and it was the duty of bigger allies like the US and Germany to protect them.

"An honest assessment of the dangers we face is critical to our partnership. Our allies in Poland and the Baltic states know that these threats are not remnants of a Cold War; no ally can ignore this fact."

He then questioned whether Germany would "assume its responsibility or sit back and reap the economic fruits of security that other allies guarantee."

SPD calls for US nukes to be removed

Two weeks ago, Rolf Mützenich, the leader of the SPD in parliament, called for the government to force the US military to remove its nuclear weapons from German territory. The US is allowed to station atomic weapons in Germany as part of a deal in which Washington provides necessary support for Germany's military. Due to Germany's history, defense spending is traditionally politically unpopular.

Mützenich's comment came after Defense Minister Annegret Kramp-Karrenbauer said that she would approve a deal with the US for new fighter jets to replace Germany's outdated aircraft.

Grenell has routinely earned the ire of officials and the public for what is seen as his interference in German politics and stepping outside the proper role of an ambassador. He was recently elevated to being acting Director of National Intelligence, bringing him even closer into Trump's inner circle.

President Vladimir Putin said Russian nuclear forces would be placed in a "special mode" of readiness following "aggressive statements" by NATO powers amid the invasion of Ukraine.