Is South Korea's LGBT+ community being scapegoated for COVID-19 spread?

Health authorities call on members of the LGBT+ community to come forward to be tested and to halt the spread of the novel coronavirus, despite homophobic comments in some quarters of South Korean society. 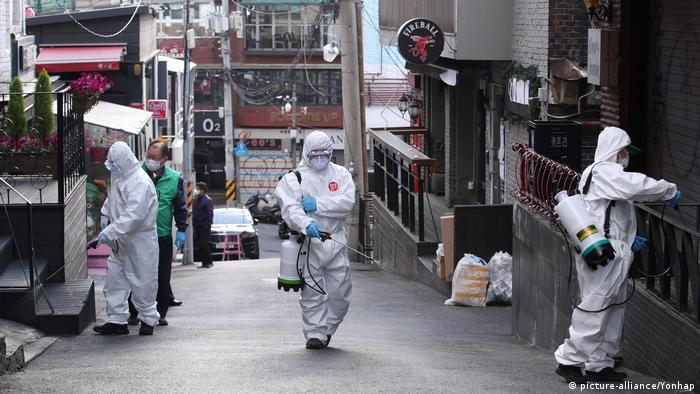 The number of coronavirus cases linked to Seoul's popular Itaewon nightlife district climbed to 119 on Wednesday, with South Korean authorities warning that overt homophobia is hampering their efforts to trace the thousands of people who visited the area over the weekend to celebrate the relaxing of social distancing restrictions.

Imposed in late February — when the virus was at its peak and on one day saw 909 people test positive for the disease — the relaxing of the restrictions on May 5 was greeted by the Korean public, who visited parks, shops, cafes and restaurants to celebrate their rediscovered freedoms.

Many younger people took the opportunity to visit Itaewon, famous for its vibrant nightclubs and one of the few places in still-conservative South Korea where members of the LGBT+ community can let their hair down.

Unaware that he was carrying the virus, a 29-year-old man visited five nightclubs and bars in Itaewon, including HIM and The King Club, both of which are popular with homosexual men. The man, who has not been named, subsequently felt unwell and tests confirmed that he was positive for the coronavirus — and that diagnosis was swiftly followed by dozens more cases linked to the same clubs and bars. Several people traveled to other parts of the country and have further spread the virus.

The emergence of what has been termed the Itaewon cluster was seized on by some conservative media commentators, with the church-operated newspaper Kookmin Ilbo highlighting the fact that the man had visited a gay club. The reports triggered a number of homophobic comments on social media.

That hostility is being blamed for the tepid response to health authorities' calls for anyone who visited the district to come forward and undergo testing. On Sunday, authorities attempted to contact more than 5,500 people who had given a name and contact details on entering clubs, but around 3,100 did not respond or had given false contact details.

"In the case of infections linked to clubs in Itaewon, we are seeing some criticism and hatred towards confirmed patients and a specific group of people," said health ministry spokesman Yoon Tae-ho on Monday.

"The leaking of personal information of people who have been confirmed to have the virus and spreading unsubstantiated rumors can be hurtful to patients and the people around them," he said, adding that such actions can also be in contravention of the law.

Authorities are now trying to trace people through credit card transactions and mobile phone records, while health officials are emphasizing that anyone who wants to take a test can remain anonymous.

"I think there is a degree of scapegoating of the LGBT+ community going on, in much the same way as the Shincheonji cult was strongly criticized after the outbreak in Daegu in early March," said David Tizzard, an assistant professor of education at Seoul Women's University and a columnist for a South Korean newspaper.

"It’s something of a paradox," he told DW. "For some time, the LGBT+ community has been trying to get its voice heard and to be more recognized as a part of South Korean society, but now they suddenly want the opposite and they don’t want to be seen because of the backlash over the Itaewon cases.

"I think people are angry not because they are gay but because it was irresponsible to go to these clubs and if it had been any other group – a band or a football team – then the reaction would probably have been very similar."

Tizzard agrees, however, that sexual minorities have a "hard time" in conservative and still deeply traditional Korean society.

"They exist as a silent minority and very few Koreans are openly out," he said. "It is possible that is because they have so few role models and the only person who is openly gay is famous for being overly flamboyant and playing it up," he said.

"As it is, they are pushed down by society and pulled down by their own concerns that their careers will suffer if they are identified as gay," Tizzard added.

But there are some in the community who apparently see the present crisis as a way of integrating homosexuals into the broader society.

Hong Seok-cheon, a restaurant owner who is Korea's first openly gay celebrity, has called on people to get tested for the virus, saying, "This is the time to muster your courage."

"Sexual minorities fundamentally fear that their identity could be revealed to their families, those around them and the community," he said in a social media statement.

"I am concerned about this incident but I am most concerned that there are many people who are not responding to calls and have not been tested. Your health, that of your family and the community should come before your concern about 'outing,'" he said.

Others have echoed that position, with a coalition of LGBT+ groups announcing Tuesday that they will provide support for anyone who wishes to be tested and to remain anonymous.

In a statement, the seven advocacy groups said, "We, sexual minorities, do not wish COVID-19 to spread further. We plan to communicate with health authorities to set aside any stumbling blocks that are holding back testing."

"Sexual minorities are concerned about exposure to domestic violence and discrimination in the workplace once their identities are disclosed during self-quarantine or after a test result returns positive," said campaigners, which include Chingusai, which represents gay men, and the Solidarity for LGBT+ Human Rights of Korea.

"Members of the LGBT+ community are concerned that they could lose their jobs if they are ‘outed,'" said Tizzard. "There is no anti-discrimination law to protect them and there would also be strong social stigma.

"But, at the same time, this situation could act as the opportunity for them to act, to be public in their efforts and, with the support of the government, then this could arguably be the LGBT+ community’s chance to win wider acceptance in society," he said.