Is Poland′s governing Law and Justice party dismantling democracy? | Europe| News and current affairs from around the continent | DW | 13.04.2016

On this week's "Conflict Zone," Polish Foreign Minister Witold Waszczykowski warns of the Russian military threat to Poland. But he is reluctant to answer questions about the rights of homosexuals and access to abortion.

Polish Foreign Minister Witold Waszczykowski is a member of the conservative Law and Justice Party which came to power last November and which critics say is dismantling democracy at home and isolating Poland abroad.

In an exclusive interview with DW "Conflict Zone" host Michel Friedman, Waszczykowski said he thinks Russia is provoking Poland militarily and is trying to alter the security architecture of Europe.

"Russia is trying to change the situation in Europe or maybe outside of Europe, it's trying to rewrite and rebuild the security architecture. It's trying to be more influential," Waszczykowski said, adding that three years ago Russia rehearsed a nuclear strike against Warsaw in a military exercise. "So we have to be cautious," he said. 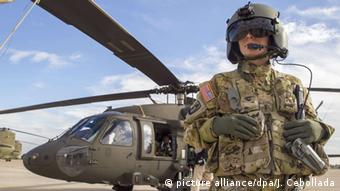 There will be a temporary deployment of NATO troops in Poland

According to the Pentagon, there will be a temporary deployment of US troops to Poland and the Baltic states starting next February, but Waszczykowski called on NATO troops to be permanently deployed in Eastern Europe.

"We just want to have an equal status of security for all NATO allies. The lives of Poles are as precious as the lives of Italians, Greeks or Germans," he said in the interview.

As a NATO member state, Poland already enjoys protection under Article 5 of the North Atlantic Treaty, in which members "agree that an armed attack against one or more of them in Europe or North America shall be considered an attack against them all."

But that's not enough for Waszczykowski, who said he prefers "the deployment of troops to deter any kind of trouble" over the "pledge of support in case of trouble."

Poland's government has come under fire in recent weeks for refusing to take in the 7,000 refugees Warsaw had already agreed to accept in 2015. After the Brussels attacks, Polish Prime Minister Beata Szydlo said she wasn't "okay with accepting any number of migrants at all" and criticized German Chancellor Angela Merkel for having "invited migrants into Europe" in the first place.

Confronted with Poland's reluctance to take in refugees, Waszczykowski said: "We will respect international law, and those who qualify as refugees have a right to apply for asylum in Poland." 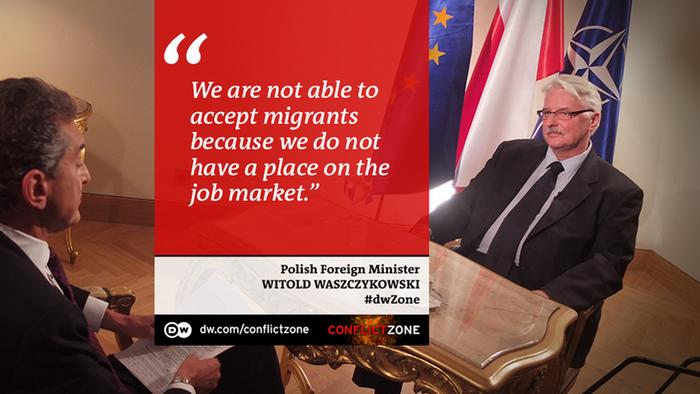 However, Waszczykowski stressed his party's differentiation between refugees and migrants and said Poland will not provide shelter for migrants because "there is no place for migrants on the Polish labor market."

Stirring up fear and racist stereotypes?

Waszczykowski refused to give specific answers regarding a quote made by his party's leader, Jaroslaw Kaczynski, who said that refugees coming to Europe have brought diseases like cholera and dysentery to Europe.

The World Health Organization has come out and refuted Mr. Kaczynski on the issue. Critics have said Kaczynski is fostering hate and fanning the flames of racism with statements like this.

In the "Conflict Zone" interview, Waszczykowski agreed with Kaczynski, saying that sometimes refugees do bring diseases.

Discrimination based on any grounds, such as religion, is prohibited according to the Charter of Fundamental Rights of the EU.

But in a previous interview with The Middle East Eye, Waszczykowski said that "an individual who arrives in Poland must demonstrate that he or she can integrate in our culture and society. Therefore, we can place greater hopes that Christian refugees have more potential to assimilate."

Asked whether that means Poland prefers Christian refugees over Muslim refugees, Waszczykowski didn't give a straight answer, saying this was just the impression Germany has about Poles and that each country had the right to pursue an individual migration policy.

Waszczykowski added that they were not afraid of Muslims as "only a few hundred" Syrians had applied for asylum in Poland so far. "I don't see any inclination of thousands of Muslims to go to Poland. They are not knocking at our doors," he said.

'This is not on the agenda of minister of foreign affairs'

Poland has become a place of fear for homosexuals. Poland's former president and founder of the conservative Law and Justice Party, Lech Kaczynski, attacked what he called "the homosexual culture" and suggested widespread homosexuality would lead to the end of human life as we know it.

But Waszczykowski was reluctant to discuss this issue in the interview with DW. "I don't have to discuss these issues as I'm the minister of foreign affairs and this is not my prerogative," he said. 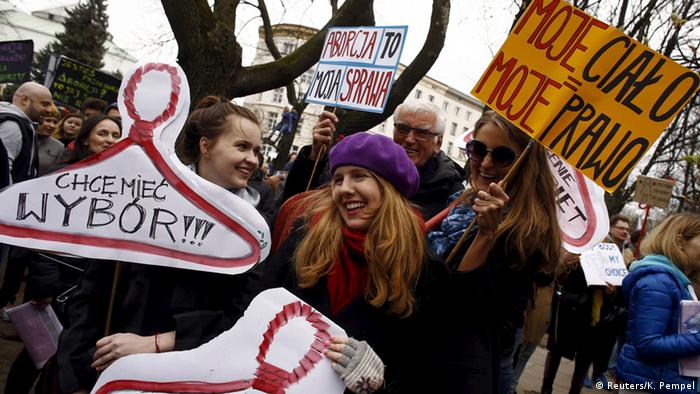 Waszczykowski was also reluctant to touch upon issues of abortion in his country, which has caused an intense debate in Poland in recent months.

Waszczykowski refused to give his opinion on the matter, saying this was a domestic matter outside his remit. He stated that he did not participate in international political discussions about the rights of homosexuals or abortion laws, saying: "This is not on the agenda of ministers of foreign affairs."

He was also reluctant to talk about Poland's government being in trouble with the European Union over press freedom.

As part of the EU Charter, Poland is committed to media freedom. But according to a new media law, Poland's public broadcaster will be controlled by the treasury minister, a member of government, which has caused the EU to launch an investigation into Warsaw violating press freedom.

Waszczykowski claimed this was a domestic issue as well and was reluctant to answer questions on the matter. After being pressed again, he later said: "Public media are not independent," adding that in public media the opposition "was sometimes marginalized, the discourse was limited to those journalists who sympathized with the former government. So, we are just changing the status of the media, the ownership of the media, a little bit."

This is Michel Friedman's first show. Friedman joins DW's top political interview "Conflict Zone" as a host. He is a lawyer, university lecturer and renowned journalist with over 25 years of experience. Tim Sebastian, who has been the host of "Conflict Zone" since September 2015, and Michel Friedman will take turns in presenting the weekly DW show.

If its constitutional crisis continues much longer, Poland risks lawsuits in the European Court of Human Rights. With this in mind, the Council of Europe Secretary General has urged Polish lawmakers to end the crisis. (04.04.2016)

Poland is divided. The government says it wants justice, but its actions say otherwise. Confrontation between the government and its opponents is escalating. In the end, Poland can only lose, says DW's Rosalia Romaniec. (11.03.2016)

Article 5 of the North Atlantic Treaty

Article 5 of the North Atlantic Treaty

Waving the rainbow flag in Warsaw

Paying for populism in Poland?