Is NATO expansion to blame for Crimean crisis? | Europe | News and current affairs from around the continent | DW | 29.03.2014

The West's relations with Russia are at an historic low. This comes after years of NATO's enlargement policy in Eastern Europe. Should the military alliance have acted more cautiously? 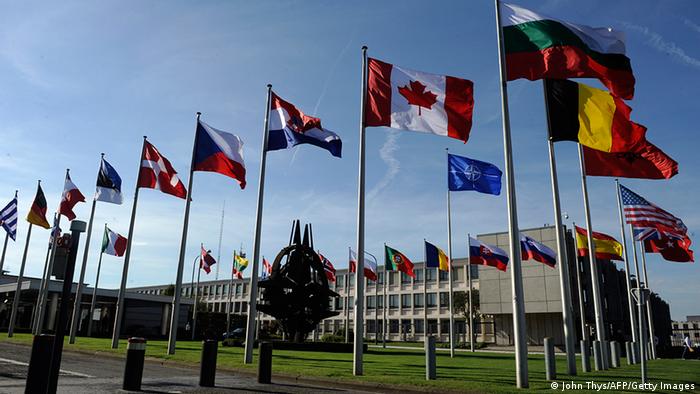 Jamie Shea likes to reference knowledgeable people. In the context of the NATO enlargement process, he quotes Irish playwright George Bernard Shaw, who said: "All great truths begin as blasphemies."

Ten years ago on March 29, 2004, NATO underwent the biggest enlargement in its history. Seven new member states in Eastern Europe joined the most powerful military alliance on the planet, some of them former members of the communist Warsaw pact.

"People said if you enlarge NATO, it will become dysfunctional. Of course the argument was it will potentially antagonize Russia," Shea told DW. He has been with NATO for more than 30 years and currently serves as Deputy Assistant Secretary General for Emerging Security Challenges.

In terms of Russian concerns, the enlargement process has been problematic. The Russians have always openly expressed their unhappiness at sharing borders with NATO members Estonia, Latvia, and Lithuania. In three rounds of enlargement between 1999 and 2009, NATO accepted 12 new countries in Eastern Europe and currently has 28 members in total.

Jamie Shea doesn't believe NATO could be perceived as a threat

Shea praises NATO's enlargement as a move away from "great-power politics" and stresses that the interests of smaller states were finally taken into account. Russia expert Stefan Meister agrees: "The new member states have gained a feeling of independence from Russia," Meister told DW. At the same time, the Senior Policy Fellow at the European Council on Foreign Relations added that expansion had made NATO’s relations with Russia more difficult.

"The NATO enlargement meant for Russia that it’s lost influence in the region. This explains the feeling of insecurity in Russia, of NATO coming closer." According to Meister, the Russian perception of an ever-growing NATO is also one of the key factors that caused the Crimean crisis. After Ukrainian President Viktor Yanukovych was removed from power, the Russians feared that "in the end they will also lose Ukraine to NATO and then NATO really would be knocking on the gate," said Meister.

Not so, says Shea. "I completely refute the notion that there is any link between NATO enlargement and the crisis in Crimea," he said. "My own view is that enlargement is a convenient excuse which can be used to justify unreasonable activities. It works in Russian domestic politics, maybe because of NATO’s historical image," said Shea, alluding to NATO’s Cold-War role as the natural enemy of the former Soviet Union. "The cause of Crimea is not NATO. It’s the collapse of the Soviet Union and nostalgia to reconstitute elements of that old political system."

Russia’s opposition to NATO enlargement was clear from very early on, says Julianne Smith, an expert on NATO and former deputy national security advisor to US Vice President Joe Biden. "The Russians often cited the enlargement as an example of the West breaking its 'promise' not to pursue these countries as members of the NATO alliance. They are under the impression that there was some prior agreement that this would not happen. The West would argue that it was perfectly legitimate to enlarge," Smith told DW.

In terms of the Crimean crisis, Smith said that "NATO enlargement happens to be one part of the debate, but it’s not singled out as the sole reason for tensions over Crimea."

According to the security expert, the West has received mixed signals from Russia over the past two decades. "It’s been hard to know at any given moment in history whether we were at such a low point that it would lead to something like the annexation of Crimea or just a rhetorical dispute as we’ve seen in many instances," she said. "I would say we’ve had peaks and valleys, which have been challenging for us in terms of determining where to take our strategy."

'No business as usual'

Notwithstanding the current conflict, there have been forms of rapprochement between Russia and the West. For example, a NATO-Russia Council was created in 2002, which, to a large extent, gave Russia NATO member rights. The only restrictions were on matters of collective defense and enlargement, for instance on the possible memberships of Georgia and Ukraine.

"For the two decades of NATO enlargement Russia has come closer to NATO, not the reverse. It’s not at all realistic to pretend that somehow NATO enlargement has posed a threat to Russia. Russia exercises with 150,000 troops on the Ukrainian border," said Shea.

For him it's clear that it can’t be business as usual with Russia now. "We’re seeking to de-escalate the situation, but at the same time the international community can’t just absorb the taking over the territory of an independent country without some type of response."

Overall, Julianne Smith assesses NATO’s enlargement favorably. "Personally, I’m a strong supporter of NATO enlargement. We have brought many countries back into their natural home as being members of European and transatlantic institutions." Meanwhile, Stefan Meister says it's crucial that NATO listens more closely to the signals the Russian leadership is sending. Especially the new Eastern European members understand how Russia works, he says.

Shea insists that NATO enlargement shouldn’t have been handled any differently. He criticizes the Russian government for not presenting an "accurate and honest picture of NATO inside Russia."

Shea thinks US journalist Thomas Friedman may have a valid point. The New York Times columnist once made the suggestion to "just change NATO's name." For Russians, he said, NATO is a four-letter word, which is often associated with profanity.

Obama: 'This is not another Cold War we are entering into'

US President Barack Obama has called on the West to remain united in its response to Russia’s annexation of Crimea, saying that "with time" Moscow will realize "that brute force" cannot win. (26.03.2014)

Harmony at the EU-US summit

The Ukraine crisis has brought the EU and the US together; the US has offered gas supplies to help decrease European dependence on Russia, which is supposed to understand the message. (26.03.2014)