A military build-up, bellicose rhetoric and the risk of nuclear war are ratcheting up tensions in Northeast Asia. The US is tied in a strategic knot and N. Korea is not backing down as diplomacy and deterrence collide. 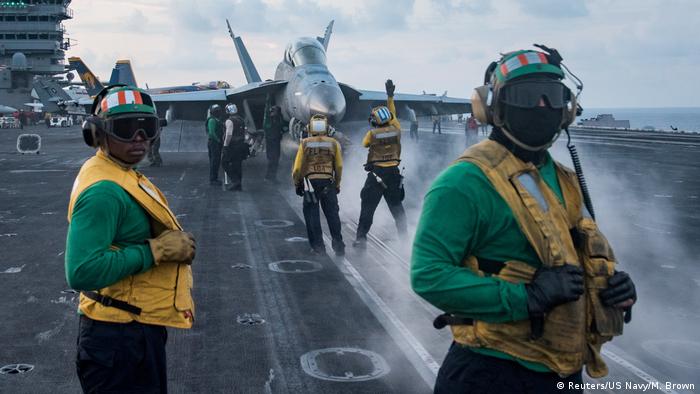 US to tighten sanctions on North Korea

The US aims to pressure North Korea into ending its nuclear and ballistic missile programs with tightened sanctions and diplomacy. Top officials hope to end the standoff peacefully, but have also raised military options. (27.04.2017)

Just weeks after agreeing to early deployment of a contentious US missile defense system, key components have been installed in South Korea. The system is being built in response to the North's ballistic missile program. (26.04.2017)

There are storm clouds gathering over the Korean peninsula. Whether it is the belligerent statements from the regime in Pyongyang, windy bravado from the Trump administration or regular missile tests and naval drills, there is concern around the world that a tipping point is about to be reached.

US Vice President Mike Pence delivered a speech last week aboard the carrier USS Ronald Reagan docked in Japan and said "the sword stands ready" when warning North Korea not to test US military resolve, adding that the US would respond with "overwhelming force" if attacked.

A few days later in response to US-Japanese naval drills in the Philippine Sea, the North Korean regime's official newspaper, Rodong Sinmun, said "our revolutionary forces are combat-ready to sink a US nuclear powered aircraft carrier with a single strike."

After it was announced that the same USS Carl Vinson carrier strike group would set sail to the waters off the coast of the Korean peninsula, North Korea responded by saying the deployment was "an extremely dangerous act by those who plan a nuclear war."

The Vinson will join the USS Michigan, a submarine equipped with up to 144 Tomahawk missiles, which arrived at the South Korean port of Busan on Tuesday. 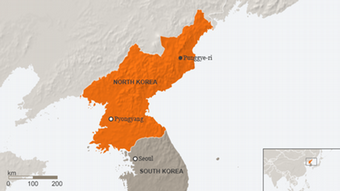 A deadly game of risk

So far, the latest tensions have yet to break the status quo, but there is a growing new flashpoint in the region that cannot be underestimated. North Korea's military capability is incrementally getting stronger and there is no sign that the regime will change the aggressive posturing that it sees as necessary to its survival.

On Tuesday, the North Korean military celebrated its 85th anniversary with a massive display of firepower. According to North Korea's official news agency, KCNA, it was the country's "largest ever" live-fire drill involving more than 300 large-caliber artillery pieces and submarine torpedo attacks on mock warships. KCNA said the drill demonstrated the regime's will to "pour a merciless rain of fire on the reckless imperialist US and its dirty followers."

Adding pressure is a more aggressive and provocative US foreign policy stance under President Trump, who said in an interview last month that the US would act unilaterally if necessary against North Korea. He also insinuated that preemptive military action was an option to counter Pyongyang's production of a nuclear-tipped missile capable of striking the US.

"The difference between Trump and Kim Jong Un is that Trump has no larger plan regarding North Korea and no nuanced view of when, how, why or how long military force is useful or effective," Katharine Moon, Chair of Korea Studies at the Brookings Institution, told DW.

"Kim has a larger plan, regime survival, maintenance of national pride, and resistance to US power. Trump changes his mind regularly; Kim does not," she added.

"People have put blindfolds on for decades, and now it's time to solve the problem," said President Trump at a meeting Monday with UN Security Council ambassadors during a discussion on new North Korean sanctions.

On Wednesday, the US announced that it was installing the controversial THAAD missile defense system at deployment sites located south of Seoul. Speaking to the House Armed Services Committee in Washington DC, the top US commander in the Asia-Pacific, Admiral Harry Harris said that the system would be operational in a few days.

In response to the threatening statements from Pyongyang, Harris also said that North Korea didn't have a weapon that could threaten the Vinson battle group. "If it flies, it will die," he said, referring to an attack on US warships.

North Korea's Defense Minister Pak Yong Sik said Monday during a "national meeting" in Pyongyang attended by thousands of officials that the country would use preemptive strikes to defend itself.

"I don't believe this level of tension is unprecedented," Roy Kamphausen, Director of the Washington office of the National Bureau of Asian Research (NBR), told DW. "In 1994, the risk of conflict seemed much higher, at least in part because the DPRK did not have a track record of bluffing and threatening as it now has for the last 20 years."

In June 1994, the US during the Clinton administration was close to striking the North Korean nuclear reactor at Yongbyon, before a diplomatic solution eased tensions.

More strategic patience will be needed 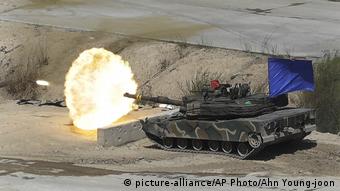 Despite threats of force, there are major limits for the US to acting preemptively when millions of people around Seoul are in range of conventional North Korean artillery, which is a simple, yet effective weapon.

"North Korea's artillery could inflict significant damage on Seoul," Kelsey Davenport, Director of Nonproliferation Policy at the Arms Control Association in Washington, told DW. "The country possesses a number of systems that are concentrated along the DMZ. Estimates put the number of artillery pieces at more than 11,000."

Davenport added that although the systems are aging and have a high failure rate, some could reach Seoul. Specifically, 300 mm multiple launch rocket systems can fire into the center of the capital. According to the US strategy think tank Stratfor, if every one of these were fired, a single volley could "deliver more than 350 metric tons of explosives across the South Korean capital, roughly the same amount of ordnance dropped by 11 B-52 bombers."

"Pyongyang doesn't need sophisticated new weapons to confront us with the sort of risk no one will be eager to take; their old ones still work just fine," John Schilling from the North Korea think tank 38 North wrote in a recent report.

A new kind of diplomacy? 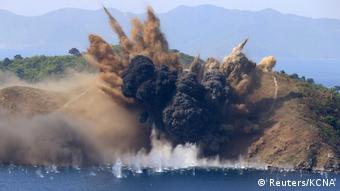 US Secretary of State Rex Tillerson will chair a meeting of the UN Security Council on Friday to discuss imposing further sanctions on North Korea. But most experts agree that the current diplomatic approach has failed miserably.

And amid the brave talk over the past week from Trump and Pence, action from the US resembles the same strategy of containment, diplomatic pressure and sanctions that have been the hallmarks of staggered US policy on North Korea for decades.

Moon said an untried strategy would be to isolate the regime with diplomatic sanctions and mobilize the General Assembly of the UN to suspend North Korea's participation, which would restrict its access and importance.

"The council must be prepared to impose additional and stronger sanctions on North Korean nuclear and ballistic missile programs," Trump told the UN Security Council ambassadors on Monday.

On Wednesday, Trump addressed the entire US Senate at an unprecedented meeting on North Korea at the White House and said the administration would be relying on Chinese economic leverage to pressure North Korea. On the same day, it was announced that the US would be tightening sanctions on Pyongyang.

"US military buildup so far is not part of a larger strategy, so it's not clear what the end game is for the US," said Moon, adding that the stated aim is to force North Korea to give up its nuclear program through military and economic pressure.

"That was the same ultimate goal for the administrations of George W. Bush, Obama, and now Trump," said Moon. "The Carl Vinson strike group cannot stay at the DPRK's doorstep indefinitely."

Satellite imagery of North Korea's nuclear test sites analyzed earlier this month by 38 North concluded that the Punggye-ri nuclear test site "appears able to conduct a sixth nuclear test at any time once the order is received from Pyongyang."

For the time being, the Korean knot remains firmly tied.