Iraq: US civilian killed in attack on military base

A US contractor is dead and several security personnel are injured following a rocket attack on a military base in Iraq. The US has threatened a 'decisive response' to any harm to Americans in Iraq. 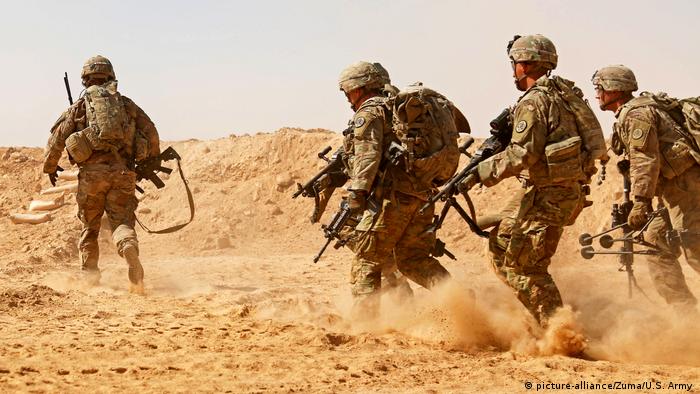 US officials have confirmed that the US civilian contractor died in a rocket attack on the K1 military base in northern Iraq on Friday.

"One US civilian contractor was killed and several US service members and Iraqi personnel were wounded in a rocket attack on an Iraqi military base in Kirkuk," they said in a statement.

As many as 30 rockets were launched into the military base on Friday afternoon. K1 houses a coalition of US and Iraqi military forces engaged in the fight against the "Islamic State" (IS) militant group in the region.

Iraqi forces are leading the response to the offensive. Security sources say a launchpad for Katyusha rockets was found inside an abandoned vehicle near the base.

Source of the attack

Several such attacks have taken place in Iraq in recent months.

IS has increasingly turned to insurgency-style attacks on security forces in the region, with the aim of toppling the Iraqi government, which declared victory over the terrorist organization in December 2017.

But US security officials have for the most part blamed Shiite paramilitary groups backed by Iran for the spate of attacks on Iraqi military bases. Tensions between Tehran and Washington have run high since the US pulled out of the 2015 nuclear agreement with Iran and reimposed economic sanctions on the country.

In December, US Secretary of State Mike Pompeo publicly blamed Iran for a series of attacks in Iraq, saying that any harm to Americans or allies would be "answered with a decisive US response."

After months of deadly protests, Iraq's parliament has approved a new election law that upends parts of the post-US invasion system. A prominent Shiite cleric said the law "will get rid of all corrupt parties." (25.12.2019)