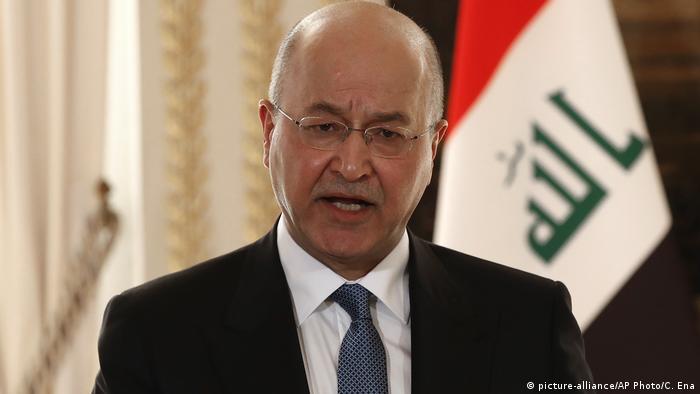 Iraq's president offered to resign on Thursday after he refused to designate the prime ministerial candidate put forward by a pro-Iran coalition.

In a letter to parliament, he said that in order "to avoid more bloodshed and maintain peace" he refused to nominate Asaad al-Eidani to the premiership.

As the decision may be interpreted as violating the constitution, he said members of parliament could decide whether to accept his resignation as "they see fit."

The governor of the southern Basra province, Eidani's name was put forward by the Bina coalition led by the Fatah bloc. The coalition includes leaders of the Iran-supported paramilitary Popular Mobilization Forces.

Protesters demanding an independent technocratic government devoid of established political elites they view as corrupt had rejected Eidani when he was put forward on Wednesday. Eidani had helped crush previous demonstrations in the oil-rich Basra province last year.

In Baghdad's Tahrir Square, a center of the protest movement, crowds cheered the president's announcement.

The protest movement emerged against corruption, economic woes and poor infrastructure but has increasingly directed its anger at Iran's influence in the country and the entire political class. At least 450 people have been killed and thousands wounded by security forces and militia since October 1.

According to Iraq's constitution, the largest bloc in parliament has the right to nominate the new prime minister, who then must be designated by the president.

Two deadlines to name a new prime minister following Adel Abdel Mahdi's resignation last month under pressure from protesters and Iraq's top Shiite cleric have been missed amid squabbling over which is the largest bloc in parliament.

The Sairoon list, led by Shiite cleric Moqtada Sadr, opposes Iranian influence and also claims the right to name the prime minister because it won the largest number of seats in 2018 parliamentary polls. But the numbers in the blocs have shifted since the election as a number of lawmakers left some blocs and joined others.

In reaction to Salih's move, the Sairoon bloc said it supported picking an independent premier.

"Stances giving precedence to Iraq's interests, over personal and class interests, are worth respect and appreciation. Iraq is more important than candidates," the bloc said in a statement.

It's unclear whether parliament will accept the resignation of Salih, who is viewed as a moderate, non-sectarian reformer with good ties with the West.

Either way, the move is likely to heighten political deadlock and polarization. After the announcement, the president flew from Baghdad to his hometown Sulaimaniyah in the northern autonomous Kurdish region.

"The president has found himself between the rock of the pro-Iran parties and the hard place of the people, but he chose to side with the protesters," political analyst Ahmed Younis told Reuters.

"By saying he is ready to resign he is responding to pressure from Iran and its allies, saying he would rather quit than be a scapegoat. He pulled the rug from under the pro-Iran parties and chose to stand with the protesters."

After months of deadly protests, Iraq's parliament has approved a new election law that upends parts of the post-US invasion system. A prominent Shiite cleric said the law "will get rid of all corrupt parties." (25.12.2019)

Hundreds of thousands of Shiite Muslims rallied in Baghdad under the scorching midday sun. Powerful Iraqi cleric Moqtada al-Sadr did not make an appearance.