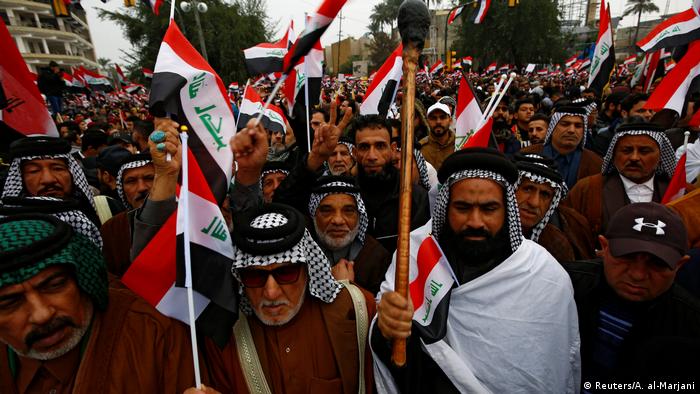 In a break from anti-government protests that have rocked Iraq in recent weeks, thousands of people rallied in central Baghdad on Friday in opposition to the continued American military presence in the war-ravaged country.

Loudspeakers blasted "No, no America!''

A heavy security presence was noted as protesters marched to the assembly point, waving Iraqi flags. Some wore symbolic white robes indicating they're willing to die for their country. One child was seen holding a poster reading, "Death to America. Death to Israel.''

''The American forces should leave," said an 18-year-old protester. "I am ready to fight against the Americans if Muqtada al-Sadr asks us,'' in a reference to the influential and radical Shiite cleric who called for "a million-strong, peaceful, unified demonstration" to demand the US troop withdrawal.

At least two people were killed and dozens more wounded later on Friday, hours after the mass protests had broken up. One of the victims was shot by a live round and the other hit by a military-grade tear gas canister, according to Agence France-Presse.

Roads and bridges leading to Baghdad's heavily fortified Green Zone, the seat of Iraq's government and home to several foreign embassies, were blocked off by concrete barriers.

Calls for US withdrawal

Sadr, whose party won the most number of seats in the May 2018 parliament elections, opposes all foreign interference in Iraq.

However, he has recently aligned himself more closely with Iran, whose influence has been increasingly felt in Iraq since the US-led invasion of Iraq in 2003.

Public anger over the US military presence was fueled by the US drone strike that killed Iranian general Qassem Soleimani and Iraqi paramilitary leader Abu Mahdi al-Muhandis outside Baghdad airport on January 3.

Two days later, parliament approved a nonbinding vote for all foreign troops — including some 5,200 US personnel — to leave the country.

Washington has yet to open talks with Baghdad on a troop pullout. But the US special envoy for Syria and the coalition against the "Islamic State" (IS) terror group, James Jeffrey, said operations against the jihadis had been put on hold after the drone strike. 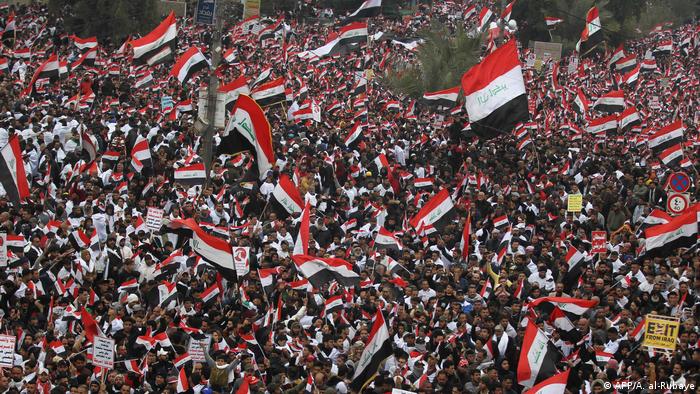 Sadr was, however, keen to keep his rally away from Tahrir Square, which has been the main focus of the long-running anti-government protests.

But public services are failing, unemployment is high and one in five people live in poverty, according to the World Bank.

Iran has built up of a network of allied militias across the Arab world over decades. In case of an open conflict with the United States, they might fight as its proxies. So far, they have been loyal to Tehran. (16.01.2020)