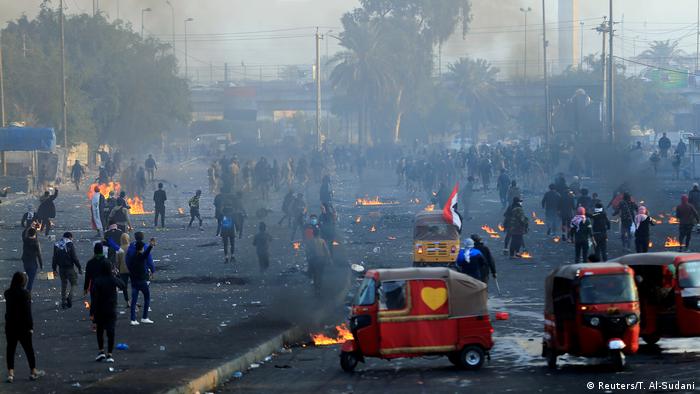 Iraqi security forces fired tear gas and live ammunition as protesters vented their anger toward the government late on Monday night and into Tuesday morning, with three killed in the clashes in Baghdad.

Numerous others were injured during the unrest. The violent confrontations in the Iraqi capital led to several parts of the city being closed off by authorities.

A gunshot wound killed one protester, while a second died after being hit in the head by a tear gas canister, medics said. A third later succumbed to his injuries.

Journalist Yousif Sattar, 21, who was covering the protest movement, was among the fatalities.

The brutal scenes were a return to the civil unrest that began in October. There had been a brief hiatus as tensions increased between the United States and Iran following a US airstrike that killed General Qassem Soleimani in Baghdad in early January.

Meanwhile, at least two rockets caused explosions near the US Embassy in Baghdad's high-security Green Zone, according to security sources and nearby witnesses.

Sirens could be heard across the area immediately after, but there were no immediate reports of casualties.

There has been a recent spate of similar attacks in and around the fortified Green Zone, particularly since the assassination of Soleimani at Baghdad International Airport.

As with the other incidents, the perpetrators were not known.

The Pentagon has denied any plans to exit Iraq, and a top general said the letter was sent by "mistake." Germany is preparing to "temporarily" move soldiers out of the country, according to media reports. (06.01.2020)

The foreign minister has condemned Washington's handling of the Iran conflict. Maas has advised following Europe's footsteps in diplomacy and called for further negotiations. (19.01.2020)

The head of the probe into the downed Ukrainian airliner says the recordings will be examined by Iran. His comments contradict those from a day earlier, according to which the black boxes would be sent to Kyiv. (19.01.2020)

Iranian officials have warned the US against launching another retaliatory attack. Iran's UN envoy also dismissed calls for cooperation from Trump as "unbelievable" considering the ongoing sanctions against Iran. (09.01.2020)

The German-Afghan man is accused of passing state secrets to the Iranian secret service while working as a translator and consultant to the German military. He faces charges of treason and violating state secrets. (20.01.2020)

The appearance of the supreme leader at Friday prayers comes at a tumultuous time for Iran, which had seemed on the brink of war with the US. The last time he led the sermon was in 2012 when he threatened Israel. (17.01.2020)

Iraq's political crisis has turned into some of the deadliest violence Baghdad has seen in years. Earlier, Shiite cleric Muqtada al-Sadr called on his supporters to end their protests, after a second day of clashes with the army and rival Shiite factions.