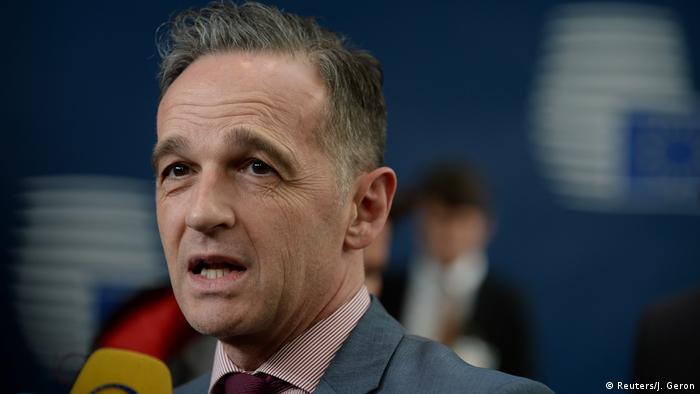 German Foreign Minister Heiko Maas criticized US President Donald Trump on Sunday for his policy of maximum pressure against Iran.

"We should not pretend that an externally induced regime change in Tehran will automatically improve the situation. That has gone badly elsewhere, like in Iraq," Maas told German newspaper Bild am Sonntag.

Since the US withdrew from the international nuclear deal in May 2018, tensions between Washington and Tehran have been running high.

The US targeted killing of top Iranian General Qassem Soleimani in early January followed by an Iranian retaliation attack on US military bases in Iraq has further strained the relations.

Maas added that "pure threats" and "military actions and threats" had not changed the behavior of the leadership in Tehran.

Read more: Opinion: Trump has Europeans caught in a trap

"If one wanted to improve the situation of the Iranians, it would be useless to stop the dialogue," Maas said. "We have to talk to Iran and demand that human rights be respected … We want to prevent a conflagration in and around the Middle East."

"The EU is counting on diplomacy instead of escalation," he said.  "Without the treaty, Iran would probably already have a nuclear bomb. It's imperative that we prevent that from happening."

Maas said that while the US withdrew from the nuclear deal and is pushing for maximum pressure against Iran, France, the United Kingdom and Germany wanted instead "to make progress through negotiations" and keep the treaty to prevent the possibility of an Iranian nuclear bomb.

The foreign minister called on Tehran to immediately return to complying with the 2015 nuclear agreement.

The nuclear deal was designed to allow Iran a nuclear program but disable nuclear armament. In return, economic sanctions would be lifted. In 2018, Trump ordered the termination of the deal and imposed a series of severe sanctions against the Islamic Republic.

Germany, France and the UK are still trying to save the agreement.

In response to recent US activity in Iran, Tehran is now openly violating the nuclear deal.

Maas also spoke out against Tehran's actions during citizen protests against the Iranian government.

"How the Iranian security authorities deal with the demonstrators is absolutely unacceptable and is clearly condemned by us. The leadership in Tehran must not deal with human rights the way they have done in recent weeks."