Ayatollah Ali Khamenei said Iran would not talk with the United States. In comments directed at President Rouhani, he said Iran's economic troubles were not only the result of sanctions, but also economic mismanagement. 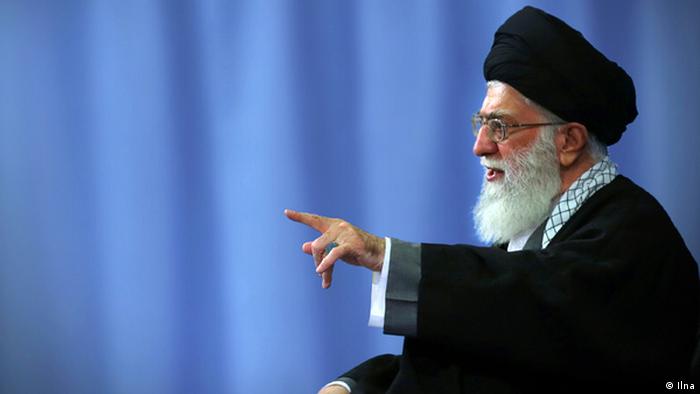 Iran's Supreme Leader Ayatollah Ali Khamenei on Monday rejected the idea of holding negotiations with the United States, but also said there would be no war.

"Recently, US officials have been talking blatantly about us. Beside sanctions, they are talking about war and negotiations," he said via his official Twitter account.

"In this regard, let me say a few words to the people: THERE WILL BE NO WAR, NOR WILL WE NEGOTIATE WITH THE US," he wrote.

The comments echoed those quoting Khamanei on Iranian television, in which he said, "America never remains loyal to its promises in talks ... just gives empty words."

Khamanei holds final sway over decisions in Iran, and the refusal dashes any notion of renewed negotiations with Washington after US President Donald Trump made off the cuff remarks suggesting he would meet with Iran's leaders.

The United States pulled out of the 2015 international nuclear accord with Iran in May and imposed the first tranche of renewed sanctions last week. In November, a second round of US sanctions on Iran's energy will go into effect.

The US withdrawal from the nuclear deal and renewed sanctions have hit Iran's economy, pummeled its currency and contributed to soaring inflation. The economic troubles have triggered protests directed at corruption and economic mismanagement.

The country's economic problems have put pressure on President Hassan Rouhani, a moderate whose administration has come under attack by hardliners in the clergy and Revolutionary Guard who had always opposed the nuclear deal.

With the nuclear deal and economy in tatters, Rouhani has little to show five years since he came to power.

In comments directed at Rouhani, the supreme leader said that the country's economic problems were not only the result of sanctions, but also of economic mismanagement and corruption.

"More than the sanctions, economic mismanagement (by the government) is putting pressure on ordinary Iranians ... I do not call it betrayal but a huge mistake in management," Iranian state TV quoted Khamenei as saying.

"With better management and planning we can resist the sanctions and overcome them," Khamenei said, in his first comments since US sanctions were reimposed last week.

Over the weekend, Khamenei signed off on a request from the head of the judiciary, Sadegh Larijani, to set up revolutionary courts to quickly and harshly deal with economic crimes and corruption. Sixty-seven people, including officials were arrested as part of the corruption crackdown.

Separately, the Atomic Energy Organization of Iran (AEOI) on Monday said it preferred the country to stay in the nuclear deal.

AEOI spokesman Behrouz Kamalvandi said that, although the United States unilaterally exited the accord, the European Union had politically and economically taken the side of the Iran.

If Iran left the deal, it would lose that support, he said.

"Therefore it would be better for us to stay in the nuclear agreement than to not stay," Kamalvandi said in comments to the ISNA news agency.

The 2015 nuclear deal was signed between the United States, Russia, China, Germany, France, Britain and Iran.

The EU has vowed to try to live up to the deal despite an early exit of European businesses from Iran. Russia and China are making moves to get around US sanctions, with Beijing working to capitalize on European firms' flight.

Donald Trump lashes out at Iran in all-caps tweet

In an escalating war of words, Trump told Iran's President Rouhani on Twitter to "NEVER EVER" threaten the US. The Iranian foreign minister shot back with a tweet telling the Trump to "BE CAUTIOUS!" (23.07.2018)