A proposed conference that stirred ire in Germany earlier this year is now slated to take place next week. Iran is behind the meeting, which is expected to be a platform for Holocaust deniers. 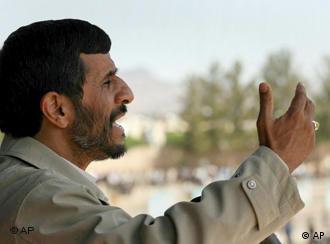 Iran's Ahmadinejad has called the Holocaust "a myth"

Iran's President Mahmoud Ahmadinejad has dismissed the Holocaust as a myth.

And last January, the Iranian government announced it would hold a conference on the Holocaust. It said it intended to invite academics such as German neo-Nazi Horst Mahler and the Israeli journalist and Christian convert Israel Shamir, both of whom are Holocaust deniers.

Back in January, Western politicians, especially in Germany, were up in arms at the plan -- although it was debated at the time whether the conference would actually take place, and what it was intended to provoke. Now, however, it seems clear that it will take place after all.

Iran's foreign ministry has invited scholars from 30 countries to discuss questions such as the scale of the Holocaust, and whether or not the Nazis really used gas chambers to kill Jews. 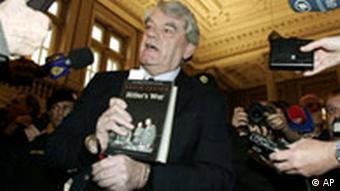 Deputy Foreign Minister Manouchehr Mohammadi said 67 researchers from countries including Britain, Germany and France would take part in the two-day meeting starting on Monday, according to Wednesday's Jomhuri-ye Eslami newspaper.

Not in attendance will be British historian David Irving. He was on the original invitation list, but is currently serving a three-year jail term in Austria for Holocaust denial.

Foreign Minister Mohammadi said the aim of the conference, dubbed "Holocaust, World Prospect," was to give scholars a chance to discuss the issue freely.

Holocaust denial is a crime in Germany and Austria

When the conference plans were firsted announced in January, German Green party chief Reinhard Bütikofer called it further evidence that Ahmadinejad was pursuing an "unrestrained policy of anti-Semitic indoctrination" in Iran.

Bütikofer said Ahmadinejad had used public statements questioning the legitimacy of the Holocaust to mobilize Iranian fundamentalists. This will lead, he said, to "the international isolation of the Iranian regime."

But speaking in an interview with German magazine Der Spiegel earlier this year, Gert Weisskirchen, the foreign affairs spokesman for the Social Democratic Party, warned western leaders not to be sucked into a further row with Iran as the so-called "Holocaust experts" could not be taken seriously.

As well as condemning the conference, German politicians were quick to point out that any Germans who spoke at the conference would have to accept the legal consequences. Holocaust denial is a criminal offence in Germany.

But according to Gerry Gable, the former editor of anti-fascist magazine Searchlight, "Iran obviously has no law against Holocaust denial and therefore if (anyone) speaks there they will not be punished."

In the first arrangement of its kind outside the US, American film director Steven Spielberg's Shoah Foundation granted a Berlin university access to its thousands of videotaped interviews with Holocaust survivors. (05.12.2006)

Iranian President Mahmoud Ahmadinejad has told German Chancellor Angela Merkel that the Holocaust may have been invented by the victorious Allied powers in World War II to embarrass Germany. (28.08.2006)