Iranian women defiant against compulsory hijab | Asia | An in-depth look at news from across the continent | DW | 06.02.2018

A new wave of protests against the compulsory wearing of hijab has spread across Iran, resulting in the arrests of dozens of women. The government has accused the protesters of being under the influence of drugs. 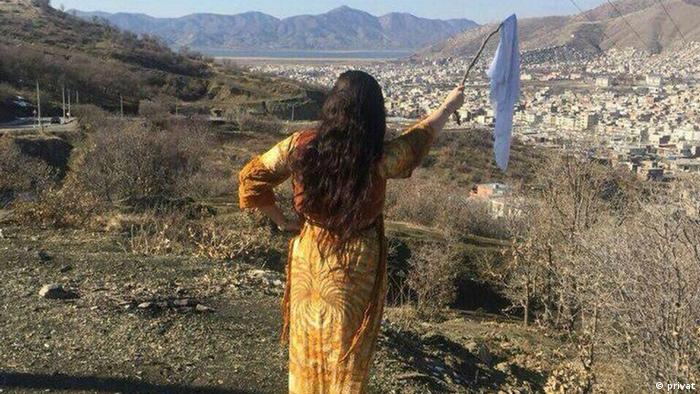 For almost four decades since the start of the Islamic Revolution in 1979, Iranian women have tried to push the boundaries of the compulsory hijab rule imposed upon them. Their struggle gained momentum late last year after a 31-year-old woman nicknamed the "Girl of Enghelab Street," stood bareheaded on a utility box on Enghelab (or Revolution) Street in Tehran, waving her white headscarf on a stick.

The woman, later identified as Vida Movahed, a mother of a 19-month-old child, is being hailed as a hero among Iranian women fighting against the compulsory hijab. Movahed's defiant protest and her subsequent arrest drew attention worldwide.

She was detained for several weeks before being released from custody on January 26.

Another Iranian activist, Narges Hosseini, was also arrested on January 30 for having followed suit on the same street, in an apparent act of solidarity with Movahed. Hosseini was imprisoned and her bail was set at $110,000 (€88,600).

Women who fail to observe the Islamic dress code in the Islamic Republic can be jailed for up to two months or fined about $100.

Movahed's act has been followed by a wave of defiant protests nationwide as pictures of women standing on benches or pedestals, waving their headscarves on sticks, have gone viral on social media. Internet users have dubbed them the "Girls of Enghelab Street" and their images are marked with the hashtag #دختران_خیابان_انقلاب (#girls-enghelab-street). In a show of solidarity, some men have also done the same.

But Iranian authorities have cracked down on the protesters, with reports suggesting that some 29 women have so far been arrested for flouting the dress code. Iran's Tasnim News Agency quoted the police as describing those arrested as "people who have been deceived by the 'My Stealthy Freedom' movement."

Speaking to Iran's semi-official ISNA news agency he said, "The first group has been deceived by others and can be set free after signing a commitment form. But the second group was organized by foreign-based groups and was under the influence of industrial recreational drugs."

Ejei went on to say that dire consequences await the second group.

'White Wednesday' and 'My Stealthy Movement'

Initiated on May 27, 2017, the "White Wednesday Campaign" encouraged women and men to wear white scarves or tie them round their necks and post their photos on social media platforms as a show of protest against the compulsory hijab in Iran.

The color white was deliberately chosen by the founder, Masih Alinejad, as a symbol of peace as opposed to "the black color of force."

Alinejad, a female journalist in exile, also initiated "My Stealthy Freedom," an online movement inviting women in Iran to post pictures of themselves without headscarves in public places.

Some connect the latest protests with the recent campaigns against the compulsory hijab, but gender expert Nayereh Tohidi from the California State University views these sporadic peaceful protests as part of the history of the women's rights movement in Iran.

"These young women have reached a level of maturity in social development and are now exerting their identity. Therefore, for them the issue of the hijab becomes more existential," Tohidi told DW.

But not everyone shares the view that the issue of mandatory hijab is the most important problem facing Iranian women. Anthropologist and researcher Kameel Ahmady believes that the demand to do away with the compulsory hijab is not applicable to all women in Iran. "The hijab is not an issue for women in smaller cities and rural areas and the concern is limited to modern women in larger cities," Ahmady told DW.

Although the protests against the compulsory hijab in Iran have been politicized, this has not demoralized women activists, some observers say.

Instead, they claim, it has emboldened them to be more vocal with their demands. "It is the Islamic Republic which has made the hijab an important issue. They have been so obsessed with women's hair and bodies that they have spent millions of dollars to create state organs to control women's dressing," said Tohidi.

In this way, a basic civil right has been misconstrued as a political demand, making it easy for the government to accuse women activists of political motivations. "The mandatory hijab is the Achilles heel of the Iranian regime," Tohidi stressed.

"Those who have been fighting for women's civil rights for decades have been accused of Westernization and having political motivations. Even if the current protests remain as campaigns, it will evolve into other forms later," Ahmady said.

"It depends on how the actors involved are going to interact with each other. It depends on international support and the visibility these protests achieve. The higher the visibility, the more women will be encouraged to become involved," Tohidi noted.

The important question raised here is whether Iranian society is ready for doing away with the compulsory hijab or if doing so will expose women to increased street harassment and violence?

Gender specialist Tohidi underlined it should be up to the women to decide what to wear and how to cover themselves to guarantee their safety. She added that the protesters were not demanding for the hijab to be banned but rather for it to be non-mandatory.

"If there are fanatics who might harass women for not wearing the hijab, it is the duty of the security forces to protect women," she said.

Ahmady, however, argued that Iranian society was not yet ready for this change. "Any rule change without appropriate changes in the educational and cultural landscape would result in societal intolerance, which could manifest itself in the form of sexual harassment on the streets and violence against women."