Iranian man sets himself on fire in German government building after being denied asylum | News | DW | 29.05.2018

The man sustained serious injuries in the incident as government employees watched in horror. Authorities assume he intended to kill himself after having asked for help with his asylum status. 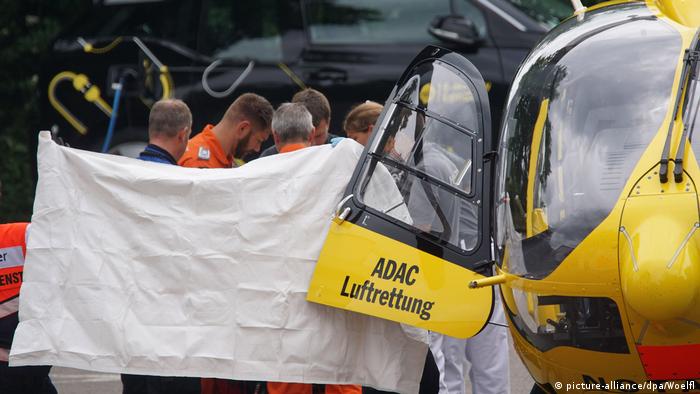 On Tuesday, a 35-year-old Iranian man entered an administrative building in the city of Göppingen in the German state of Baden-Württemberg and asked for assistance, showing employees there a government letter denying him asylum. Although the women assured him they would look into the situation, the man reportedly became aggressive.

He then proceeded to remove a bottle containing liquid out of his backpack, pour it over his head and light it. Police say that the women were able to get to safety before the man went up in flames. Another government employee used towels from a cleaning cart to put out the fire. Police in the nearby city of Ulm say the man, who was flown to a burn clinic, sustained serious injuries.

Günter Stolz of the Göppingen finance department told the German dpa news agency that employees had been shocked by the events that unfolded in the building's foyer: "A lot of people heard the man screaming." The building had to be partially evacuated after the incident and was eventually closed to the public for the remainder of the day.

Senegal: Opposition calls for more protests after days of deadly clashes 7h ago