The supreme leader's health is in question following the second reported infection of someone close to him. The case comes amid a slew of infections in Iran's highest levels of leadership. 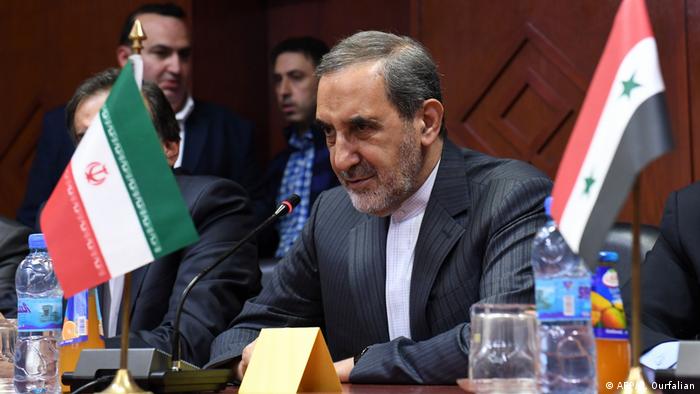 Iranian Supreme Leader Ayatollah Ali Khamenei's health has been put under the spotlight again after his top advisor, Dr. Ali Akbar Velayati, on Thursday tested positive for the novel coronavirus, according to Iranian news outlets.

Last month, he was quoted by state television as saying that the epidemic was not more life-threatening than a wave of the flu.

"Thank God, the Islamic Republic, its Ministry of Health and medical and educational centers have succeeded in defeating the coronavirus," he said.

The diagnosis follows a trend in Iran of top officials contracting the virus or having contact with those who do. So far, dozens of Iranian politicians have the virus, with some cases resulting in death.

On March 3, another Khamenei advisor died of coronavirus. Seyed Mohammad Mir-Mohammadi, 71, died at the same hospital that the infected Velayati is the president of. A few days prior, his own mother died after contracting the virus, according to the Tehran Times.

Last month, Deputy Health Minister Iraj Harirchi was seen sweating and wiping his forehead on a national television address, in which he denied covering up the scale of the outbreak. He appeared to be in physical discomfort as he addressed reporters, and a few days later publicly announced that he had the virus.

The Vice President of Iran for Women and Family Affairs, Masoumeh Ebtekar, also contracted the virus, and has been spotted on television sitting next to Iranian President Hassan Rohani.

Meanwhile, Esmail Najjar, the chief of Iran's Crisis Management Organization, is infected and is in self-quarantine after several days of treatment in hospital.

The deceased advisor, Mir-Mohammadi, was from Qom, Iran's holy city and the epicenter of the outbreak. Experts believe that the city is seeing such a high number of infections partially because of the practice of kissing shrines, which is seen as a form of healing. The city attracts millions of religious pilgrims every year.

Last month, following a phase of widespread official denial of the dangers of the virus and the first wave of health warnings, some Twitter users in Qom began filming themselves licking holy shrines. "I'm not scared of coronavirus," said one of the Twitter users, before licking and kissing the gates of the Masumeh shrine in Qom.


Another, in the northeastern city of Mashhad, wrote that he was  there to lick the shrine "so the disease can go inside my body and others can visit it with no anxiety." Those users are now facing jail time for the posts.

Despite government recognition of the coronavirus, many people suspect that the infection and rate of death in Iran continue to increase at a rate much higher than officials are reporting.

Videos of trenches being dug in Qom, shared by the New York Times, as well as satellite images of mass graves in the city, suggest that the outbreak is particularly severe in Qom, while officials have not offered an official number of deaths for the three infected cities of Tehran, Qom and Rasht.

The satellite images show that two large pits were dug in a major cemetery in the city, just 80 kilometers away from Tehran.

Information and images leaked to the Washington Post also suggest that another part of the same cemetery has already been used to bury a large number of coronavirus victims.

The severity is also indicated by Iran'srequest for International Monetary Fund assistance. The situation is "very dire," according to DW reporter Theresa Tropper. "The virus might now push them (the Iranian economy) over the edge."