Iran tankers come to the rescue of oil-starved Venezuela | Business | Economy and finance news from a German perspective | DW | 27.05.2020 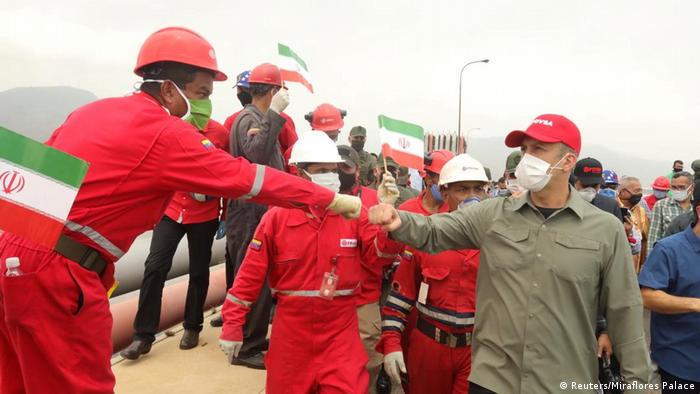 The tanker, part of the flotilla carrying 1.5 million barrels of gasoline from Iran, was escorted by Venezuelan naval frigates and helicopters as it entered the nation's exclusive economic zone. The third of the five-tanker flotilla also entered national waters on Tuesday.

Venezuelan Oil Minister Tareck El Aissami tweeted pictures of the Iranian-flagged tanker, the Forest, and the crew upon their arrival at the Venezuela port.

The first of Iranian tankers, the Fortune, arrived at a port serving the El Palito refinery, on Monday in a show of defiance by both Tehran and Caracas, which are under US sanctions. The cargo, which includes additives and crucial spare parts for crippled Venezuelan refineries, is expected to increase fuel distribution and boost refinery output in the country, where an acute shortage of petrol is forcing people to line up for days at gas stations or walk miles to work.

"Thank you, Iran," Venezuela's leader Nicolas Maduro said on Twitter on Sunday just moments before the Fortune docked. "The end of Ramadan brings us the arrival of the ship Fortune, a sign of the solidarity of the Islamic people of Iran with Venezuela. In times where the supremacist empire intends to impose its rule by force, only the brotherhood of free peoples will save us."

The Venezuelan economy has been in shambles for years with inflation going through the roof, hurt by political instability, corruption and US sanctions. People have had to endure shortages of basic necessities such as food and medicines, which have forced millions to flee the country.

US sanctions have mainly targeted Venezuela's oil industry – once one of the world's biggest – battering the country's primary source of revenue. Oil production in the country has fallen to nearly a quarter of levels seen in 2008. Venezuela's plight has worsened with a drastic drop in global crude oil prices amid the coronavirus crisis. The price of Venezuelan crude has fallen to less than $10 a barrel, its lowest level in more than two decades, and well below last year's average price of $56.70. 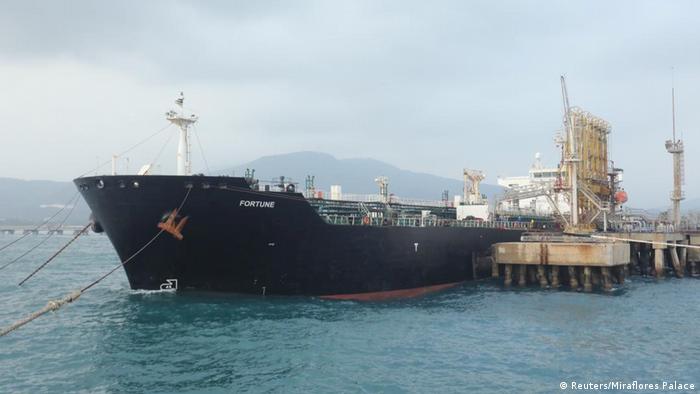 The Iranian tanker ship Fortune is seen at El Palito refinery dock in Puerto Cabello, Venezuela, on May 25, 2020

Venezuela, which sits on the world's biggest oil reserves and boasts one of the biggest refiners in the region, has seen its 1.3 million barrel-per-day refining network collapse due to lack of investments, corruption, power failures as well as US sanctions.
Caracas had for months managed to import much needed gasoline by delivering crude oil to its customers, including Russia's largest oil producer Rosneft. But it was dealt a blow earlier this year when the US imposed sanctions on two Rosneft oil trading units for doing business with Venezuela. In March, the Russian oil major in a surprise move exited Venezuela, selling all of its assets in the country, albeit to a company wholly owned by the Russian government.

Iran to the rescue

The country's refining capabilities got a boost in May, following the arrival of spare parts supplied in flights by Iran's Mahan Air, Reuters news agency reported, citing anonymous sources. The crude processing rate rose to about 215,000 barrels per day (bpd) from 110,000 bpd in March. But that has not done much to ease fuel shortages in the country, where petrol has had to be strictly rationed.

The latest Iranian cargo are not expected to completely bridge the shortfall but are being viewed as a major reprieve in the current situation. Experts say the 1.5 million barrels of gasoline were only enough to last a few weeks to a month at current consumption levels.

The US has stepped up sanctions aimed at ousting Maduro in recent months. In March, it charged the Venezuelan leader and several members of his inner circle with drug trafficking and "narcoterrorism" among other things and offered a $15 million bounty reward for information leading to Maduro's capture and prosecution.

Washington and dozens of other countries accuse Maduro of wrongfully holding on to the presidency and instead recognize his opposition rival Juan Guaido as interim president.

The US has said it was monitoring Iranian oil shipments to Venezuela. A flotilla of US Navy and Coast Guard vessels is patrolling the Caribbean Sea on a mission to counter illicit drug trafficking, but it does not seem to have interfered with the first three vessels.

Venezuela to escort fuel tankers from Iran despite US threat

Venezuela’s defense minister said he was thankful for Iran’s solidarity as the coronavirus pandemic adds to its economic woes. Venezuela has the world’s largest oil reserves, but its capacity to refine is limited. (21.05.2020)