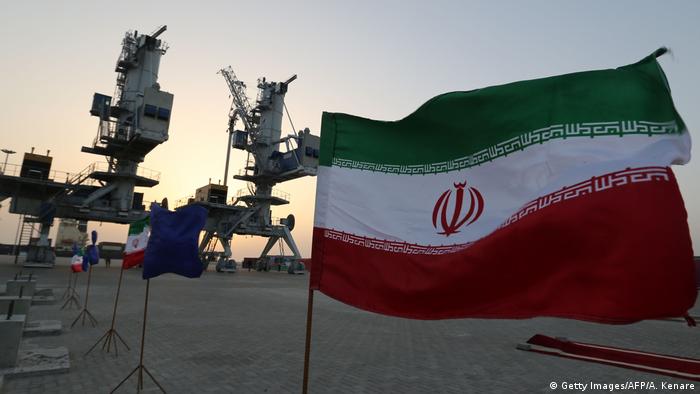 Iranian foreign minister Mohammad Javad Zarif wrote to the UN Secretary-General Antonio Guterres on Sunday, warning against "America's movements in deploying its navy to the Caribbean.”

Zarif complained that the US intention was to "intervene and create disruption in the transfer of Iran's fuel to Venezuela."

Read more: US blacklists companies over oil trade with Iran

The Iranian deployment consists of five tankers carrying around $45.5million (€42 million) of gasoline and related products, as part of a wider deal between Iran and Venezuela. The US has imposed sanctions both nations' oil exports.

At the same time, Iran's Deputy Foreign Minister Abbas Araqchi warned the Swiss ambassador to Tehran, which represents US interests in Iran, against any US threat against the Iranian tankers.

Araqchi said any potential threat to the vessels would be met with a quick and decisive response.

Venezuela has one of the largest oil reserves in the world, but the country — in the midst of a severe economic crisis — is in need of gasoline and other related products.

'US won't stay in Iraq and Syria'

Meanwhile, Iran's Supreme Leader Ayatollah Ali Khamenei on Sunday renewed Iran's demand for US troops to be withdrawn from the Middle East.

Iran almost got into a full-blown conflict with the United States when a US drone strike killed top Iranian military commander Qassem Soleimani in Bagdad on January 3, prompting Tehran to retaliate with a missile barrage against a US base in Iraq days later.

Khamenei said Americans' actions in Afghanistan, Iraq and Syria had led to them being hated, according to a transcript of a speech to students published on his website.

"The Americans won't stay in Iraq and Syria and will be expelled," Khamenei said.

The US and Iran have both taken sides in the Syrian conflict, with Washington previously backing Kurdish forces against the "Islamic State" (IS) militant group, and Iran supporting the ruling government in Damascus. Both the nations have also been heavily involved in Iraq since the toppling of the government of Saddam Hussein in 2003.

In 2018, US President Donald Trump had withdrawn from a multi-nation nuclear deal with Iran, and imposed heavy sanctions on the country's economy.

Will Iran weaponize oil to retaliate against US?

The killing of a top Iranian general by the US followed by a threat of retaliation from Iran has rattled oil markets. What options does Tehran have up its sleeve, if it chooses to retaliate by disrupting oil supplies? (06.01.2020)