Iran′s economy plummets under weight of sanctions | Asia | An in-depth look at news from across the continent | DW | 23.10.2019

After two years of successive contraction, recent reports paint a grim outlook for Iran's economy in 2020. Widespread sanctions have hit the economy hard and ordinary Iranians are bearing the burden of a recession. 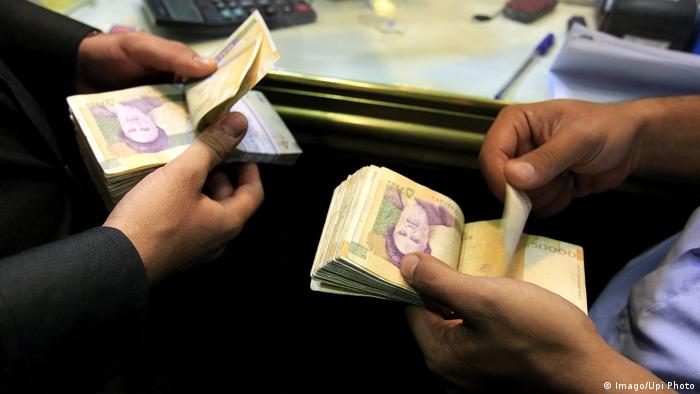 Economic indicators for Iran released recently by the International Monetary Fund (IMF) and the World Bank show the impact sanctions have had on the country's oil-fuelled economy. In its World Economic Outlook report published in October, the IMF said Iran's economy would contract 9.5% this year.

In an economic update on Iran published on October 9, the World Bank came up with a similar figure of 8.7% contraction for the Iranian economy in 2019 due to "plummeting" oil and gas exports, along with new sanctions being imposed on Iran's metals, mining and maritime sectors.

The World Bank said the expected deterioration in growth means that by the end of 2019, Iran's economy will be 10% smaller than what it was two years ago.

Although the IMF and the World Bank predict between 0 and 0.5% growth in 2020, this is starting from a much smaller base, and is contingent on Iran being able to export 500,000 barrels of oil every day.

After international sanctions were lifted in 2016 under the nuclear deal known as the Joint Comprehensive Plan of Action (JCPOA), Iran experienced burgeoning growth at more than 13%, with 2017 oil revenues of $57.4 billion (€51.6 billion) on the back of increased export volume, according to the IMF.

Then in May 2018, the US under President Donald Trump withdrew from the deal, and in November 2018 fully re-imposed broad unilateral sanctions targeting nearly every sector of Iran's economy.

The IMF report from October 2019 shows skyrocketing inflation rates in Iran of 35.7%, meaning that the average price of consumer goods over the past year has increased by that percentage. The World Bank said that these increases have "disproportionately affected the rural population" and are especially high for food items.

The Statistical Center for Iran (SCI) issued an even more pessimistic assessment with an overall inflation rate of 47.2%, with rates as high as 63.5% for food and fuel.

Iranian experts say the inflation rates people are most affected by in the country are those of essential goods.

"When people spend a major part of their income on necessity goods they have not much money left for anything other than that," said Ehsan Soltani, an Iran-based economist, adding that there isn't much money left for people to spend on other kinds of goods, which leads to severe economic stagnation.

At the end of August 2019, the SCI reported inflation rates of about 60% for food, drinks and tobacco over the previous year. According to the same report, the average price of housing per square-meter rose by 82%.

"When you put these inflation rates next to the projected negative economic growth, you have 'stagflation,'" which simply means stagnation plus inflation, said Sara Bazoobandi, nonresident senior fellow at Atlantic Council, a think tank in Washington.

"It means people who don't have money see their costs rise up to 40%. It's a social and economic disaster."

Although SCI said Iran's unemployment rate dropped to 10.5% in September, it seems that the reduction of unemployment has more to do with how employment is defined, rather than job creation.

A new definition says that Iranians aged 15 and above who work at least one hour per week are counted as being employed. Youth unemployment is also at a high 26%, in a country of 80 million people where 40% of the population is under 25.

"In a single-product oil economy like Iran's, where the government is the main job provider and oil exports are restricted by sanctions, government investments will decrease, and consequently more jobs will disappear," said Bazoobandi, adding that this causes delayed wages, layoffs and regular government worker strikes.

What can Tehran do?

The publication of IMF report and the negative projections for Iran's economy unleashed a wave of criticism and mocking of President Hassan Rouhani by Iranians on different social media platforms.

Iran's politicians try to avoid talking about the country's dire economic issues. The day before the IMF report was published, Rouhani gave a speech about overcoming the "storm" and moving toward economic improvement.

However, with Trump's "maximum pressure" sanctions policy continuing, and with no concrete policy proposals from Tehran addressing the dismal economic forecast projections, Iranians are likely to face more hardship in 2020.