Iranians took to social media to protest the planned execution of three young protesters, under the hashtag #Don'tExecute. The men had taken part in last year's mass demonstrations against a fuel price hike. 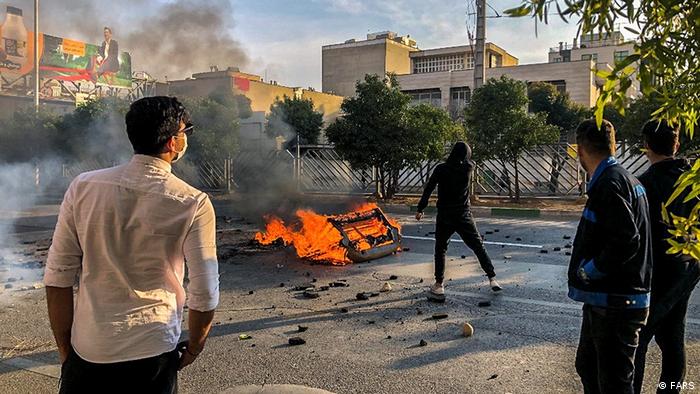 Iranian netizens took to Twitter and other social media platforms to protest and express their opposition to the death penalty handed to three young Iranian men for taking part in anti-government demonstrations last year.

Opponents of the verdict tweeted the hashtag #Don'tExecute in Farsi, and #StopExecutionsInIran in English, with well-known figures including Oscar-winning filmmaker Asghar Farhadi, journalist Masih Alinejad, and the exiled Prince Reza Pahlavi, joining the calls to stop the planned executions.

"It is the fire under the ashes that will one day conquer the streets of Iran again,” Alinejad wrote on Twitter.

"Do not make people even more bitter in this sad time," Farhadi wrote on Instagram.

"To the criminal regime & its leader: The execution of every protester & political prisoner only strengthens the criminal case against you," Pahlavi wrote on Twitter. "Know that the Iranian nation will not tolerate the execution of these young protesters. Stop your crimes against humanity."

Ismaili did not say when the men would be executed. The spokesman rejected criticism of the death penalty at a press conference, saying that the men were violent ringleaders of the protests and had set fire to a number of buildings and transport facilities. They had also recorded their actions on their phones, he said.

Once a death penalty is confirmed by the Supreme Court, the decision is final, and can only be overturned by Iranian Supreme Leader Ayatollah Ali Khameini.

Amnesty International also slammed the verdict, tweeting that Khameini must quash the execution immediately, and that the men "were subjected to torture through beatings, electric shocks and being hung upside down."

Users also reported slower internet connections amid the social media outcry. Internet disruptions are a common tactic used in Iran, to slow the spread of information and curb dissent.

Iran was rocked by days of unrest over a hike in fuel prices in November of last year. Over 1,000 demonstrators were arrested at the time, while by some estimates, between 200 and 400 people were killed and thousands injured.

Amnesty International placed the number of those killed in the protests at 304, and a senior Iranian lawmaker said in June that 230 had been killed. The government also ordered a week-long internet blackout to suppress the demonstrations, which saw gas pumps torched, police stations attacked and shops looted.

Iranian authorities are reportedly mulling a ban on Instagram, a popular social media platform in the Islamic country. DW analyzes why the hardline Shiite regime continues to feel threatened by the power of the internet. (23.06.2020)

A pro-government march has been organized in the capital in response to international criticism of Iranian authorities. Tehran has said it would severely punish any "mercenaries" arrested for causing civil unrest. (25.11.2019)

The German man had been sentenced to three years in prison for taking pictures of "sensitive places." He was freed after German authorities released an Iranian citizen wanted in the US over alleged sanctions violations. (18.02.2020)