A pro-government march has been organized in the capital in response to international criticism of Iranian authorities. Tehran has said it would severely punish any "mercenaries" arrested for causing civil unrest. 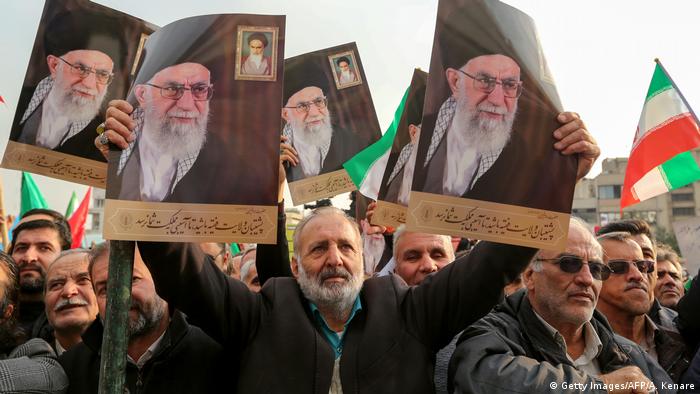 Iran's Foreign Ministry has said a pro-government rally in Tehran's Enghelab Square on Monday condemned "rioters" and showed the world who the "real" Iranians are and "what they are saying," after foreign leaders expressed support for recent protests against Iran's rise in fuel prices.

On Sunday, Iranian authorities announced they would punish what they called "mercenaries" arrested over causing civil unrest, adding that calm has been restored to the country.

"We recognize the right to peaceful assembly," said Foreign Ministry spokesman Abbas Mousavi in remarks on state television. "But the situation is different for rioters ... and groups which take direction [from abroad] and are armed."

"We are surprised that the foreign minister of a certain country has stooped so low as to ask for videos of bank burnings ... be sent to them," Mousavi said, referring to a request by US Secretary of State Mike Pompeo for Iranian protesters to send Washington any photos or videos of crackdowns on demonstrators.

"The United States will publicize and condemn the persecution of protesters," Pompeo said at the time.

Mousavi was not the only one to speak out against perceived verbal attacks from the US. The head of Iran's Revolutionary Guard, General Hossein Salami, claimed the US and its allies were stoking the fires of discontent. As he addressed the pro-government demonstrators on Monday, he echoed Mousavi's sentiments when he said the rise in fuel prices was a "mere pretext" for an attack on Iran.

"If you cross our red line, we will destroy you," he said. "We will not leave any move unanswered."

Rights group Amnesty International announced last week that Iranian security forces had shot into protest crowds from rooftops and from a helicopter.

Following reports of the high number of deaths during the protests, the French government also called on Iran to comply with international human rights. 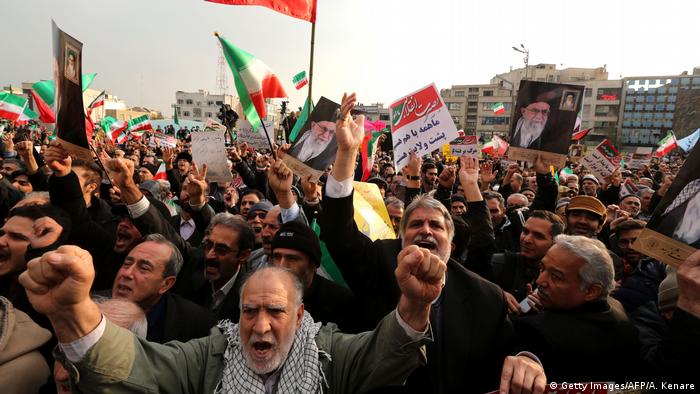 'I recommend [foreign countries] look at the marches ... to see who the real people in Iran are': Foreign Ministry spokesman

Iranian civilians began demonstrations on November 15, hours after the government's sudden announcement that petrol prices were being raised by as much as 200% with immediate effect.

Tehran justified the price spike by saying it would allow the government to provide welfare payments to those in need, following the severe side effects of US-reimposed sanctions after Iran withdrew from the 2015 nuclear deal.

Demonstrations grew into anti-government protests and took a violent turn, with banks, petrol stations and dozens of buildings set on fire and shops looted. Highways were also blocked.

Tehran then imposed a near-total internet blackout for a week in an attempt to prevent the circulation of videos showing violence. Connectivity returned Sunday across much of the country with the exception of mobile telephone networks, which were still partially disrupted, according to NetBlocks, a web connectivity watchdog.

Mousavi had compared the internet block to "turning off gas pipes if there is a city-wide fire," saying it was done for security purposes.

Amnesty International said more than 100 demonstrators were believed to have been killed and that the real toll could be as high as 200. Iran has rejected death toll figures as "speculative" and confirmed five deaths in the unrest.

Iran has blamed "thugs" linked to exiles and countries — including the United States, Israel and Saudi Arabia — for igniting unrest. Authorities have said about 1,000 protesters have been arrested. The New York-based Center for Human Rights in Iran said the number was likely closer to 4,000.

"We have arrested all stooges and mercenaries who have explicitly made confessions that they have been mercenaries of America, of Monafeghin and others," said Rear-Admiral Ali Fadavi, the deputy commander in chief of Iran's Revolutionary Guards. Monafeghin refers to the People's Mujahedeen of Iran (MEK), an opposition group in exile.