The Saudi-led military coalition threatened a firm response to a Houthi missile attack on an airport, which injured at least 26 people. The attack came just hours before Japanese Premier Shinzo Abe landed in Tehran. 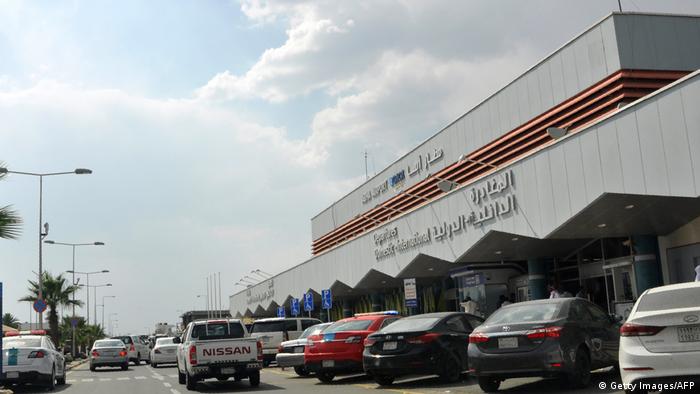 A statement by the Western-backed Saudi coalition on Wednesday said a missile fired by Iran-backed Shiite Houthi rebels in Yemen targeted the arrival hall of the Abha airport in southern Saudi Arabia. The attack reportedly wounded 26 people, including three women and two children.

The Houthis confirmed they fired a cruise missile at Abha airport, which is about 200 kilometers (125 miles) north of the Yemen border.

Saudi Arabia said the missile attacked amounted to a war crime and that it would respond "urgently and timely."

"This attack also proves this terrorist militia's acquisition of new special weapons; the continuation of the Iranian regime's support and practice of cross-border terrorism…," the coalition said.

Read more: Saudi Arabia will defend itself 'with all force' but doesn't want war

Saudi allies, Bahrain and Egypt, condemned the missile attack and called for an immediate halt to all attacks on Saudi territories.

It was the third major armed attack by Houthis inside Saudi Arabia in the past few weeks, with the Yemeni rebels targeting two oil-pumping stations  and launching a drone attack on Najran airport in May.

Wednesday's attack came just hours before Japanese Prime Minister Shinzo Abe landed in Tehran — seeking to ease tensions between the US and the Iranian regime. Riyadh and Washington accuse Tehran of supporting armed militias across the Middle East.

Yemen has been torn apart by a protracted civil war between the internationally recognized government of President Abed Rabbo Mansour Hadi and the Shiite Houthi rebels. In support of the Hadi government, Riyadh launched an air campaign against the Houthis in March 2015. Saudi Arabia accuses Iran of backing the rebels, who have made significant territorial gains in the impoverished Middle Eastern country.

At least 10,000 people have been killed and more than 3 million people have been displaced since the start of the conflict. Around 80% of Yemen's population is in urgent need of aid, and millions of people have problems accessing water, according to the UN.

A Houthi military spokesman said Wednesday the attack on Abha airport was a response to the Saudi coalition's "crimes" against Yemen.

"The most modern American systems could not intercept the missiles," he said in comments carried by the rebels' media center.

International pressure has mounted for the two sides to end the conflict. The United States has called for a ceasefire and reduced some of its logistical aid for the Saudi coalition, while Iran has also signaled support for the peace talks.

Houthi rebels are withdrawing from three ports in line with a ceasefire deal that was agreed to in December. But the Saudi-backed Yemeni government has dismissed the pullout from Hodeida as a "show." (11.05.2019)