Houthi rebels are withdrawing from three ports in line with a ceasefire deal that was agreed to in December. But the Saudi-backed Yemeni government has dismissed the pullout from Hodeida as a "show." 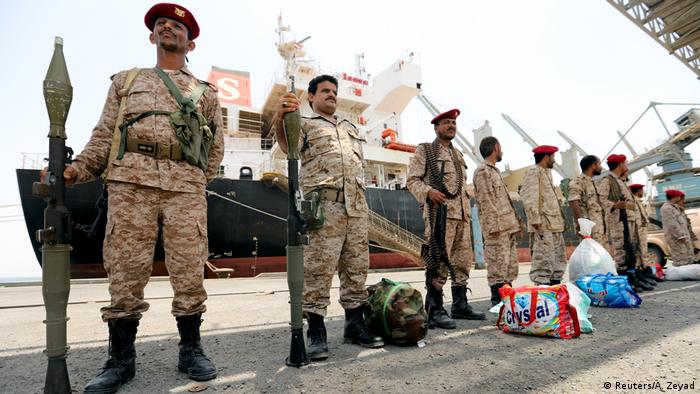 Yemen's Houthi rebels began pulling back from three ports on Saturday, the first steps on the ground since a ceasefire deal was agreed.

The withdrawal of rebel forces, delayed since January, was expected to be complete by Tuesday, General Michael Lollesgaard, head of a UN redeployment committee, said in a statement.

The Danish general said he welcomed "the offer and intention" of the Iran-backed Shiite rebels to withdraw from the three lifeline ports.

The pullout was part of an accord, seen as the best hope in years of ending the war, reached in Sweden last December. A UN observer mission, led by Lollesgaard, is set to monitor and report on the Houthi redeployment.

The Houthi representative in a joint coordination team, Brigadier Mohammed al-Qaderi said via Twitter: "We have implemented all obligations of the first phase of redeployment. The UN must commit the other side to implement its obligations."

However, later on Saturday information minister Muammar al-Iryani for the Saudi-backed Yemeni government dismissed the pullout from Hodeida as a "show" intended to "disinform the international community."

Provincial governor Al-Hasan Taher told AFP "The Houthis are staging a new ploy by handing over the ports of Hodeida, Salif and Ras to themselves without any monitoring by the United Nations and the government side."

A Sunni-Muslim coalition led by Saudi Arabia intervened in Yemen in March 2015, to push back against an advance by the rebels and restore power to President Abed Rabbo Mansour Hadi.

According to UN diplomats, Houthis had refused to pull back from the ports because they were worried that the Saudi-led coalition would move in to seize the facilities.

The Saudi-led coalition claimed the rebels are using the ports to smuggle weapons, while the rebels say they would be starved of vital supplies if the coalition held control over them.

The port of Hodeida is one of Yemen's most important lifelines. More than 10 million people are dependent on World Food Programme supplies that enter the country there.

Seven Saudi soldiers are to receive officer's training from the German military starting in July. But some lawmakers have accused the German government of turning a blind eye to Saudi's brutal campaign in Yemen. (29.04.2019)

President Donald Trump rejected a bill from Congress to end assistance to Saudi Arabia for the Yemen war. House Speaker Nancy Pelosi said the veto would serve to "perpetuate America's shameful involvement" in the crisis. (17.04.2019)