Outrage at violation of German arms export rules in Yemen war | Germany | News and in-depth reporting from Berlin and beyond | DW | 27.02.2019

Opposition lawmakers and activists have expressed outrage, but little surprise, at revelations that German weapons are being used in Yemen. However, the German government insists it has no evidence that this is the case.

The apparent violation of Germany's arms export control regulations by Saudi Arabia and the United Arab Emirates, revealed by DW and other news outlets on Tuesday, has drawn angry reactions from opposition politicians and anti-arms trade activists.

DW, together with German public broadcaster Bayerischer Rundfunk, Stern magazine, and investigative networks Lighthouse Reports and Bellingcat, gathered evidence that German weapons and weapons parts were being used in Yemen by the Saudi-led military alliance.

Germany's arms export guidelines are supposed to forbid the export of weapons into conflict zones and countries where human rights are being abused. Germany also imposed a temporary ban on arms sales to Saudi Arabia last year in reaction to the murder of journalist Jamal Khashoggi.

At its regular press conference on Wednesday, the government stuck to the same line as before the revelations emerged: insisting that it had no information about violations of the end-user certificates — the documents agreed by buyers meant to regulate where weapons are used and ensure they are not passed on to other countries. 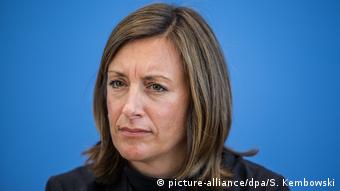 Ulrike Demmer, spokeswoman for Chancellor Angela Merkel, refused to comment on the new reports, and would only repeat the government's arms export control policy, which is that each sale is assessed on an individual basis.

"And of course considering human rights carries a particularly big weight," Demmer said. "The government takes seriously concrete evidence of violations of end-user certificates and pursues them," she added, while stopping short of saying that an investigation would be carried out now.

Annika Einhorn, spokeswoman for the Economic Affairs Ministry, added that no post-shipment checks had been carried out in Saudi Arabia to determine where the weapons were used.

Omid Nouripour, foreign policy spokesman for Germany's Green party, said the evidence proved that "all the previous insistence from the government that German weapons are not being used in Yemen are now trash. The government must now finally admit to the German public that it has not been straight with them, or else has lost control over what it is doing there."

"The government must end its strategic partnership with Saudi Arabia once and for all," he told DW.

The revelations did not come as a particular surprise to Andrew Smith, spokesman for the UK-based Campaign Against Arms Trade. "The German government does have a long history of arming human-rights-abusing regimes around the world," he told DW. "This war couldn't happen without the fighter jets which are flying over Yemen right now."

Otfried Nassauer, director of the Berlin Information Center for Transatlantic Security, who contributed to some of the new research, said that one of its key insights was the evidence that mercenaries in Yemen were using German weapons: itself a clear violation of end-user agreements.

According to the government, these end-user agreements, drawn up in negotiations between the arms companies and the buyers, are legally binding. Some lawyers, on the other hand, doubt this, and suggest that they are not part of the export licenses at all.

How to plug the gaps

"But I know of no case in which this rule has been applied," he said.

In the wake of Tuesday's revelations, many opposition politicians have repeated their calls for a specific arms export law, but as Nassauer explains, it needs to be very specific to have an effect. "It would have to follow the principle of the war weapons control law, and ban all arms exports except when they're permitted for certain exceptions," he said.

The result would not only mean a shift in the burden of proof, it would also force more transparency onto the process. "If someone wants to earn money with arms exports, they should have to explain why they should be allowed," said Nassauer. "This would be a major step forward."

Five H&K employees who conspired in a sale of G36 assault rifles to Mexico await their sentences in Stuttgart. The trial has offered insights into the weakness of Germany's arms export control laws. (20.02.2019)

Heckler & Koch fine 'should be used as compensation for murdered Mexicans'

A Mexican government spokesman has told DW that he feels a fine handed to German weapons-maker Heckler & Koch for illegal arms sales should be used to compensate victims' families. (22.02.2019)