Heckler & Koch fine 'should be used as compensation for murdered Mexicans'

A Mexican government spokesman has told DW that he feels a fine handed to German weapons-maker Heckler & Koch for illegal arms sales should be used to compensate victims' families. 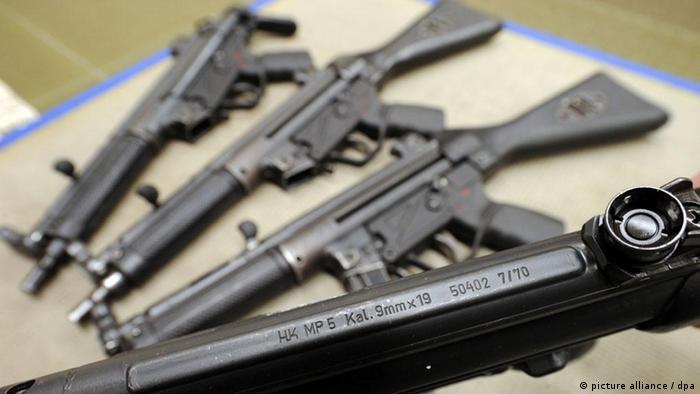 A fine imposed on Thursday on Germany's biggest gunmaker, Heckler & Koch, over illegal arms sales should be used to compensate the families of 43 students from Ayotzinapa, Mexico, who were murdered in 2014, a Mexican government spokesman has told DW.

The spokesman, Jesus Ramirez, gave what he stressed was his personal opinion after DW Director General Peter Limbourg had discussed the affair with Mexican Foreign Minister Jose Antonio Meade in Mexico City.

Heckler & Koch was fined some €3.7 million ($4.2 million) for illegally exporting arms to the Mexican state of Guerrero, where they are thought to have been used in the murder of the students.

The announcement of Thursday's verdict at a court in Stuttgart was met with some disappointment by arms trade opponents, as former CEOs of the company were acquitted for their involvement in the sales of the G36 assault rifles between 2006 and 2009.

Two former employees with administrative duties were given suspended sentences.

The trial in Stuttgart ran for 10 months.

On September 26, 2014, 43 male students studying at the Ayotzinapa Rural Teacher's College were kidnapped and disappeared. Mexican officials have said the students were handed by corrupt local police to members of a drug cartel in Guerrero, who then killed them, but this account is questioned by independent experts.

German and Mexican researchers have concluded that at least some of the students were probably killed by Heckler & Koch guns that had been exported to Mexico despite those responsible at the company knowing the weapons would be used in four violence-ridden Mexican states, including Guerrero.