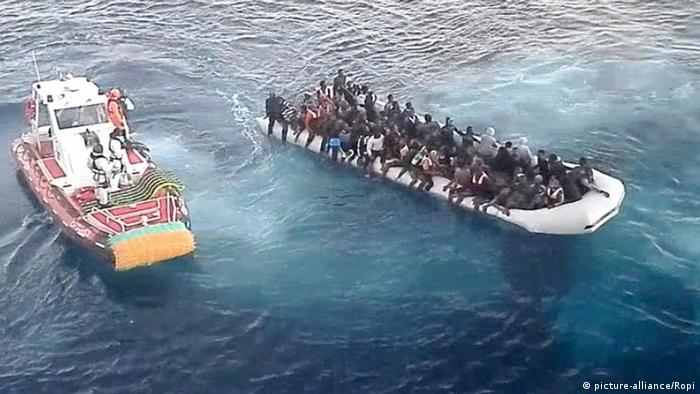 DW: Mr. Bozkurt, your party colleague and Social Democrats (SPD) boss Thomas Oppermann wants refugees who are pulled out of the Mediterranean returned to North Africa as a way of stopping trafficking. What is wrong with this plan?

Aziz Bozkurt: This is, at the very least, legally questionable. It is a fundamental principal of international law not to send back those whose lives and freedom are in danger. Under international law, you can't pull people out of the Mediterranean and then return them to unstable countries. What Oppermann is suggesting is neither realistic nor doable, same as other Social Democrats have said. It has been suggested before and, like spoiled milk, the idea does not get better with time.

Oppermann said that refugees should receive "initial care in North Africa." That sounds like asylum requests can be reviewed there.

It is fine to find legal paths. However, we have to see which countries we're dealing with. Libya, for example, is more than unstable, as Foreign Minister [Sigmar] Gabriel said again today. Then there are countries like Morocco or Tunisia. Conditions there are basic, yet even there we cannot guarantee legal procedures will be carried out to our standards.

Interior Minister Thomas de Maiziere plans to establish a reception center in Tunisia. What is wrong with checking asylum cases there? It's that those people are in large part already in European waters, making Europe responsible for the secure and legal handling of asylum procedures. This is also an attempt to push these people out of sight - out of sight, out of mind. That is unacceptable. Asylum cases should be processed here, when the situation calls for it. We cannot avoid the problem.

Is closer cooperation with North African countries for you the wrong way to better control the flow of refugees?

Of course. We have to work with countries that are safe. It is not our intention that people take dangerous routes and cross the Mediterranean. Thousands died that way last year.

What can the German government do to give people less incentive to take that risk?

Thomas Oppermann already made some good suggestions - increased foreign aid, for example. Germany gives 0.5 percent of GDP to foreign aid. It will be 0.7 percent soon, and that is already something. Development aid is especially important when you consider how the movement of refugees has been stoked the last few years, for example due to reduced aid to refugee camps in Lebanon. That was also European policy. We have to find legal paths, too. Oppermann has already made immigration policy a talking point, such as migrant work. Elsewhere, there is our cooperation with UNHCR, which opens up the possibility for legal paths for refugees.

Is Oppermann's statement, which sounds more like a CDU position than an SPD one, testing the election campaign waters? Domestic security will presumably be an overriding topic.

I don't really believe that. Oppermann's comments certainly were not approved, rejected by (SPD chancellor candidate) Martin Schulz's circle, and met with resistance throughout the party. Seeing that this was a one-off comment, I hope it was not an attempt at rebranding on the part of Oppermann at the expense of the SPD, as someone ready to become interior minister in the image of Otto Schily (who served in the position under Gerhard Schröder from 1998-2005 and was known for his hard-line, law-and-order stance). To reiterate: It was an isolated opinion and not the consensus of the SPD.

Aziz Bozkurt is the chairman of the SPD working group on migration and diversity. The interview was conducted by Volker Wagener.

The Left and Green parties have blasted a plan to return migrants to Libya. The criticism comes as EU foreign ministers meet to discuss the scheme in Brussels. (06.02.2017)