Insects perish at the frontlines of humans′ war with nature | Environment | All topics from climate change to conservation | DW | 21.06.2018

Surveys in Europe and North America show a dramatic decline in the number of bugs buzzing around. Although global data are missing, many researchers are convinced this environmental disaster is happening worldwide. 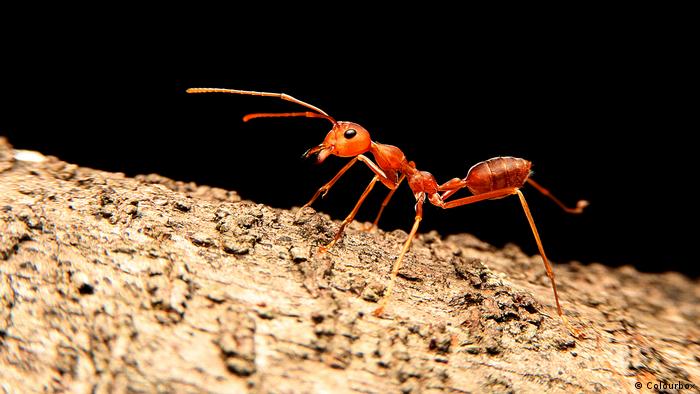 Insects can sting, bite and carry diseases. Some of us would be happy if there weren't any mosquitoes, horseflies and cockroaches left to bother us.

But what about butterflies and bumblebees? Wouldn't we miss them if they were gone?

Conservationists have been voicing their concern that all insects — including those that we love so much — are slipping away.

"In the summer, there were hundreds of butterflies, especially monarch butterflies, where I grew up," Scott Black, executive director of the Xerces Society for Invertebrate Conservation in Portland, Oregon, tells DW. "Now, you're lucky to find a dozen."

Studies by Xerces Society and the scientific network NatureServe confirm that the population of the monarch butterfly has fallen on average about 80 percent across North America from the mid-1990s to 2015.

Black also points to the "windshield phenomenon": you don't have to clean your car's windshield as often as you did in the past — there aren't as many smashed insects to scrape off.

Black, like other conservationists, believes this is an indication of a global insect die-off: "You just don't see those insects anymore."

"And I believe this is happening around the world." 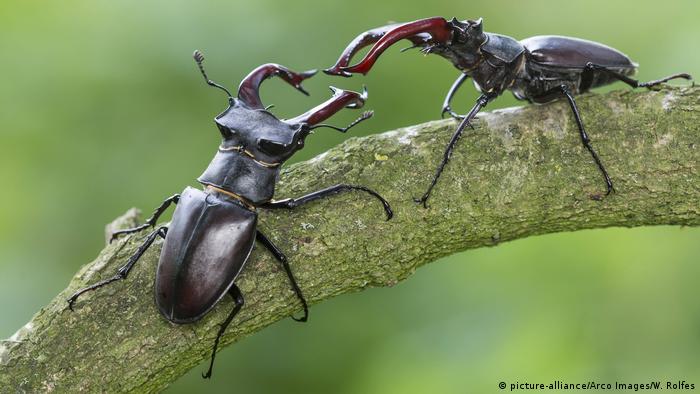 Insects are closely connected to plants, water and soils — which is why they suffer the most from intensive agriculture

A tough nut to crack

For scientists, personal observations like the effort put into windshield cleanup don't cut it as proof that the overall number of insects is indeed declining.

Kees Booij, an ecologist at the University of Wageningen in the Netherlands, even suggests that the notion of a worldwide insect die-off is simply based on "rumors and claims which are not supported by publications."

"Things are certainly not going very well for some insect groups in the agricultural and urban area — but fortunately in many places, many insect species are doing well. The drama is possibly a bit smaller than what the media reports suggest."

As far as scientific data go, it's indeed hard to pin down.

Actual long-term scientific data on the abundance of insects are scarce – simply because no one was interested in this question decades ago.

Luckily, there are exceptions.

Some troubling long-term studies in industrialized countries hint that an environmental disaster could be looming.

One study from the Krefeld Entomological Society in northwest Germany has become particularly well-known: a dedicated group of mostly amateur entomologists tracked insect abundance in a nature reserve near Krefeld since the 1980s by continuously trapping flying insects and weighing their catch.

Over 24 years, between 1989 and 2013, the trapped insect biomass had plummeted by 78 percent. This could mean two things: either larger insects are becoming less frequent — or there is a decrease in insects in general.

Researchers in the Netherlands had conducted a similar experiment, and came up with nearly the same result.

They caught ladybugs, ground beetles, mayflies, moths and others in two nature reserves in the Netherlands, and found an average population decline of 3 to 13 percent each year depending on the species. Only the number of true bugs hadn't dropped.

Researchers like Booij criticize that the studies in Germany and the Netherlands are "less robust than it is said," meaning he believes that the data are not precise and trustworthy enough.

Yet Josef Settele, an insect conservation and evolutionary biologist at Helmholtz Centre for Environmental Research in Halle, Germany, says that "it doesn't matter if the real decline is 80 or 60 percent — even 40 percent is simply too much."

While long-term studies on the overall number of insects in industrialized nations are already hard to find, they are almost nonexistent in developing countries in South America, Africa and Asia.

"Insect monitoring in those regions is still in their infancy," Josef Settele says. "Researchers over there have just begun to collect data."

Even the Food and Agriculture Organization of the United Nations doesn't have any global data on overall insect abundance.

What researchers have done in many countries across the world, however, is to monitor certain iconic or agriculturally important species.

And they have found that ever more insect species are declining, or even facing extinction.

This phenomenon can be observed across the globe, Josef Settele says.

"In tropical regions it's even more prevalent than in developed countries, due to deforestation and habitat loss."

Insect species on the brink of extinction

According to the International Union for Conservation of Nature (IUCN), populations for one-third of all insect species are declining.

The list of studies showing that insects are in danger is long. And it's not confined to Europe and North America.

Environmental researchers looked at butterfly fauna in a hill site in South Korea and found that the number of butterfly species had dropped 13 percent between 1999 and 2015, while the number of individuals across all species had plummeted by 70 percent.

"In addition to butterflies, large moths are also decreasing," lead author Sei Woong Choi tells DW. "I think this decease of fauna, known as defaunation, is now the common feature across the world."

His results are comparable to what researchers observed in the Central Valley of California during a 35-year survey showing that butterflies are declining on all study sites, both in species richness and in population.

This decline is even hitting insect species that are important food sources for humans.

In Mexico, researchers identified 14 species of edible insects under threat in the state of Hidalgo, Mexico, such as the red agave worm, a caterpillar.

In Benin, Africa, the International Institute for Tropical Agriculture has put together a red list of 34 endangered insect species. It includes the African Goliath beetle, an important protein source for people in central Africa.

A looming disaster for Africa?

Many insect species are crucial plant pollinators — if they go, they leave a gap behind that could possibly threaten human food security.

On the other hand, however, mosquitoes transmit malaria and other deadly diseases. Other insects such as locusts are agricultural pests that can even cause famines.

Especially in Africa, many insects are still seen as a danger for mankind, Michael Lattorff of the International Centre of Insect Physiology and Ecology (Icipe) in Kenya tells DW.

"Many small farmers simply don't know that some insects such as bees are useful."

Yet researchers haven't seen any decline in honeybee populations in African countries so far, Lattorff adds.

While honeybee colonies in Europe and North America are collapsing — due among other things to insecticides like neonicotinoids and parasitic Varroa mites harming the bees — honeybees in Africa are just fine. 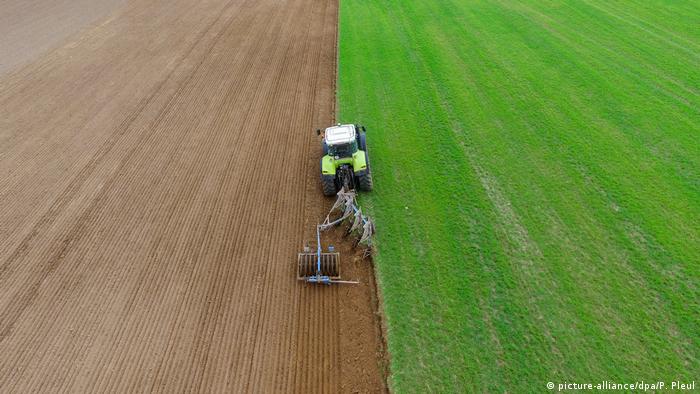 Researchers found in 2014 that bees in Kenya stay healthy even though Varroa mites were present throughout the country, suggesting that the bees are more resistant.

But Lattorff cautions that insecticides are being used widely in African countries nowadays, and that often no regulations on pesticide use exist.

A survey back in 2013 showed that farmers in various parts Kenya do not follow pesticide usage advice — like avoiding application in the morning, when pollinators are active.

"We know very well which factors are impacting bees in developed countries," Lattorff says. And we might cautiously predict that bees — and maybe insects in general — will suffer the same fate over here if nothing is done to prevent it."

Dave Goulson, professor of biology at the University of Sussex in the UK, points out that other parts of the world are already starting to see the impacts of the loss of pollinators.

"Probably the best known example is in China where in parts of China they now hand-pollinate their apple and pear trees because they don't have enough bees left to do it." 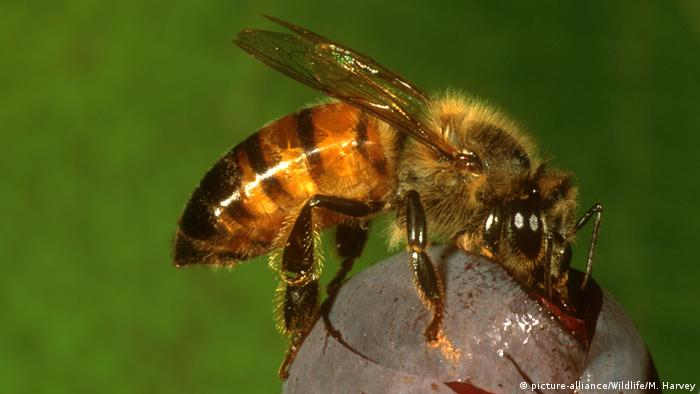 Not too late to act

Pesticides, monoculture, habitat loss and climate change are possible threats for insects, in industrialized as well as developing regions.

Not all insect species are declining, though — just as Booij pointed out.

Butterfly monitoring in Germany conducted by the Helmholtz Centre for Environmental Research in Leipzig found that the peacock butterfly is doing quite well, despite intensive agriculture.

These animals lay their eggs on the undersides of leaves of the stinging nettle — a plant that grows very well in nitrogen-rich, over-fertilized areas.

To conserve the richness in insect biodiversity, though, conservationists and researchers agree that it is time for a global change in agricultural practices, which would include using insecticides only in emergencies — such as to prevent a famine.

And you don't need to be a farmer to help the creepy crawlies survive.

"The neat thing about insects — unlike wolves, or polar bears, or Bengal tigers — is that insects are all around us. What we do in our everyday lives can really make a difference," Scott Black says.

Planting flowers in your garden and on your balcony will give those animals habitat — and the possibility to thrive.

"I believe there is still time to do something — if we take action now."

Paper cups are killing India's honeybees, two studies show. The important pollinators are attracted to the sugary residue left behind by beverages. Small changes could make a big difference in saving India's bees. (20.06.2018)

They're found almost everywhere on earth, are eaten in some cultures and pitted against each other for sport in others. Some can even blast enemies with explosive chemicals. Welcome to the fascinating world of beetles. (05.04.2018)

Fewer butterflies are flitting from flower to flower in the UK and North America, say two new studies. Pesticides, disappearing green areas and air pollution are some of the culprits. (23.02.2017)

The UN's first ever report on biodiversity warns that bees, butterflies and other pollinators are at risk of extinction. Such a development would threaten human food supplies and cost hundreds of billions of dollars. (26.02.2016)

The beloved orange-and-black insect is a step closer to extinction due to climate change and habitat destruction, a conservationist group said. Meanwhile, tigers are doing better than expected.

Farmers and green groups have held a tractor protest in Berlin to demonstrate against industrial farming practices. The agricultural activists are worried about the impact of cheap meat on animals and workers, and insect die-off from pesticides.