As a trans woman, Hendrika Kelan overcame social barriers in conservative Indonesia to win the support of her community. Active in the Catholic Church, Kelan says she has always tried to serve others. 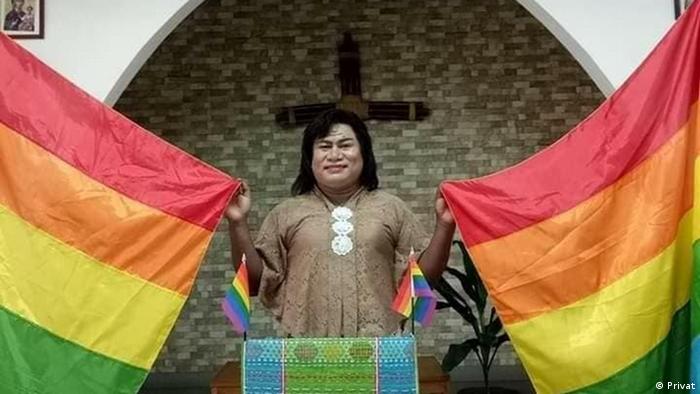 As the head of the consultative body of a small village in Indonesia, Hendrika Mayora Kelan celebrated her 34th birthday last week by giving out vegetables to her community.

Kelan is the first openly trans woman to become a public official in Indonesia, the world's largest Muslim-majority country.

"I am grateful for the support of the people to me as a trans woman. They entrusted the leadership of the village council to me," Kelan told DW.

She said at times during the election, she felt inferior because of her sexual orientation. But it seems her reputation as a hard worker mattered more to the village.

"As soon as I was elected, I was immediately confronted with the hardships brought on by the pandemic. So, I immediately created a food security program, planted crops and distributed them to the community," said Kelan.

The Habi Village Consultative Body has important functions, including drawing up village regulations, overseeing the use of village funds and monitoring the performance of village officials.

With the authority she has for the next six years, Kelan will also try to enact inclusive policies, including empowering marginalized groups such as transgender people.

Habi village in Sikka district is part of a Catholic-majority region in Indonesia's southernmost province, East Nusa Tenggara. There are around 320,000 people in Sikka, of which Muslims make up 9%.

Before transitioning to a woman, Kelan had been a religious brother in the Catholic Church. As a devout Catholic, she has contended with a struggle between her sexual identity and her faith. 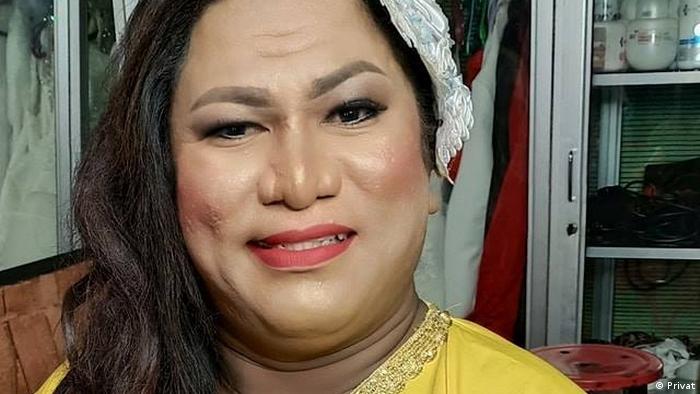 Born in August 1986, she was given the male name Henderikus. She said she had felt like a girl since elementary school; wearing make-up and playing with girl's toys.

"I already felt different from boys. But due to family pressure, I continued to survive as a boy."

When she was a child, her family moved to the larger island of Papua and in high school, Kelan entered a Catholic seminary school and became a religious brother.

"I had the spirit to serve others," she said.

But during that time, she also struggled with accepting her identity and reconciling her faith with the feeling that being transgender was a sin prohibited by her religion.

Meanwhile, the feeling that she was a woman trapped in a male body grew stronger, and she began battling depression.

"I did not tell my bosses about my self-identity, but I think all people could see my femininity," she said.

After two years, she decided to leave the service of the church. Slowly she started coming out as transgender and began wearing women's clothes.

She moved to the city of Yogyakarta on Java. She volunteered to help victims of HIV-AIDS, but she soon ran out of money. She worked as a street performer and a sex worker, facing beatings and harassment from officials.

In 2018, following the death of her cousin, Kelan decided to leave the city and return to the village in Sikka where she was born.

Winning acceptance, and an election

It was a hard process to win acceptance from the people in Habi village, but Kelan managed to overcome negative attitudes towards her lifestyle though community activism together with a local transgender group called "Fajar Sikka."

"If there are activities or events in the village, I will persuade my friends who are trans women to get involved, arrange decorations, arrange events, or cook. Their cooking is delicious and enjoyed by the community," she said.

People in the area began to notice that Kelan was serious about helping her community. Housewives especially appreciated Kelan's assistance, and their support propelled her into candidacy for the village council.

"The people who nominated me know that I am a trans woman. I also said that if I was elected to help the community, I would be willing, but without changing my identity," Kelan said.

Kelan said the support of Fajar Sikka has been instrumental to her success as a public official.

Fajar Sikka was established in 2018 in Sikka district to help people who feel ostracized by the community, whether it is because of different sexual orientation or disabilities.

With over 40 members, Fajar Sikka gives transgender people, indigenous women and workers with disabilities a place to belong.

"I know what it's like to be depressed and scared. I used to be afraid and stressed. Like me, those sexual minorities have always felt guilty, despised. I slowly convinced them to accept themselves first," said Kelan.

For transgender people in Indonesia, being able to live peacefully without facing judgment and discrimination is already a major challenge.

Kelan encourages Fajar Sikka members to learn new skills and avoid being trapped by stereotypes that trans women can only work in salons, as street performers, or become sex workers.

As village council leader, Kelan's salary amounts to only €64 ($75.3) a month. She is also often invited to be a speaker in webinars and can earn extra money from that.

Kelan said she wants to help her village develop, but she also wants to be an example that trans women in Indonesia can be part of government without stigmas and stereotypes attached.

However, she admits, she has no ambition to build a career in politics. "I will become whatever I need to be, whether a member of parliament or a regent, as long as it allows me to do what I aspire to do: serve people and help the community. Or I might become a nun."

Religious conservatives in Indonesia have managed to increase their influence over the past couple of years, when someone who is considered to be liberal and a modernizer - Joko Widodo - has been in office as president.