Indonesia′s Aceh enlists an all-female flogging squad to enforce Shariah law | Asia| An in-depth look at news from across the continent | DW | 03.02.2020 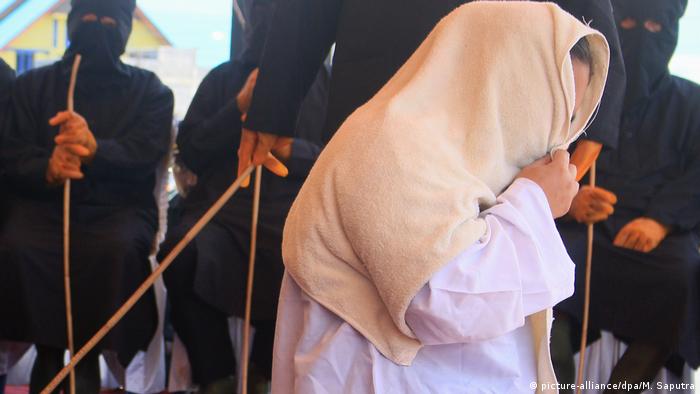 A common punishment for these offenses is public flogging, which involves beating someone with a whip or a stick. Indonesia's President Joko Widodo, along with human rights activists, have called for the public floggings in Aceh to stop. But authorities in the province insist the practice deters crime.

Shariah police in Banda Aceh, the province's largest city, patrol the streets to monitor offenses. Aech follows Shariah under a 2005 autonomy deal with the central government. Indonesia is the world's largest Muslim-majority nation, but the majority of the country is secular.

The job of carrying out the punishment has always been done by men, but as more women are charged with morality crimes, Islamic law calls for women to whip female offenders.

Aceh province has now recruited eight women who agreed to be female floggers. According to the AFP news agency, Aceh officials said all of them were trained in proper technique and instructed on how to limit injury in carrying out beatings. The women wear cloth masks and loose fitting brown uniforms to hide their identities. 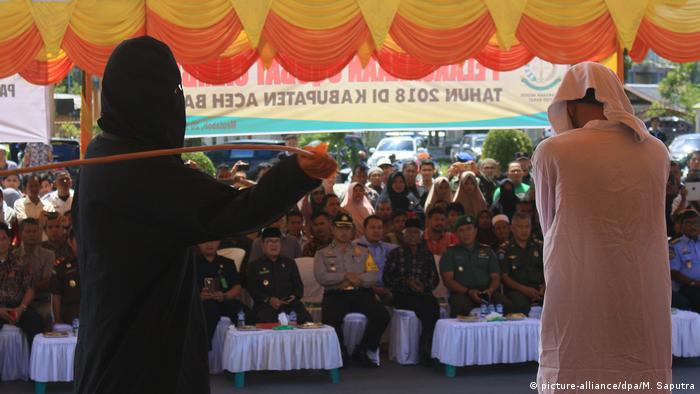 "The sickening spectacle is a shameful act and a public display of cruelty. No one deserves to face this inhumanity, both the victim and the executor. It is degrading and amounts to torture."

According to Hamid, the authorities in Aceh and Indonesia must immediately change the legal footing that allows for Shariah, and bring the law in Aceh in line with both international standards and Indonesia's human rights obligations under its own constitution.

Read more: Southeast Asia in the crosshairs of 'Islamic State'

Misiyah, an Indonesian women's rights activist who goes by one name, said that women already face oppression under the Shariah system, and the flogging squad breaks down their solidarity.

"Women need to be united to strengthen and empower each other. In this case, women are positioned to commit violence against other women," she told DW.

Misiyah, who directs the women's rights organization KAPAL Perempuan, added that Shariah law does little to protect women who are victims of abuse and rape.

Indonesian feminist, Atnike Sigiro said that women tend to be a vulnerable group when dealing with the legal system. 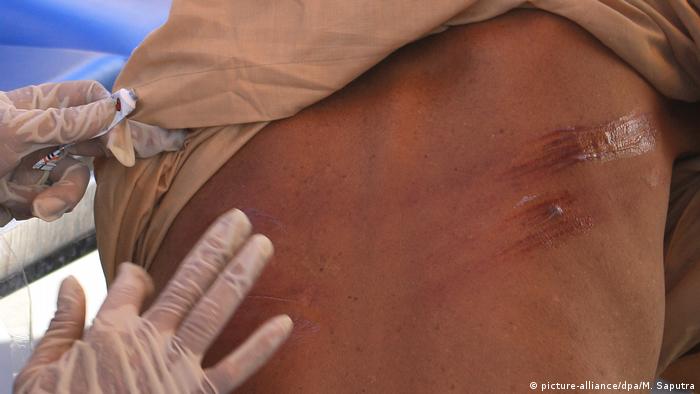 Flogging punishments are handed out in Aceh for 'moral' offenses like gambling, drinking or adultery

"Making women carry out another woman's flogging sentence does not make the sentence more ethical," she said.

"Aceh, which received special autonomy, has experienced a setback in respecting and protecting human rights and violence against women."

Shariah as a political tool

Sumanto al Qurtuby, a cultural anthropologist and professor at King Fahd University in Saudi Arabia, said that Shariah law is used as a political tool to exert power over vulnerable people — both men and women.

Shariah is generally applied to civilians and petty offenders, but does not touch oligarchs and political elites. Qurtuby underlines that the lawmakers and those who approve or ratify Shariah law are not limited to Islamist parties or elites.

"In Indonesia, Shariah law is a political commodity used by political elites to please Islamic organizations and groups," said al Qurtuby. "The regulations are also approved by non-Islamist political parties to get voters."

Indonesian Islamists rally in Jakarta in a show of force

Hardline Muslim groups held the rally to mark the second anniversary of demonstrations that forced Jakarta's Christian ex-governor to step down. An Islamist-linked politician is now seeking to become president. (02.12.2018)