Indian weavers turn to old tech to protect the environment

India's cotton industry is polluting rivers and the environment, and workers are often underpaid. But traditional handlooms, chilli and natural dyes could make a difference. 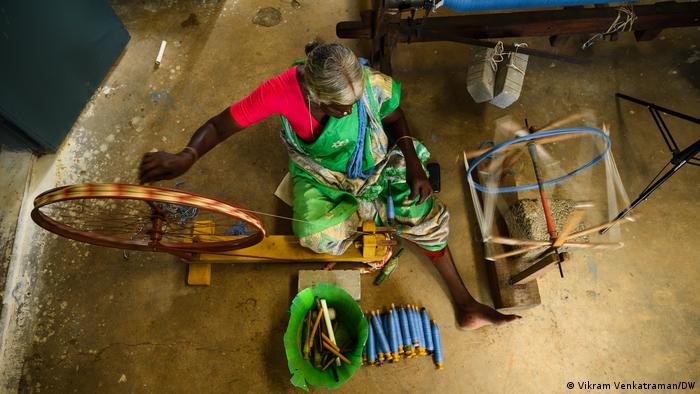 In Chithode village, in Tamil Nadu, the air is filled with the song of myna birds and the click-clack of handlooms. Two women in saris use charkas (wheels) to adjust the tension of the yarn, which is then wound into a small bobbin. Seven men work wooden shuttles, pressing foot pedals in sync with the throw of the weft across the warp yarns.

Among them, 23-year-old Thamaraikannan weaves sky blue yarn with expert precision. "I come from a family of weavers in Erode, so I grew up around yarns and looms," he said.

Like most homes in the area, his family has a tharikuzhi, or pit loom, set into the floor, where they weave silk saris. But the pandemic has been bad for business so — Thamaraikannan has come to work the cotton here at Oshadi, a sustainable "seed to closet" initiative in Erode, a textile hub in South India. 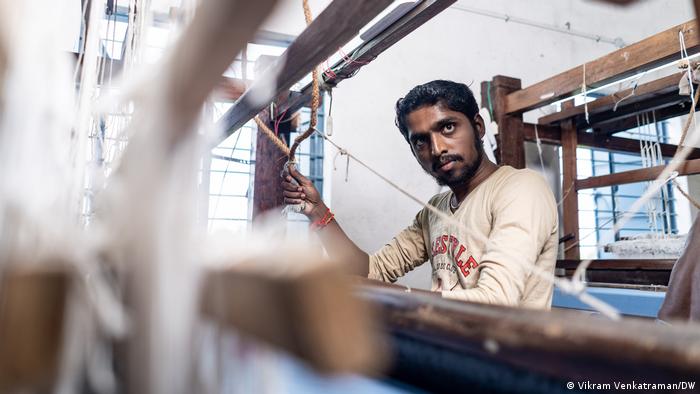 He's not alone. Thamaraikannan says there has been a mass exodus from cottage industry operations to Erode's commercial textile mills and tanneries. Home weavers, who are mostly older women, just aren't earning enough to get by.

Nishanth Chopra, the 26-year-old entrepreneur behind Oshadi, grew up in Erode, "around textiles, leather and spices." When he started his women's wear brand in 2016, he began to question how the industry treated both its artisans and the environment.

Not only are Indian textile workers frequently underpaid, but cotton farming in India consumes huge volumes of water, and fields given over to monoculture leach nutrients from the soil. Chemical dyes, meanwhile, pollute rivers and groundwater. Moreover, in India, though only 5% of cultivable land is under cotton, the segment makes up 55% of the country's expenditure on agricultural pesticides.

So, Chopra began to re-examine the entire value chain, one step at a time.

Initially, he worked with a cooperative of handloom weavers, but discovered that less than half of what he paid for the fabric was going to the weavers.

"I had to find other ways to pay the weavers a fair wage," he said. So, he began working with the weavers directly and supported exceptional artisans by investing in their looms. The next step was getting his dyers to switch to natural dyes, which he sourced and provided to dyers himself, with a guarantee that he would buy back the yarn at a premium price.

Working back to the source of the cotton itself, Oshadi helps farms to move away from monocropping and to regenerative, organic farming, which Chopra says is simply a return to how farming was done traditionally in India.

One of his partner farms is at Kaanchi Kovil, not far from where the cotton it produces will be woven in Erode. Green grams and urad dal are planted between cotton plants to enrich the soil. Castor, meanwhile, is planted at the borders. "We use these as a pest warning system," farm supervisor Sivashankar explains. "Usually, the cotton pests attack the castor leaves first. It indicates that it's time for our organic pesticides."

Tamil Selvi, an experienced farmer who is receiving training from Oshadi to switch to organic methods, says a "3G" formula of ginger, garlic and green chilli extracts keeps off the mealy bugs and other pests, while intercropping with spicy or bitter crops like neem, erukku (crown flower in English) or adhatoda deters livestock from grazing where they shouldn't.

"For 20 years, I have been doing conventional cotton farming and have tried to switch to organic without much success," Selvi said. "But now, I have been able to understand how to work with the soil."

On the 'khadi trail'

Ananthoo is an entrepreneur who had been in the organic food business in South India for some time when the alarming suicide rate among cotton farmers motivated him to set up an organic cotton clothing brand Tula in 2014.

First, though, he hit the road to find out more about the industry. "We did not know what to do with cotton and so the first step we did was to go on a 'khadi trail' across the country."

During India's independence struggle, leaders like Mahatma Gandhi promoted khadi — hand-spun, hand-woven Indian cloth — as an alternative to importing fabrics from British rulers and a means to economic self-reliance that would help unite Indian villages against colonial rule.

But even back in 1908, when Gandhi proposed khadi as a "panacea for the growing pauperism of India," he confessed to having a hard time finding artisans who knew how to use traditional handlooms and spinning wheels.

Working his way from town to town a century later, Ananthoo found that commercial mills had virtually put the handloom industry out of business, leaving artisans in poverty. "Everywhere we went, artisans were telling us that they were [among] the last in their family to pursue handloom," he said. "Instead of setting up our [own] units, we decided to work with these failing khadi institutions and give them a better pay."

Like Oshadi, Tula supports farmers to switch to organic native cotton, which Ananthoo says they have found more resilient to changing climatic conditions, surviving both droughts and unseasonal rains.

"We are now creating close to 100 livelihoods in our sustainable value chain, from seeds to fabric," Ananthoo said.

Of course, all this investment in artisans and sustainable production is costly. Ananthoo says that Tulas' fabrics cost nearly 10 times as much as those produced in standard mills. 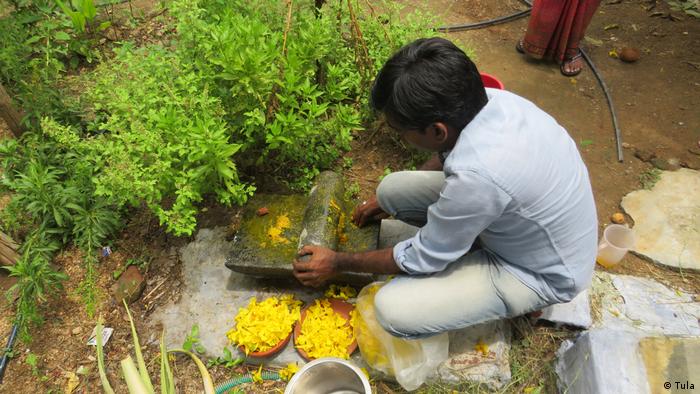 Oshadi's products are also expensive — finished items of clothing retail for at least 8,000 rupees ($110) — and its customer base is mainly abroad. Tula, though, will not export its products because of the carbon footprint involved.

Ananthoo says his aim is not to keep growing his own business but help set a trend for more small, decentralized operations. "Tula doesn't need to expand into a bigger conglomerate," he said. "We hope to inspire many small local movements — value chains across India that supports rural economy and is environmentally conscious."

Reviving tradition for the sake of rivers

C Sivagurunathan used to be an IT worker in Bengaluru. "My biggest desire was to buy a BMW car," he recalled. But reading an essay on virtual water — the hidden cost in water of commodities — reminded him of the dying Noyyal River that flowed through his village.

The Noyyal runs through Tiruppur, Erode and Karur districts, all of which have textile clusters that pump effluent containing toxic chemicals into the water. Sivagurunathan says he had watched the river froth with pollution and seen the farmlands it waters turn barren.

Coming from a family of weavers, he decided to set up a handloom weaving society, called Nurpu, to show how textiles can be produced without causing such harm. 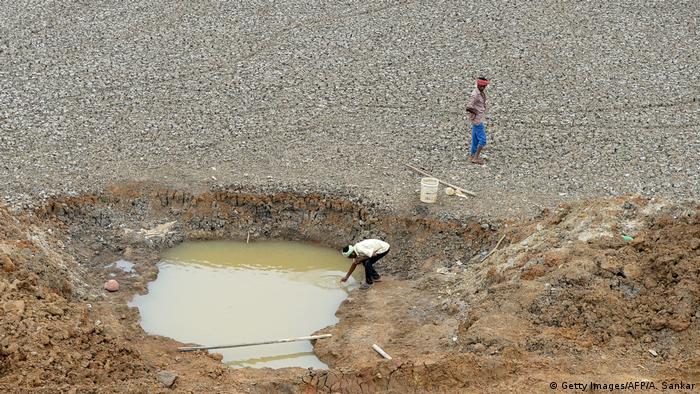 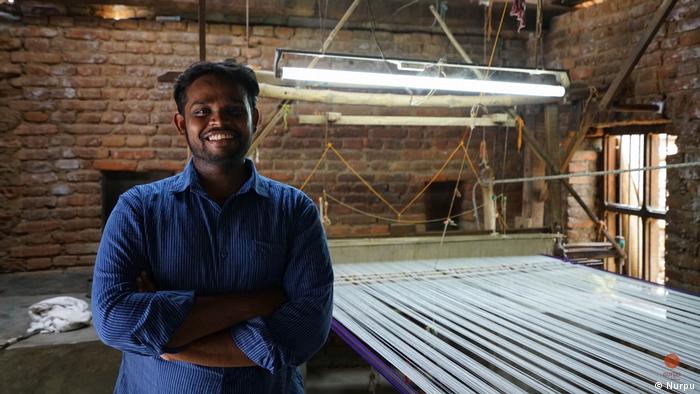 Sivagurunathan began by selling unbleached, undyed fabrics but these didn't do well. Now he's trying natural dyes on organic cotton and promoting the unbleached fabrics for items such as towels. Like Tula, Nurpu is focused on the Indian market, and sells at two different price points with the premium segment helping to pay craftsmen better.

One day, Sivagurunathan would like to fund a working museum, "where a child can see how the seed becomes the cloth."

And he no longer yearns for that gas-guzzling BMW. With climate change already putting Indian farmers under pressure, he believes reviving pre-industrial technologies is the way forward.

"I believe that handloom is the future tech as it depends on only human energy."

The storming of the Red Fort in Delhi marked a dramatic escalation to months of protest to new farm laws. Could a more sustainable form of agriculture be part of the solution?