India: Children grapple with the aftermath of farmer suicides | Asia | An in-depth look at news from across the continent | DW | 12.11.2019

India: Children grapple with the aftermath of farmer suicides

A lack of transparency on farmer suicide data and meager and irregular welfare payments is forcing Indian children out of school, advocates say. Nearly 60,000 farmer suicides have been linked to climate change. 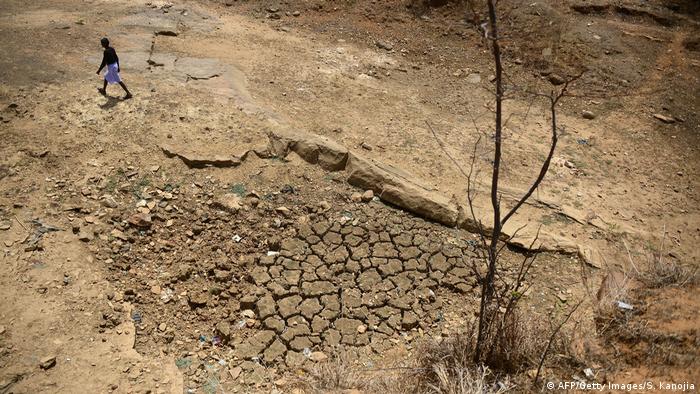 Growing up, 19-year-old Renu Wankhade's parents made her believe that education was the only way out of her farming family's dire situation in an agrarian country like India. But it turns out this was not true.

In June 2016, her father Devrao, having lost any hope of repaying the €650 ($716) debt that he had incurred after years of failed crops, drank pesticide and killed himself.

For almost three years, Renu held on to her father's belief and kept studying. But this year, she gave up on her Bachelor of Arts course, unable to pay the annual fee of €45 that covered her education and transport.

"I have always wanted to study further. But now, it is a question of survival. My mother needed me on the farm for us to earn enough to eat," Renu said.

In the arid region of Vidarbha in the western Indian state of Maharaashtra, Renu's tale is a common one. More than 250,000 farmers in India committed suicide between 1997 and 2012.

Since 2016, the Modi government has unofficially blocked the release of official data on the number of farmers committing suicide in India, but in July, 2018, the Indian government told the lower house of parliament that 11,370 farmers had committed suicide in India in 2016 and 3661 of these deaths were in Maharaashtra.

Advocacy experts believe that the lack of authentic data is making it difficult for them to demand that the government do more for the victims.

Climate change driven changes in weather patterns — from excessive rainfall to frequent droughts — are leading farmers like Devrao to suffer huge crop losses and, as a result, heavy debt across farm households in the region.

In India, nearly 60,000 suicides are thought to have been linked to climate change, according to a 2017 study published in the journal PNAS.

But this agrarian crisis is fast acquiring a troubling social dimension. A lack of adequate state support, the vicious cycle of poverty and mounting debt due to farming losses have driven youngsters like Renu to give up their education to help their families. Dangerously, this is also driving instances of child labor, with more and more distressed families pushing children into the workforce, according to local activists.

'To survive, they have to push young children into the labor force'

Earlier this year, a report by Indian non-governmental organization Child Rights and You (CRY) estimated that 60.67% of working children in Maharashtra were employed in the agricultural sector, according to a report in The Hindu English-language newspaper.

Among the 40.34 million working children and adolescents in India, 25.23 million (62.5%) worked in the agricultural sector, The Hindu reported.

Rahul Bais, co-founder of Swarajya Mitra, an Amravati-based not-for-profit organization that focuses on female farmers and their families, believes there is a strong causal correlation between agrarian distress and child labor.

"Child labor becomes a compulsion in these circumstances. If families have to survive, they have to push young children into the labor force," Bais said.

Renu said that after her father's death, money was hard to come by. For one day's labor she earned just €1.30. Her mother Mangala was forced to borrow €650 from her extended family to marry off her older daughter in 2018. Ever since, her crops have failed for two consecutive years due to erratic rainfall, forcing her to make a hard choice.

"I was really keen for my daughters to study. But I am struggling to pay the loan back and hence, I had to tell Renu to come help me instead of studying," Mangala said.

Such a situation, Bais says, could have been avoided had the government ensured adequate educational support for families such as Renu's.

Recent research shows that existing provisions are not reaching the intended beneficiaries. Last year, an umbrella group of farmer organizations, MAKAAM (Forum for Women Farmers Rights) found that only 12% of the children had benefitted from the government's concessions on fees offered until the 12th year of schooling, while 24% had benefitted from subsidized stationery.

When assistance does exist, the government's welfare measures are often meager and irregular.

Buddhamala Javanje, 49, stopped relying on a monthly government pension of €7.50 for widows of farmers who have committed suicide. "It is so erratic— sometimes, we get it once in two months, at other times once in three months," she said at her home in Bandipohra village in Amravati district

Javanje's husband Ramrao hung himself from the ceiling of their mud-walled house 10 years ago after finding no way to pay his debt. He left behind Javanje and her two children — Akshay, then just 10, and Priyanka, who was 12. Javanje was so far away from the family's farm that she did not even know how much debt the family owed.

Widows often struggle to get their owed share of property rights. The family owned 2.5 acres of farmland, but soon after Ramrao's death, his father sold off the land, refusing Javanje her share. "Instead, he offered to fund my daughter's wedding," she said.

Her €1.30-a-day income as a farm laborer would barely suffice, so Javanje asked her daughter Priyanka to drop out after her 8th grade class, while her son continued studying. But Priyanka developed a mysterious illness — Javanje still doesn't what it was — and passed away after a few short months. The family lost a breadwinner and was saddled with a debt of €320 from her treatment. That's when Javanje decided that Akshay would need to drop out as well.

'I wanted to finish my education'

"I was doing decently well. I wanted to finish my education and go to a city so that I could get a good job," said Akshay. But with his education stunted, he is no longer able to get one of those jobs. Instead, he works on farms, which fetches him anywhere between €1.90—€2.50 a day.

Despite that, his family continues to be in a precarious state — he and his mother get work only twice a week or so. Jobs dry up each time there are heavy crop losses due to droughts or heavy rainfall. "If people don't make money on their crops, how will they hire us?" Javanje pointed out.

The head of Amravati district's local government, district collector Shailesh Nawal, said that the government was also looking at ways to improve the implementation of existing schemes. "We are setting up feedback mechanisms like a helpline, where families can call us and let us know if our schemes are not reaching them."

But for youngsters like Akshay and Renu, there is often no choice between earning enough to bring food to the family table and pursuing their education.