Bayer-Monsanto deal draws criticism in India | Asia| An in-depth look at news from across the continent | DW | 15.09.2016

German firm Bayer's acquisition of US seeds company Monsanto, if approved, would create the world's largest agribusiness. But the deal has drawn criticism in India and sparked concerns among the nation's farmers. 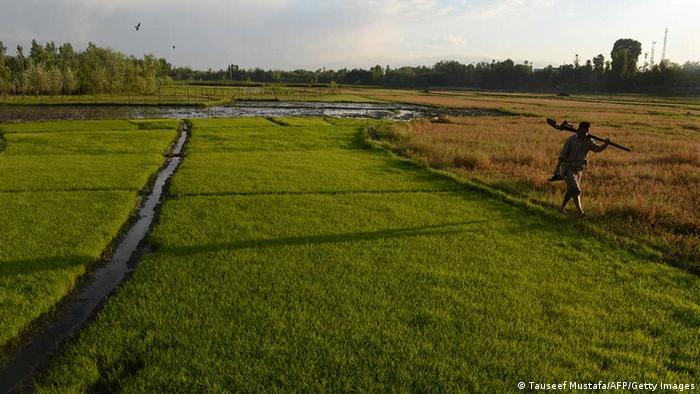 Following months of negotiations, Monsanto finally agreed to be bought by Bayer for a price tag of around $66 billion (59 billion euros), the German company said Wednesday. Still, the proposed takeover is expected to face stiff opposition and intense scrutiny not only in the US and Europe, but also in places like India, where the two companies have a significant presence.

The Indian arms of both companies are also listed on stock exchanges and their combined market value as of Wednesday amounted to some $2.83 billion.

While Bayer is a market leader in the crop protection business in India, Monsanto is well known for its genetically modified (GM) seeds and dominates the nation's GM cotton seed market. India is Monsanto's biggest market outside the Americas and the company's lab-altered Bt seeds account for over 90 percent of the cotton seeds sold in the South Asian nation.

But like in other countries across the world, Monsanto is a contentious entity even in India, with the firm embroiled in a number of controversies involving its seeds and business model.

Monsanto and the Indian farmer suicides

And its impending merger with Bayer has now triggered worries that it would reduce options for farmers even further, with many in the Indian farm sector expressing concerns at the ongoing consolidation in the industry and its potential adverse effect on Indian agriculture.

"It will lead to concentration of power and will result in market distraction. This is the third such merger of seed majors in recent times. This will leave only three players in the global market and will have a cascading impact on Indian agriculture," N. Prabhakara Rao, President of the National Seed Association of India, was quoted by the Hindu newspaper as saying.

"We know Bayer is into agrichemicals and pesticides but it has inherited all the problems of Monsanto in India. Shareholders of Bayer in Germany should be worried and I feel sorry for them," Ashish Gupta of the Organic Farming Association of India told DW.

"When resources are concentrated in a few hands, their bargaining power will go up and it will have an adverse impact on the interests of farmers in developing countries, like ours," says Ritu Singh, a member of the Coalition for a GM-Free India.

Likewise, environmental activists like Vandana Shiva and many others have taken to social media networks such as Twitter to lambast the Bayer-Monsanto deal.

But industry insiders dispel these fears.

"This is a complete consolidation of technology and distribution of seed technology in three continents. This will result in big market opportunities and access for farmers," said Bhagirith Choudhary of the International Service for the Acquisition of Agri-biotech Applications.

Bayer's takeover of Monsanto comes at a time when public resistance to genetically engineered crops has been spreading across India. This is a consequence of the growing number of reports about the negative impact of GM crops on human health and the environment.

Moreover, GM seeds are increasingly blamed by activists for causing financial hardship to farmers and driving them to commit suicides.

Critics also use hashtags on Twitter such as #MonsantoQuitIndia and #Cottonopolis to share information and for advocacy purposes.

Monsanto, however, denies these accusations, arguing on its website that "research also demonstrates there is no link between Indian farmer suicides and the planting of GMO cotton."

Nevertheless, it hasn't been smooth sailing for the company on the Indian market, with Monsanto recently withdrawing an application for its next-generation GM cotton seeds in India due to intellectual property concerns.

Bayer takes over Monsanto in mega-deal

German pharmaceutical giant Bayer have clinched a $66 billion (58.8 billion euro) takeover of US seed company Monsanto after months of talks with a sweetened offer that marks the largest all-cash deal on record. (14.09.2016)

The US seed and pesticide giant Monsanto has agreed to an improved takeover bid from the German pharmaceuticals manufacturer Bayer. The multi-billion-dollar deal will create the world's biggest crop seed producer. (14.09.2016)

That came after the US firm opposed an Indian government proposal that would force it to share its technology with local seed companies.

In fact, in a show of unity, major global seed companies, including Monsanto, Bayer, Dupont Pioneer, Syngenta and Dow, formed an alliance last month to jointly oppose the proposed measure.

An executive from Bayer India was quoted by the Reuters news agency as saying that nobody would invest in research if the proposed introduction of compulsory licensing - which would force a company to share its intellectual property if the government so orders - is implemented.

Another problem between Monsanto and the Indian government involves a cut in the royalty the company gets paid from local seed companies for using its patented technology. Prime Minister Narendra Modi's government imposed a cut of around 70 percent in royalties that local firms pay Monsanto for its cotton technology.

"It's now upon Monsanto to decide whether they want to accept this rate or not," argued junior Agriculture Minister Sanjeev Kumar Balyan.

"If they don't find it feasible, then they are free to take a call. The greed (of charging) a premium has to end. We're not scared if Monsanto leaves the country, because our team of scientists is working to develop (an) indigenous variety of (GM) seeds," he said.

The US company has taken the government to court over this issue.

India currently does not allow GM food crops, although some sections call for their introduction citing the need to boost farm productivity to meet the increasing demand in the world's second-most populous nation.

In 2010, India placed a moratorium on GM eggplant, fearing its effect on food safety and biodiversity. But last month, an official panel cleared commercial use of GM mustard, which would be India's first GM food crop. Still, the government has yet to approve it and the country's Environment Minister Anil Madhav Dave recently said New Delhi would soon make a decision on this issue.

Some argue that India spends an estimated $12 billion annually on vegetable oil imports, and that allowing GM mustard would be a way for the country to reduce this bill.