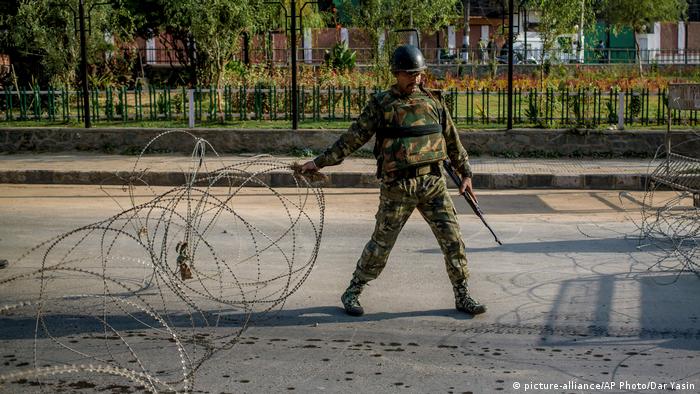 Rakesh Pandita, 55, was murdered hours after Indian security forces had killed the brother of a slain militant, Muhammad Amin Malik, 38, inside a police station in Tral.

Markets were shut as anger of the killing spread through the town. In the evening, a group of three suspected militants barged into a house, barely 500 meters away from the police station, and shot dead Pandita.

Asifa Mushtaq, 24, was also wounded in the attack.

Although BJP leaders have been killed in Kashmir after the party came to power in 2014, militant attacks on them have intensified since New Delhi abrogated the region's special constitutional status in August 2019.

So far, 17 BJP leaders have been killed in Kashmir since the revocation of the special status.

No protests against the killing

Pandita is the latest victim of a militant campaign targeting people who could normalize the abrogation of the region's limited autonomy. So far, 22 people have lost their lives due to the campaign.

Pandita had been living with his family in Jammu since the outbreak of anti-India militancy in Kashmir in the early 1990s.

During a widespread poll boycott in Kashmir in October 2018, he was one among several BJP candidates who won the municipal elections uncontested and returned to Tral.

He died in the town where he was born and spent his early years of youth with his Muslim friends.

Mushtaq told DW that she was horrified when some gunmen barged into their kitchen and fired indiscriminately.

"I felt dread and numbness in my right leg. I regained conscience after surgery in the hospital," she said.

"We are shell-shocked. Everyone in the family has turned numb," said his distraught brother Sushant Pandita, who has yet to come to terms with the politician's death.

"He never received any death threats before, but anti-India forces must have been upset with his developmental work in Tral," Sushant said.

He is disappointed that many people in Tral benefited from his brother's work, but no one protested his killing.

"A symbolic protest in Tral against his killing would have been a consolation," he said.

In the run-up to the abolition of Article 370, New Delhi detained several thousand Kashmiri leaders and politicians, including pro-India ones, to stave off mass protests.

That froze all political activities in the region, except those of the BJP.

The decision was seen by locals as one of New Delhi's many betrayals, and it brought people together cutting across the political divide. Furthermore, it triggered strong public resentment and militant attacks targeting BJP politicians.

"Only the BJP workers are being targeted in Kashmir because we are the only Indian nationalist voice here unlike other [pro-India] parties whose support vacillates among India, China and Pakistan," BJP spokesperson Altaf Thakur told DW.

Thakur added that BJP workers were engaged in developmental work at the grassroots level, which, he stressed, antagonizes Pakistan and militants in Kashmir.

"They want crisis in Kashmir, so that they can motivate youth to pick up guns against India. In peace, they fail to do so," he said.

Thakur's views were echoed by a senior police official, who said BJP leaders were being targeted by militants because "only they are active and vocal on the ground while the rest of pro-India politicians are maintaining tacit and tactical silence."

"Also, the BJP is seen as a Hindu chauvinist party, which is all out to exterminate Muslims. By hitting them, the killers convey a message that the chosen lot is unsafe at any cost," he said.

The first killing of a BJP politician after the abrogation of Article 370 was that of senior leader Wasim Bari, who was shot dead along with his father and brother in July 2020 by suspected militants in northern Kashmir's Bandipora area.

Kashmiris say the Modi administration's effort to revoke the region's autonomy made the BJP extremely unpopular there.

"Right-wing Hindu parties were never welcome in Kashmir, but, after 2019, they are looked at as open enemies of Kashmir because of the perception that they want to bring about a demographic change to the region," said Zainub Nabi, a university student.

"The agenda of the BJP to integrate Kashmir with India through demographic change, has turned its workers into soft targets for the local militants."

Masrat Kar, a municipal councilor in restive Sopore town, whose security guard was killed along with two other BJP workers in March, disagrees that only BJP leaders are under militant attack.

"Every pro-India political worker in Kashmir is under threat because New Delhi is failing us. There is no development happening on the ground for which abrogation of Article 370 was termed imperative," she said.

Even as Pandita's killing didn't spark a resignation spree of pro-India political workers, Thakur said authorities have increased the security of 20 BJP workers in southern Kashmir.

Kashmir's inspector general of police, Vijay Kumar, issued an advisory on Thursday for all protected persons in the region, saying they shouldn't go anywhere without personal security officers in the wake of the killing of Pandita, who was unaccompanied by his security guards at the time of the militant attack.

Kumar requested all the protected persons not to violate the advisory and risk their lives unnecessarily.

India and Pakistan continue to clash over Kashmir, a volatile Himalayan region that has been experiencing an armed insurgency for nearly three decades. Many Kashmiris are now fed up with both Islamabad and New Delhi.