Indian Prime Minister Narendra Modi has hailed a "special strategic and global partnership" with Japan, the second-largest economy in Asia. Japan is aiming to expand free trade relations amid US' protectionist policies. 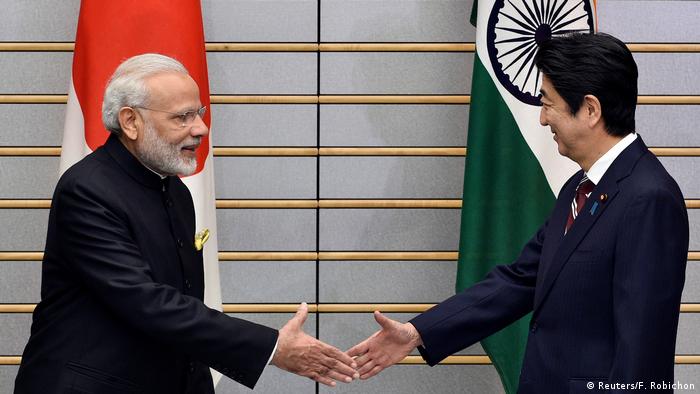 The Indian leader arrived in Japan on Saturday on a two-day official visit and was set to hold talks with his Japanese counterpart, Shinzo Abe.

Abe is set to host a luncheon for Narendra Modi on Sunday at a resort area near Mount Fuji.

Modi, who has met with Abe 12 times since becoming prime minister in 2014, will attend the 13th India-Japan annual summit on October 28 and 29. He'll then have an official meeting with Abe on Monday, after which the two leaders will issue a joint statement.

Trade and security will be high on the summit agenda and during the talks between Abe and Modi.

"The India-Japan partnership has been fundamentally transformed and it has been strengthened as a 'special strategic and global partnership,'" Modi told Japan's Kyodo news agency.

"There are no negatives but only opportunities in this relationship which are waiting to be seized," he added.

Beijing is locked in a trade dispute with Washington, with both countries imposing reciprocal tariffs. Trump has also targeted Japanese exports in his effort to reduce a US trade deficit.

Japan's Foreign Ministry said Saturday that Abe and Modi had lunch on Sunday at a hotel in Yamanashi Prefecture, west of Tokyo, and discussed ways to keep the Indo-Pacific region "free and open" for trade.

Abe also briefed Modi about his discussions with Chinese authorities.

The two-day summit in Japan would also take into account security issues and China's growing influence in the region.

Despite its willingness to bolster trade ties with China, Japan is wary of Beijing's military assertiveness in the East and South China Sea area.

Abe said he will have an exchange of views with Modi on how to "deepen our cooperative ties for peace and prosperity in the Indo-Pacific region," according to Japanese media.

India has a long-standing rivalry with China and the two countries have been locked in territorial disputes for decades.

India and Japan are set to hold their first joint military exercises next month.