India farm laws — what impact will the repeal have on Modi's standing?

The repeal of the contentious agriculture laws represented a rare retreat for Prime Minister Narendra Modi, with some saying his "strongman" image has taken a hit because of it. 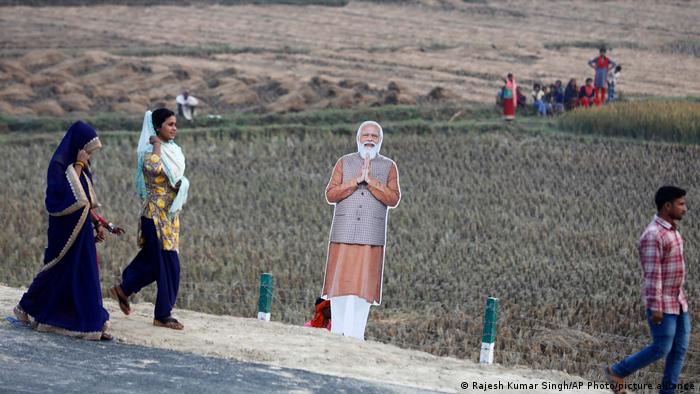 Modi said the farming laws were brought in with good intentions, but that his government failed to convey this to the farmers

Thousands of farmers continue to protest in India even after Prime Minister Narendra Modi on Friday unexpectedly rolled back contentious agricultural laws that his government rammed through Parliament last year, arguing that they would modernize the nation's farm sector.

The laws sparked yearlong protests from tens of thousands of farmers, who feared new rules would dramatically reduce their incomes. The row also posed a significant challenge to Modi's administration.

Modi said the farming laws were brought in with good intentions, but that his government failed to convey this to the farmers. "Maybe something was lacking in our 'tapasya' [penance], which is why we could not convince some farmers about the laws," he said.

The prime minister urged the protesters to return home, but the farmers have said they will stay put until the laws are gone — a process that will begin in the next session of parliament starting November 29.

"The wait has been long but, in the end, victory was ours. The fight will not be over until the laws are formally repealed in Parliament and our demand for a legal guarantee of Minimum Support Price (MSP) for crops is fulfilled," Darshan Pal, of the Krantikari Kisan Union, told DW.

"Families of farmers who lost their lives in protests must be given financial compensation. We have lost over 600 farmers during this agitation," Pal said.

Political analyst Zoya Hasan told DW that the decision to repeal the three farm laws is "a historic victory for the farmers movement."

"It shows that popular pressure works despite a concerted effort by the government to crush it. No government, regardless of the strength of its mandate, can disregard public opinion and voices of people emerging from the ground," she said.

The move represented a rare retreat for Modi, who has stood firm in the face of fierce criticism of his government's policies in the past.

Farmers constitute a particularly influential voting bloc in India, where over 50% of the population is reliant on agriculture to make a living. Farming accounts for about 15% of the nation's $2.7 trillion (€2.27 trillion) economy and over two-thirds of farmers in the country own less than 1 hectare (2 1/2 acres) of land.

The decision came ahead of elections early next year in key states such as Uttar Pradesh and Punjab, which are significant agricultural producers and where Modi's Bharatiya Janata Party (BJP) is eager to shore up its support.

The timing means that the government will find it hard to convince the farmers that the repeal is more than mere political expediency, experts say.

"Regional formations and tie-ups in Uttar Pradesh were posing a huge challenge to the BJP, especially in the western part of the state," Sudha Pai, former professor at the Center for Political Studies at Jawaharlal Nehru University, told DW.

"The decision has not been inspired by a change of heart or change of policy. Instead, it's because the BJP realized the growing alienation, especially among people in Punjab," Pai said.

Anger 'will not subside anytime soon'

The announcement also came on the day when Sikhs, who made up most of the protesters, celebrate the birth anniversary of Guru Nanak, who founded Sikhism.

The laws have particularly alienated the Sikh community, which makes up the majority of the population in Punjab.

Initially, the government had tried to discredit the Sikh farmers, with some leaders in Modi's party calling them "anti-nationals" and "Khalistanis," a reference to a movement for an independent Sikh homeland.

"Our anger against the BJP will not subside anytime soon. They have realized the might of the farmers. After labeling us anti-nationals, Khalistanis and terrorists … can we forget so easily?" Ketki Singh, vice president of the Bharatiya Kisan Union's (BKU) women's wing, told DW.

A dent in Modi's 'strongman' image

The farmers' protests, the handling of the second coronavirus wave in April and May, rising prices, and an absence of jobs, especially in Punjab and several parts of Uttar Pradesh, have made the government susceptible to further pressure.

"Nobody quite expected this reversal. It is a bitter pill to swallow, but, given the realities of realpolitik, this was the decision to take. But it should have been taken earlier," a senior party functionary, who asked not to be named because of the sensitive nature of the issue, told DW.

"Over the last seven years, the BJP government has earned the reputation of being dismissive towards public protests," she said.

"Even an acknowledgment of demands by agitating groups was seen with contempt," she added, "or as a sign of weakness for the government obsessed about projecting itself as strong and decisive."

But the rollback of agricultural laws has now shown that Modi's government is not impervious to popular pressure and that, with determined effort, it can be made to reverse its policies, which could put the government in a tough spot when it comes to introducing reforms in the future.

Indian PM Narendra Modi said he will be repealing three farm laws that have led to massive protests among farmers. He requested the protesters to go home to their families, farms and loved ones.

A look back on India's farmer protests