Farmers in northern India have been protesting against the three laws for over a year. Union leader Rakesh Tikait said they will not call off the protest until parliament formally repeals the laws. 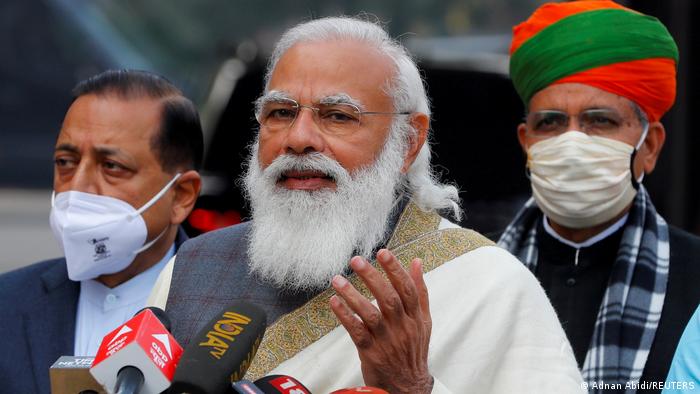 Modi has called on farmers to end their protests

Indian Prime Minister Narendra Modi announced Friday in an address to the nation that he will be repealing three controversial farm laws.

Farmers in the northern part of the country have been protesting against the laws for over a year. The announcement came on the day of Guru Nanak Jayanti, a celebration of the birthday of the founder of Sikhism, Guru Nanak.

"We have decided to repeal all three farm laws. We will start the constitutional process to repeal all the three laws in the parliament session that starts at the end of this month," Modi said in a tweet. He urged the protesting farmers to "now return to your home, to your loved ones, to your farms, and family."

Modi maintained that the farming laws were brought in with good intentions by the government, but they failed to convey this to the farmers. "Maybe something was lacking in our tapasya (penance), which is why we could not convince some farmers about the laws," he said.

How did farmers react to the news?

The speech was given right before Modi left for a three-day visit to Uttar Pradesh. The states of Uttar Pradesh and Punjab are set to hold assembly elections early next year.

Farmers and farmer unions, predominantly from the northern Indian states of Punjab, Haryana, and Uttar Pradesh have been protesting at the borders that they share with capital city Delhi for a year.

Farmers' union leader Rakesh Tikait welcomed the decision on Twitter, thanked the farmers for their efforts and remembered those who lost their lives, saying their "hard work has paid off."

At the protest site, DW correspondent in Delhi, Charu Kartikeya said: "We could hear the sound of firecrackers. We could hear music. People were dancing and a couple of moments ago, we saw a couple of people making and distributing fresh sweets."

However, Rakesh Tikait said the protesters will not be returning from the borders until the laws were formally repealed by parliament. His union would be meeting today "to discuss and review the development and further course of action will be decided accordingly," he told daily newspaper Hindustan Times.

A year of protests

The farmers had begun a march to Delhi against the protests last year, but were stopped by security forces. They had camped at the Singhu, Tikri, and Ghazipur borders of Delhi on two sides, even during the harsh winter months. Volunteers had stepped in to provide food, water, medical services, and even foot massages at the protest camps.

The protests had gained a lot of attention on the international stage as well, with activist Greta Thunberg and pop singer Rihanna also tweeting about it.

The intensity of the largely peaceful protests reduced over the months. A Republic Day rally on January 26 this year turned violent, with one farmer being killed, and dozens of police being injured. During a protest in Lakhimpur Kheri in Uttar Pradesh, a union minister's son allegedly ran over protesting farmers, killing at least eight. He has been detained on murder charges.

Farmers' representatives told The Times of India that more than 600 activists and protesters had died during the protests.

DW's Charu Kartikeya said a "moral pressure" had been building on the government to repeal the laws.

"These farmers have been sitting on Delhi's borders for about a year now, and they have been braving all kinds of hurdles, changing weather patterns, water cannons and they have also braved death."

Opposition politician Rahul Gandhi hailed the victory, and said the nation's food providers had won over arrogance with non-violence.

Lawmaker Mahua Moitra, one of the ruling Bharatiya Janata Party's (BJP) most vocal critics tweeted, "Whether it was fear of losing UP or finally facing up to conscience BJP govt rolls back farm laws. Just the beginning of many more victories for people’s voices."

What is the controversy around India's farm laws?

The Indian government had passed three laws in September 2020 that were supposed to modernize and energize the farming sector.

The measures allowed farmers to directly sell their produce, outside government-regulated wholesale markets, to big buyers.

But the farmers fear that laws threaten their livelihoods and that by easing regulations around the storage and marketing of crops, big corporations will benefit the most, leaving small players at the mercy of the free market.

Over 50% of the Indian population is reliant on farming to make a living. Farming accounts for about 15% of India's $2.7 trillion (€2.27 trillion) economy.

Why are agitating farmers in India publishing their own newspaper?

Narendra Modi: 'We have decided to withdraw all three agricultural laws'