How can India reform agriculture after farmer protests? | Asia| An in-depth look at news from across the continent | DW | 23.02.2021

How can India reform agriculture after farmer protests? 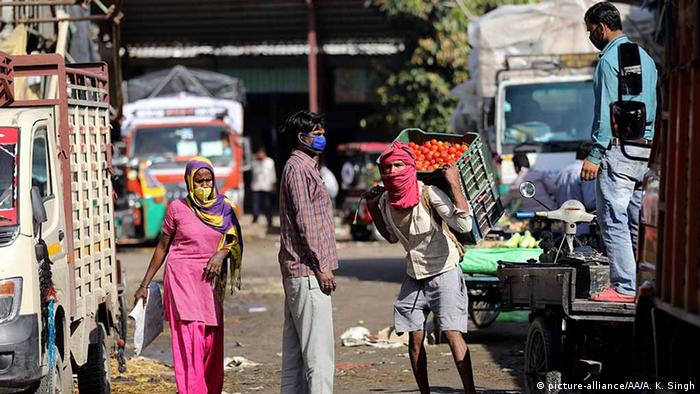 At three o'clock in the morning, farmers in the northern Indian city of Gurugram are seen lining up to sell their produce at Khandsa — a wholesale market yard known as a "mandi."

Farmers come here to sell their fresh produce to arhtiyas — the so-called commission agents who organize the auctions. Each day's auction determines the price of the produce.

An arhtiya typically takes a commission from the day's sale before handing the farmer his or her income.

Officials from various state governments came together in 2003 to set up the Agricultural Produce Market Committee (APMC) as part of efforts to safeguard farmers from exploitation at the hands of large retailers.

The model remains at the center of  the  farm bills put forth by Prime Minister Narendra Modi's BJP-led government. Three bills aim to govern the sale of produce and the storage and hoarding of essential commodities, as well as to outline rules for contract farming.

One of the biggest changes the bill proposes is to allow farmers to sell crops anywhere and to anyone they like, bypassing APMCs, which pay a minimum support price (MSP) for certain produce.

But Sthanu Nair, an economics professor at the Indian Institute of Management (IIM) in Kozhikode, told DW that the APMC model failed to give farmers bargaining power for the prices of their own produce.

"In case a dispute arises, the traders and commission agents dominate the decision making as they have monopolistic power and political backing," Nair said. "As a result, farmers have no choice other than accepting the prices offered to them," Nair added.

Nair said "complementary support mechanisms" would need to be put in place by the government to "empower farmers and reduce their dependency on the agents."

'We want to show Modi our strength'

According to Sudhanshu Mittal, vice president of the Indian Olympic Association and a politician affiliated with the BJP, the farm bills were enacted to address low price yield for farmers, as well as issues with grain procurement, low viability of agriculture and increasing farmer suicides.

"For small farmers, this bill is godsent. It will enable them to get into contract farming, which gives them support for cultivation," Mittal told DW.

Some arhtiyas, such as Raju, insist that the APMCs protect farmers from exploitation as large corporations will offer a greater MSP, rendering mandis redundant in the future.

For Nair, many problems remain unresolved. First, the government should allow farmers to enter into direct marketing arrangements with buyers of their choice, he says.

He believes that the government should then introduce a detailed dispute settlement mechanism to resolve the disputes arising out of transactions between farmers and traders/buyers.

The government should develop a "price information and market intelligence system" for farmers' produce and disseminate it to farmers.

Professor R Ramakumar, from the Tata Institute of Social Sciences (TISS), calls for greater internal reform in the APMC markets, but adds that the entry of the private sector have done little to improve the lives of farmers.

"The private corporate-led models of agricultural modernization have not improved the situation for farmers, but have made them more vulnerable," Ramakumar told DW.

Not all farmers are dissatisfied with the APMC

Supporters of Modi's government say only wealthy farmers with large landholdings and arhtiyas are supporting the farmers' protests against new agricultural laws, as they disproportionately benefit from the APMC model.

In the state of Bihar, the local government replaced the APMCs with Primary Agriculture Credit Societies (PACS) — village level societies that would serve as a middleman in food grain procurement.

"Look at the condition of farmers in states like Bihar where the APMC was taken away. They are now working in Punjab as laborers, although they have more land than us," Satnam, an arhtiya, deplored.

"There is a certain level of trust involved in our transactions with farmers, which will go away if the farm bills are enforced," Satnam told DW.

Ramesh Kumar, a former farm worker from Panchanpura in Bihar, says the PACS process is riddled with obstacles. Farmers are required to register online to be a part of PACS — making it impossible for farmers who don't have access to a computer or smart phone.

"Farmers in Bihar became so poor following the implementation of PACS that they no longer realize that they are actually being exploited. Bihari farmers just farm for subsistence and survival, not profit," Kumar told DW, adding that in the APMC model, payment was made immediately.

Lack of sustainable practices and profitability

For TISS Professor Ramakumar, the most pressing issue in Indian farming is a lack of profitability.

"The cost of inputs has skyrocketed, while output prices have not grown proportionately. This has shrunk profitability. This is where production attention needs to be focused, by upgrading the MSP system, expanding procurement and universalizing the public distribution system," he explained.

Ramakumar believes that a lack of investment in agriculture research has also led to unsustainable agricultural practices in several parts of the country and calls for increased public expenditure.

According to P. Sainath, founder of the People's Archive of Rural India (PARI), India should adopt a more community-centered approach to farming development.

"Community-led agriculture can lead to sustainable agriculture, fairness and justice in the life of farmers and farm laborers, all the while giving one better food and less poisoned agriculture," Sainath told DW.

Sainath pointed out that Indian authorities had appointed the National Commission on Farmers (NCF) in 2004 to establish recommendations, which would alleviate the distressing situation for the country's farmers.

The NCF reports laid out a blueprint for Indian agriculture in the decades ahead with a list of recommendations, one of which many farmers consider central to their lives — MSP = cost of production + 50%.

Despite many appeals to consider the recommendations, the NCF reports lay dormant in Parliament for over 16 years. Now, a number of farmers nationwide are demanding the implementation of the reports instead of the farm bills.

Sainath also stressed that another pressing issue in Indian agriculture is the failure of land reforms. Such failures have led to the concentration of land ownership in the hands of "upper caste" men, excluding women and Dalits (considered "lower castes"), he said.

"We need reforms that give land rights to women, adivasis (tribals) and Dalits. The worst thing possible that you can do to agriculture is to corporatize it. Corporate-led industrial farming will lead to further displacement of livelihoods and human beings," he added.