A court in India has ordered state and federal officials to plan sweeping reforms to eliminate discrimination against LGBTQ communities. But activists say a lot more needs to be done to achieve equality. 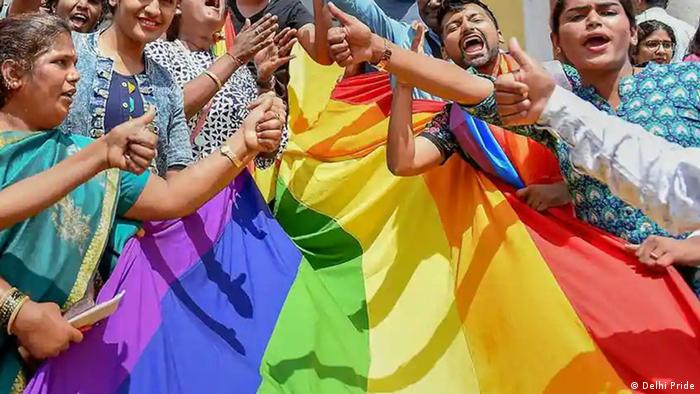 In 2018, India overturned a colonial-era law that criminalizes consensual gay sex, but members of the LGBTQ community say discrimination is still widespread

Manoj (name changed), from the southern Indian state of Karnataka, was forced to undergo the "gay conversion therapy" as a teenager. Now an adult, he lives and works in Delhi, and hasn’t spoken to his family in years.

"I was made to believe there was something wrong with me. I was given shock treatment among other methods. I escaped home as soon as I was financially able to, and have never looked back. It took me a lot of unlearning, but I have finally accepted my homosexuality," Manoj told DW.

Manoj said a ruling by the Madras High Court earlier in June had given him hope that things might get better for him and many other LGBTQ people in India.

The court issued an expansive set of new guidelines that called for the elimination of what it described as illegal discrimination against LGBTQ communities.

What does the ruling mean for LGBTQ people?

The court's recommendations include prohibiting conversion therapy, promoting acceptance of diversity, and creating awareness programs for stakeholders such as the police, judiciary, educational institutions and health care workers.

Judge Anand Venkatesh of the Madras court ordered state and federal government departments to report back with steps that they intend to take to comply.

Medical practitioners who claim to be able to "cure" homosexuality should have their licenses revoked, the judge said. He also said schools and colleges should make gender neutral restrooms available, and gender-nonconforming or trans prisoners should be housed separately if needed to protect them from sexual assault.

Teachers should reach out to parents, to help "sensitize parents on issues of LGBTQIA+ community and gender nonconforming students, to ensure supportive families," his order read.

The court also asked the Social Justice and Empowerment Ministry to publish a list of NGOs that have experience in dealing with issues faced by LGBTQ communities.

How did the court order come about?

The order took place following a case brought by a lesbian couple who reported that they had been harassed by police.

The couple had fled their homes in the city of Madurai to Chennai in the state of Tamil Nadu after their relationship was met with opposition.

Their parents had filed a missing persons complaint when they fled, prompting a police search.

Venkatesh ruled in favor of the couple, who had complained that police had subjected them to harassing questioning after their parents filed the missing persons report.

The couple and their parents were ordered to attend counseling, and further orders will be passed on July 31.

The judge had also used the opportunity to issue the broader ruling to prevent discrimination against LGBTQ communities.

"Ignorance is no justification for normalizing any form of discrimination," Venkatesh wrote in his order.

"The actual problem is not the fact that the law does not recognize a relationship but that the sanction that is accorded by the society is not available. ... I strongly feel that the change must take place at a societal level and when it is complemented by a law there will be a remarkable change in the outlook of the society by recognizing same-sex relationships," the judge said in a statement.

'A long road ahead'

Psychologist Ganga Nair lauded the court's decision. Education is "one of the powerful tools to reduce prejudice," she told DW.

"The Madras HC judgment, with its slew of interventional and protective measures, has not only foregrounded individual choice, agency, rights and autonomy, but also epitomized 'education' as a powerful tool for social reform," Nair said.

"When we think of psychological resources for individuals identifying as queer, it cannot be limited to therapeutic interventions such as psychotherapy and/or counseling at the individual and family level," she added.

Nair stressed that interventions must be "broad in scope" and "include psycho-education and sensitization of the aforementioned social and legal structures, as well as policymakers."

Chandani, a 22-year-old student from Mumbai, identifies as bisexual and is an activist for LGBTQ rights. She told DW that, even though India overturned a colonial-era law that criminalizes consensual gay sex in 2017, many people are still grappling with LGBTQ rights, especially same-sex marriage.

"We have a long road ahead of us. We are far from social acceptance, but the new generation is more aware. I came out of the closet and was accepted by my immediate family, but life is still difficult in India," Chandani said.

Indian transgender politician Apsara Reddy: 'I want to be looked upon as an equal'

Static society, shifting identities: Taboos and the power of Bollywood

The misfortune of having a divine body — In India dicrimination has many different names and faces. By Vinamrata Chaturvedi