Coronavirus: Street crime, cyber fraud on the rise in India

The COVID-19 pandemic has taken a heavy toll on India's economy. Due to an alarming increase in unemployment, many people are resorting to criminal activities to make ends meet. Murali Krishnan reports from New Delhi. 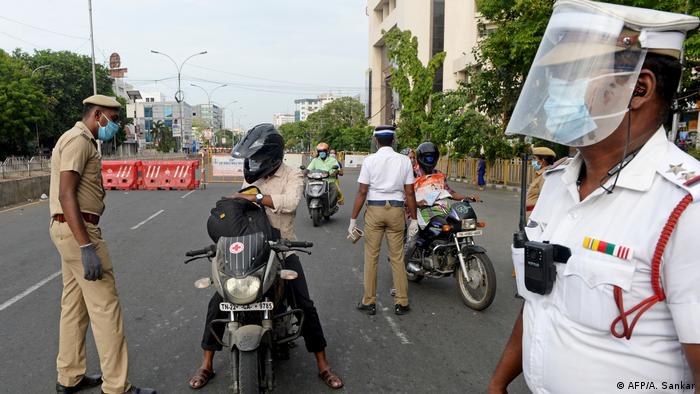 Janaki Devi, a 50-year-old housewife, was taking a morning stroll near a park in southern Delhi when two young men on a motorbike stopped her and snatched her gold necklace.

"Everything happened so fast that before I could react, the men had already fled," Devi told DW.

With the help of CCTV footage, police were able to arrest the robbers, who were students with no prior criminal record.

The number of street crimes in India has spiked ever since authorities began relaxing the coronavirus measures last month.

Last month, a retired Foreign Ministry official's wife was stabbed to death during a robbery attempt. According to police, the crime was committed by a security guard and his associates.

Experts say that the rise in unemployment due to COVID-19 is pushing many people, particularly the youth, toward criminal activities. In one case, two former restaurant managers and a salesman at a hardware store were found guilty of stealing cell phones and jewelry in the capital.

"They recently robbed a food delivery boy," R P Meena, a senior police official, told DW. "In many cases, educated people with no criminal history have been found committing these acts. When we interrogated them, they told us that they didn't have a job and were unable to make ends meet," she added.

India has registered close to a million coronavirus cases and almost 25,000 related deaths. With daily infections rising to a record high, the South Asian country is now the third most affected country in the world, behind the US and Brazil. The pandemic has taken a heavy toll on the country's economy. Many companies have reduced their staff and the informal sector of the economy is suffering badly.

"The unemployment rate is likely to increase due to the pandemic, paving the way for an economic crisis in India," Pradyumna Uppal, a researcher, told DW.

Authorities have also reported an increase in cybercrimes since the start of the pandemic. Police officials in Maharashtra state have registered 400 cybercrime cases against people who were using hate speech on the internet and giving a communal angle to the pandemic.

"We have instructed social media authorities to remove such posts," said Balsing Rajput, an official at Maharashtra police's cyber branch.

Read more: Is flying in India safe amid surge in coronavirus cases?

Officials also say that an increasing number of people complain of being cheated through online transactions.

"We have noticed that cyber fraudsters have created fake websites that resemble shops and home delivery services to lure people into making online transactions," an official said.

Since the easing of lockdown restrictions, there has also been an increase in banking fraud with cybercriminals targeting citizens with fake reactivations of their debit and credit cards, online bookings, free coronavirus tests and foreign job offers.

Police say the cases of "sextortion" have also increased during the pandemic, with cybercriminals tampering women's photos and blackmailing them.

"We have received many complaints of cyber abuse, ranging from exposure to obscene pictures to online threats and blackmailing," Akancha Srivastava, the founder of the Akancha Foundation organization, told DW.

The government has urged citizens to be cautious about fake text messages and emails and report cases of online fraud, cyber threats and blackmailing to authorities.