India-China Himalaya conflict: Does Beijing have an advantage after talks stall? | Asia | An in-depth look at news from across the continent | DW | 10.11.2020

India-China Himalaya conflict: Does Beijing have an advantage after talks stall?

A seven-month standoff between India and China over the Himalayan Ladakh region looks like it will drag on into winter. Experts say China is prepared to take advantage of any complacency on India's side. 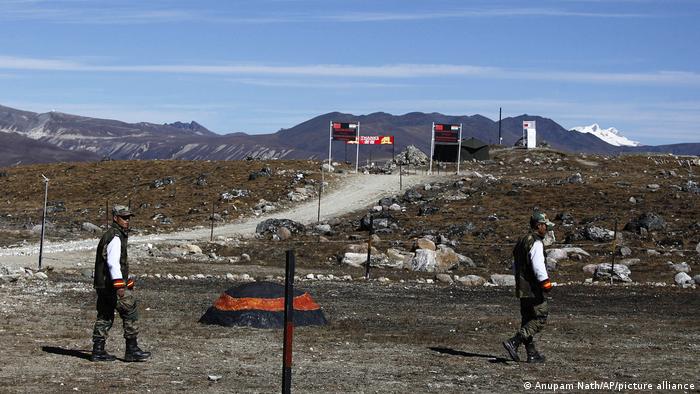 With winter setting in, the armies of India and China are settling in for the long haul in the eastern part of Ladakh, an Indian Himalaya territory bordered by China and part of a tangled territorial dispute between the two Asian powers.

Indian and Chinese military commanders held the latest round of talks over the region on November 6 at the border village of Chushul. Both sides ruled out the possibility of drawing down troops near the so-called Line of Actual Control (LAC), a de facto border between Indian and Chinese claims in the region.

In a joint statement issued after the talks, commanders said their front-line soldiers would "exercise restraint and avoid misunderstanding and miscalculation" and "push for the settlement of other outstanding issues, so as to jointly maintain peace and tranquility in the border areas."

The region has been a sore spot in India-China relations since the 1962 Sino-Indian war, from which the current LAC was drawn.

In June 2020, after the Chinese military gradually built up forces in the region, a skirmish in Ladakh's Galwan River valley left 20 Indian soldiers dead and raised tensions to their highest point in decades.

Stalemate an opportunity for China?

China experts and policy wonks have said there is no sign of drawing down the stalemate, and both armies are prepared for the extended deployment of additional troops brought into the region. 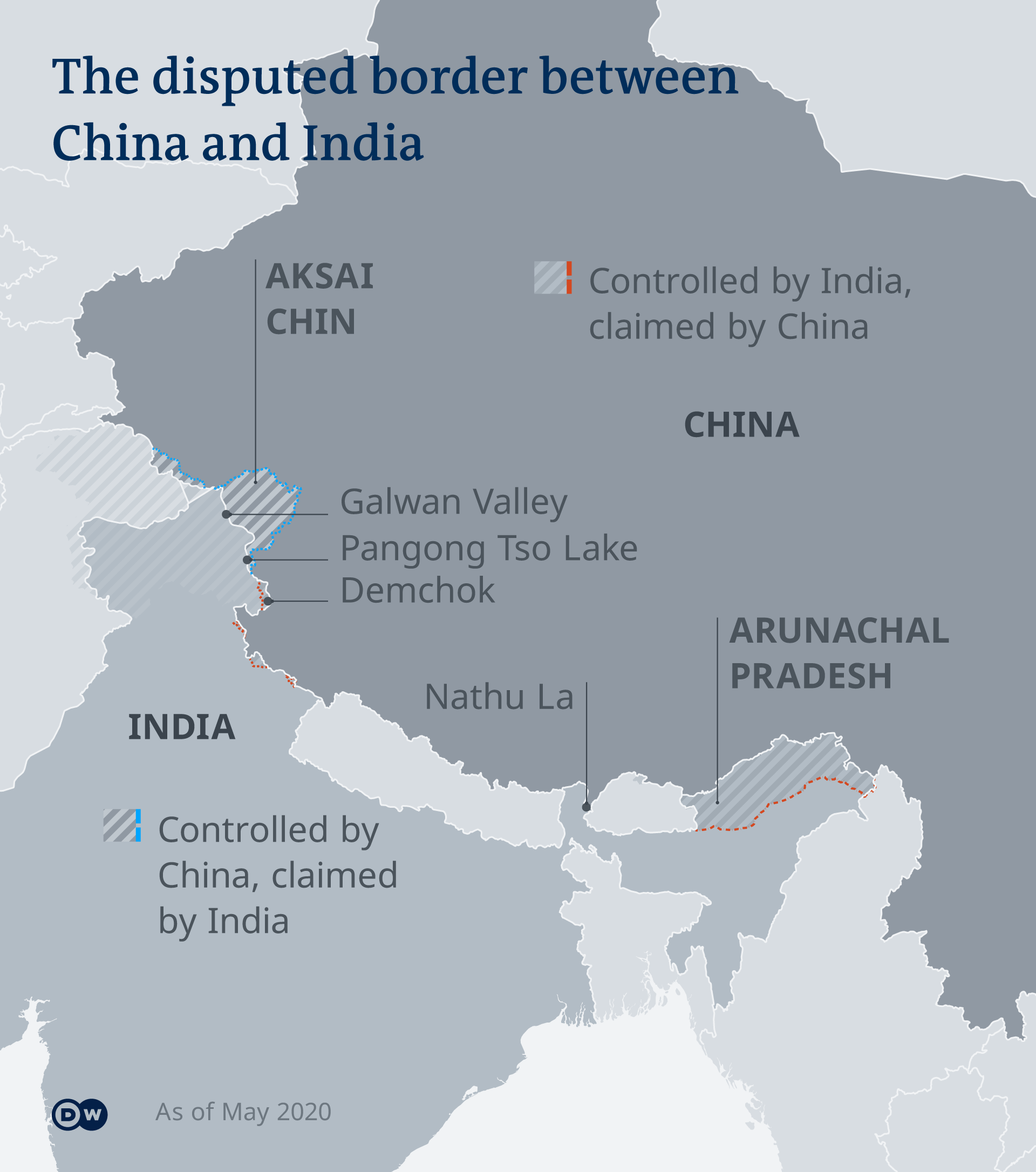 "The eight rounds so far have not yielded full disengagement and de-escalation," Srikanth Kondapalli, a professor of Chinese studies at Jawaharlal Nehru University in Delhi, told DW.

"The armed stalemate currently is sapping both sides, and more so on the Indian side," he said. "It looks like China is trying to use a war of attrition to wear down the Indian forces," he added.

Alka Acharya, a former director of the Institute of Chinese Studies in Delhi, told DW that, although talks are important for avoiding a larger conflict, neither side wants to be seen as backing down.

"Clearly, both sides are holding fast to their respective maximalist positions and neither side wants to be seen as conceding any ground since that would amount to admitting that they may be in the wrong," Acharya said.

"A high degree of nationalist sentiment has been generated, which will be a further retardant on any conciliatory gestures," Acharya added.

No compromise in sight

During the last two rounds of talks, China insisted that India vacate the hilltops it has occupied near Chushul, and on the north and south banks of Pangong Tso lake, through which the LAC runs.

India has insisted on a resolution that covers the entire region.

Indian defense officials told DW on the condition of anonymity that both sides have positioned about 50,000 troops, along with artillery, tanks and air defense assets in the region.

Along several heights in the Pangong Tso area and in the Chushul, the troops from both sides are just a few hundred meters apart. 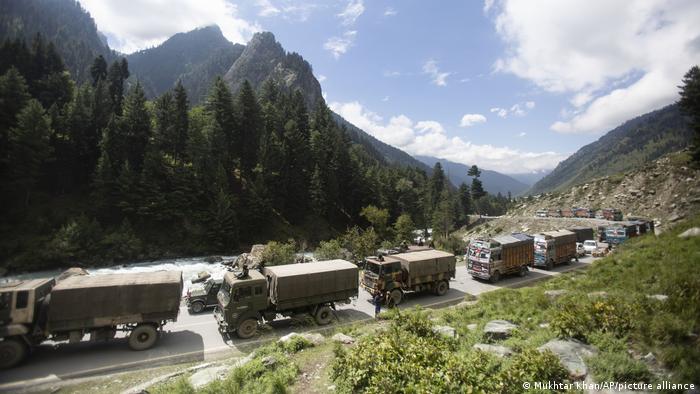 An Indian army convoy on the move in Ladakh

Both sides accuse the other of violating their nearly 3,500-kilometer (2,100-mile) border, most of which remains undemarcated.

The three main friction points have been hot springs in the Chang Chenmo River valley, the Galwan River valley and Pangong Tso.

In a virtual seminar on November 6, India's defense chief, Bipin Rawat, said the situation in eastern Ladakh remained tense, and that India's position is "unambiguous": The country will not accept any shifting of the LAC.

The People's Liberation Army "is facing unanticipated consequences of its misadventure in Ladakh because of the Indian defense force's firm and strong response," Rawat said

Defense experts say China's military does not show signs of being intimidated.

"China is under no compulsion to withdraw its forces and has, by all indications, settled down for a long, hard winter while keeping open the possibility of initiating military conflict," Jayadeva Ranade, a former member of India's National Security Advisory Board and president of the Center for China Analysis and Strategy, told DW.

Ranade said Beijing would continue to maintain a tough, unyielding posture on the border.

"I expect India to either yield to pressure over time, negotiate a compromise, or lower its vigilance and give the Chinese armed forces an opportunity to strike at a vulnerable area and inflict defeat on India," said Ranade.

Modi and Xi at the summit?

All eyes will now be on several upcoming summits, during which Indian Prime Minister Narendra Modi and Chinese President Xi Jinping could have the opportunity to discuss and resolve the standoff.

Though Modi and Xi have met at least 18 times in the last six years, they have not spoken to each other or met since the border tension flared up in June.

Modi and Xi are expected to hold talks on the sidelines of the Shanghai Cooperation Organization (SCO) virtual summit on Tuesday.

Both leaders will also be meeting virtually between November 13-15 at the ASEAN Summit. They are also expected to come face-to-face at two other summits — the BRICS (Brazil, Russia, India, China and South Africa) Summit, chaired by Russia, on November 17, and the G-20, chaired by Saudi Arabia, on November 21-22.