In August, the northeastern Indian state of Assam published its final citizenship list, leaving out almost 2 million people, who now face statelessness. Most of the people whose names didn't feature on the list are reportedly Muslim.

The state government said the National Register of Citizens (NRC) was a yearslong effort to weed out illegal immigration.

Indian authorities are now building a "detention center" in the lower Assam area for these "foreigners." The building in Matia, which is situated around 130 kilometers (80 milies) west of the state's biggest city Guwahati, can house up to 3,000 people. The construction cost for the facility will be around 460 million Indian rupees (€5.85 million, $6.47 million), and the authorities are planning to make it functional in the first quarter of 2020.

"The camp is only for those who have been declared foreigners. Many of them are currently housed in six detention camps in existing jails across Assam. Once the center is ready, we will move them there," Kuladhar Saikia, the state police chief, told DW, adding that more detention camps will be built in the future.

There are approximately 1,140 detainees in the six temporary prison camps in Kokrajhar, Goalpara, Jorhat, Tezpur, Dibrugarh and Silchar.

Spread over 10 acres (4 hectares), the Matia camp will have a hospital, an auditorium, a common kitchen and 180 toilets.

"We will see if children detainees can also be provided with educational facilities," Rabin Das, a local engineer overseeing the construction work, told DW.

In 2014, when the Supreme Court of India directed the authorities to begin the process of updating the 1951 version of the NRC, many, including members of the ruling Hindu nationalist Bharatiya Janata Party (BJP), believed it would provide what is being referred to by the right wing on social media as the "final solution" for Assam's illegal immigration problem, especially from neighboring Bangladesh.

The BJP, led by Prime Minister Narendra Modi, has long opposed illegal immigration to India. In recent years, the party has intensified its campaign for the NRC. But critics say the NRC process reflects the BJP's goal to serve only co-religionists. 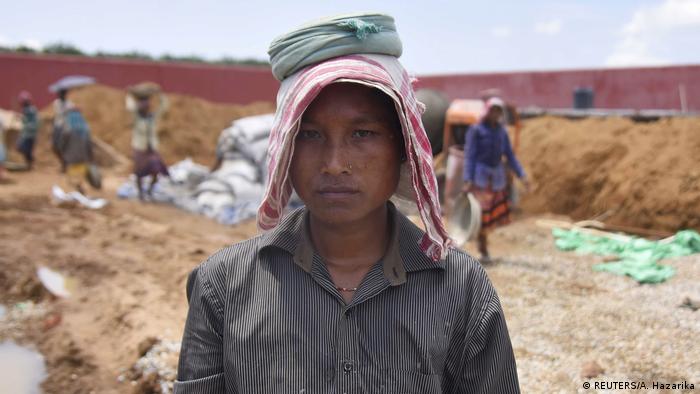 The facility can house up to 3,000 people

Earlier this year, the central government in New Delhi also passed the Citizenship Amendment Bill, which relaxed conditions for non-Muslim immigrants, including Hindus, Zoroastrians, Sikhs, Buddhists and Jains from Afghanistan, Pakistan and Bangladesh to get Indian citizenship.

On August 1 this year, the Assam government published district-wise data of included and excluded people in the draft NRC and the results were surprising. The highest rate of exclusion was recorded in the Hindu-majority Hojai district (32.99%), whereas Muslim-majority districts like Karimganj, Dhubri and South Salmara, which share their borders with Bangladesh, recorded much lower rates of exclusion.

Those who have been left out of the list have 120 days to appeal to the Foreigners' Tribunals against their NRC exclusion. Over 200 new tribunals are also being set up across the state so that these people can challenge the NRC.

Building their own detention centers

Meanwhile, the authorities want to make sure that the construction work at the Matia detention center won't be delayed.

Ironically, several laborers at the construction site are not on the NRC list and are worried about their future. Many of these people are extremely poor, illiterate and belong to the Muslim community.

"I have been working at the site for over six months. I was very worried when I found out that my name was not on the list, but now I am hoping that everything turns out well. What else can I do?" Qasim Ali, a construction worker, told DW.

Many people excluded from the list don't have the financial means to fight lengthy legal battles. Most of them also don't have the documents that can prove their right to citizenship in the country. They fear they will end up in these under-construction detention centers.