In the doghouse: Turkey hits out at German caricature

Turkey has summoned Germany's ambassador to the capital of Ankara over a disputed cartoon, which they claim depicts Turkish President Recep Tayyip Erdogan as a snarling dog. The drawing was first published in 2011. 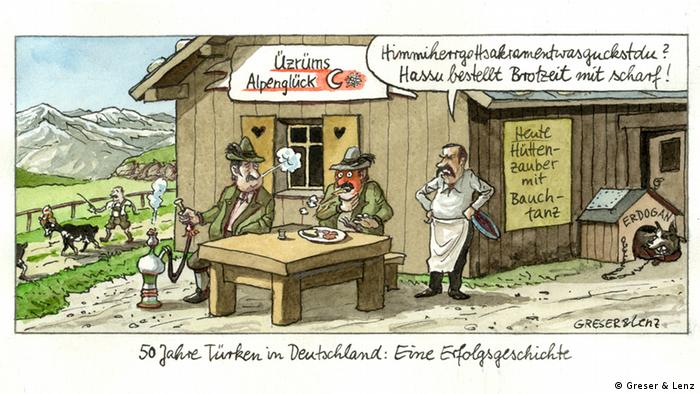 A German caricature, published some three years ago in the German newspaper "Frankfurter Allgemeine Zeitung," has come under fire from Turkey's foreign ministry.

A teeth-baring watchdog, in the drawing by German cartoonists Achim Greser and Heribert Lenz, was previously only a minor character, but is now at the center of a diplomatic dispute. Sitting in his hut, emblazoned with the name Erdogan, the aggressive-looking pooch has a lot to answer for.

The drawing, which was spotted in a social studies school textbook in the German state of Baden-Württemberg, has been criticized for "vilifying" the Turkish President Recep Tayyip Erdogan.

"The drawing offends the Turkish head of state and Turks living in Germany," said a statement issued from the Turkish foreign ministry late on Monday night.

The cartoon titled "50 years of Turks in Germany - a success story" shows two German men in traditional Bavarian dress, smoking a shisha pipe and eating spicy food at a Turkish restaurant in the Alps. The Erdogan dog looks on menacingly.

It shows "an example of successful integration" and is in the "spirit of tolerance and reconciliation," Greser and Lenz told Deutsche Welle.

The Turkish foreign ministry, however, has now summoned Germany's ambassador in Turkey, Eberhard Pohl, to the capital, Ankara, claiming that the impression of the drawing reflects growing racism and xenophobia in Germany.

Both Greser and Lenz told Deutsche Welle that behind Ankara's intervention, there was "megalomania and paranoia" that must be a driving force to get a head of state to get up in arms over a humorous foreign cartoon, "that only a minority of people will see."

"The competencies of humor and irony are unfortunately in decline," said Greser and Lenz. "At best, you'd expect complaints from the German Alpine Society, from Bavarian societies or from Turkish food producers - but not from the Turkish president."

Premier of the German state of Baden-Württemberg, Winfried Kretschmann, responded to the Turkish foreign ministry's criticism from Stuttgart on Tuesday. "It's a mystery to me how someone can get so riled about it," he said.

According to Kretschmann, Baden-Württemberg's Minister for Culture, Andreas Stoch (SPD), and the Turkish Consul Gerneral, Ahmet Akinti, wanted to meet on Tuesday afternoon to discuss the issue.

In the past, Erdogan has dragged cartoonists through the courts on several occasions. In 2005, Musa Kart, a cartoonist for the government-skeptic newspaper "Cumhuriyet," was ordered to pay a 3,500 dollar fine for portraying Erdogan as a cat entangled in a ball of wool.

The EU has repeatedly criticized the narrow limits of free speech in Turkey and is still calling for further reforms from the EU candidate.

Opinion: Erdogan is much too touchy

Erdogan is mad at Germany. And not for the first time. This time, it's about a cartoon showing his name painted on a doghouse. But the Turkish president should stay cool, says Baha Güngör. (04.11.2014)

Protests in the Muslim world continued on Thursday, as many editors and leaders in the region denounced European newspapers for reprinting cartoons depicting the prophet Mohammed. In Germany, press freedom was stressed. (02.02.2006)

Abdullah Gül was elected Turkey's next president on Tuesday. But calls by Prime Minister Erdogan for Gül's critics to give up their citizenship have the media wondering what direction Turkey will take. (28.08.2007)