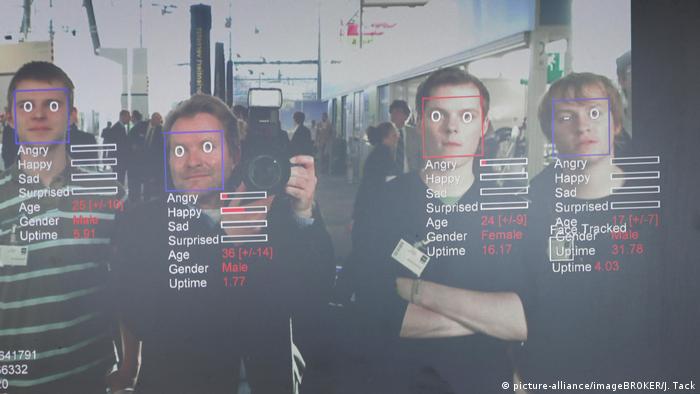 "The system has proved itself so well that its broad implementation is now possible," a thrilled Horst Seehofer announced last October. "Results have shown that facial recognition technology can be of great assistance to our police officers."

The interior minister, who is responsible for ensuring the safety of the German public, was referring to a pilot project to test facial recognition technology at Berlin's Südkreuz train station, a major hub for local and international travelers. 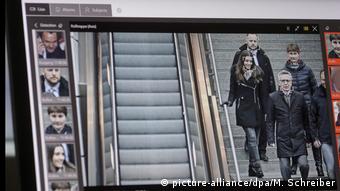 Former Interior Minister Thomas de Maiziere (with glasses, right) took part in a test of the software in 2017

It was at this bustling station that 300 volunteers allowed themselves to be watched by surveillance cameras over the course of one year as they commuted to work or shopped.

Before the project began, images of their faces were entered into a special police database — mimicking the way police deal with real-world suspects.

Those images were constantly updated with video recordings from cameras installed in every corner of the space. Software developed for the experiment alerted officials every time a volunteer was picked up on camera.

According to the Interior Ministry, the system averaged 80% accuracy, meaning only one in five people went unnoticed. The ministry also claimed that averages for false positives were significantly lower, pointing out that the software only falsely identified one in 1,000 people as a person of interest. It's low, but in the real world that error rate could still have grave consequences for an innocent person mistakenly arrested by police.

Despite such risks, Dieter Romann, the head of Germany's federal police force, has praised the possibilities presented by facial recognition software. He said it makes it easier to recognize and apprehend criminals without the need for special police operations, "a major victory for security." But Romann and Seehofer will have to be patient: Germany currently lacks a clear legal framework for the implementation of advanced video surveillance technology.

On Wednesday, proponents of the new technology came one step closer to realizing their plan when an administrative court in Hamburg declared that an order to delete a controversial database containing images of the 2017 G20 summit protests in the city had been illegal. Local police were using Videmo 360 facial recognition software to identify people who took part in violent acts during the event.

The images were largely gleaned from video surveillance cameras in the city; some stationary, others mobile. But police also have access to private photos and videos taken during the demonstrations. All of the material is currently stored on hard drives at the Hamburg police department.

Johannes Caspar, the city-state's commissioner for data protection, has argued there is no legal justification for collecting and storing the biometric data of the crowds of innocent citizens "in order to compare them to suspects one day."

Surveillance tech in every train station

Caspar is now considering whether to appeal the court's decision. Meanwhile, a second pilot project was launched in June at the Südkreuz station, details of which were recently submitted to parliament in response to a request by the far-right Alternative for Germany party.

Federal police claim the new facial recognition technology will provide a "more effective defense" against typical threats, which they have been simulating at the station. Scenarios in which the technology has proven useful, according to police, include standard situations like unaccompanied bags, or the appearance of "streams or clusters of people."

German train stations are often the scene of dangerous or, at times, deadly incidents. In July, an 8-year-old boy was killed after he was pushed onto the tracks by a man at Frankfurt central train station. Seehofer aims to install video surveillance technology in almost all of Germany's major train stations by 2024, and says facial recognition software will be an important part" of this campaign.

But Seehofer will need the backing of the entire government before he can move forward — and it remains unclear whether he will get it. Commenting on the conclusions of the first Südkreuz pilot project, Seehofer said opinions "have not yet been entirely formed." Unlike members of Seehofer's conservative Christian Social Union and its sister party, Chancellor Angela Merkel's Christian Democratic Union, some members of the governing coalition's center-left Social Democrats are skeptical.

Others have also voiced their concern over the increased use of facial recognition technology. In July, the nongovernmental organization Society for Civil Rights (GFF) submitted a constitutional complaint against automatic passport photo searches by police and intelligence services.

Until 2017, German law only allowed such searches to be conducted in criminal cases, but an amendment now allows searches even in instances when authorities have no basis for suspicion. Bijan Moini, a lawyer representing GFF, now fears that a "national database of biometric features is being compiled."

From August, a train station in Berlin will be the testing ground for surveillance cameras with biometric face recognition capability. Here is an overview of the most important information and a look at the controversy. (31.07.2017)

The battle for the European Parliament is raging, with everyone from populists to pan-European newbies fighting for votes. Voting advice apps offer users help making a political choice. But is that all they do? (11.05.2019)

'Tis the season to be careful. From now until Christmas, Germans can get daily lessons on how to protect themselves online by opening the doors of a virtual Advent calendar provided by anti-surveillance advocates. (01.12.2017)