In Azerbaijan, EU focuses on energy instead of democracy | Europe| News and current affairs from around the continent | DW | 08.10.2013

In Azerbaijan, EU focuses on energy instead of democracy

As Azerbaijan votes in presidential elections, the EU has largely remained silent about democratic deficits in the Caspian nation. Europe needs Baku's natural gas to wean itself off of Russian energy. 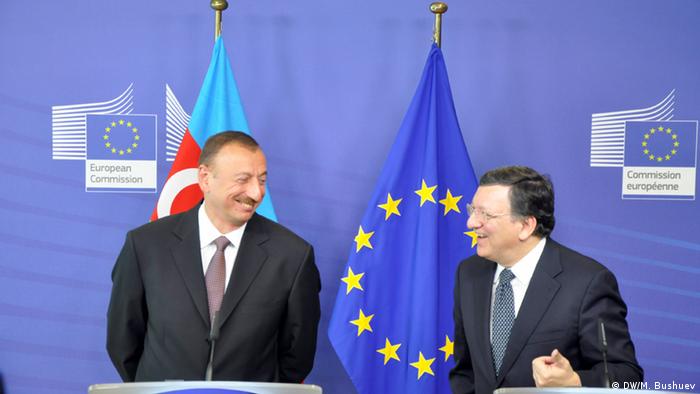 The news came three days ahead of the German federal elections on September 22 and went nearly unnoticed: Eon, Germany's biggest energy group, signed a gas deal with Azerbaijan. The company will import 40 billion cubic meters of natural gas over the next 25 years from the Shah Deniz field, Azerbaijan's biggest natural gas field in the Caspian Sea.

The natural gas will be imported starting in 2019 through the Trans-Adriatic Pipeline (TAP). The construction of TAP was decided in June of this year. Although the European Union favored another project - the Nabucco-Pipeline- Brussels is now delighted about the new energy source. The EU wants to become more independent from Russian energy supplies.

On Wednesday (09.10.2013), oil-rich Azerbaijan is voting to elect a new president. If history is any indicator, the incumbent president is likely to win. Ten years ago, President Ilham Aliyev was elected with nearly 80 percent of the vote. And in the 2008 election, he got more than 88 percent of the ballots, with a similar result expected this time around. Polls predict a landslide victory over his nine contenders.

Unequal chances for the opposition

Ahead of the ballot, the Azerbaijani election supervisor spoke of democratic elections. But regional experts like Uwe Halbach from the German Institute for International and Security Affairs (SWP) disagree. The presidential elections "will not be free and fair," Halbach said.

"In the media, the president predominates and there is bullying of the opposition and limitations put on freedom of assembly," Halbach told DW.

Canan Atilgan, director of the regional program "Dialogue with the Caucasus" from the Konrad-Adenauer-Stiftung (KAS), said that calling the elections democratic would be "too optimistic." According to Atilgan, the cards are stacked against the opposition candidates.

Rustam Ibrahimbekov, the common candidate of several opposition parties, was not approved because he was holding a Russian passport and was living abroad. The opposition group "National Council of the Democratic Forces" appointed the historian Jamil Gasanly, but his result is expected to be in the single digits. Everything suggests that the only political dynasty in the post-Soviet region will be extended by another five years.

The Aliyev dynasty secures its power 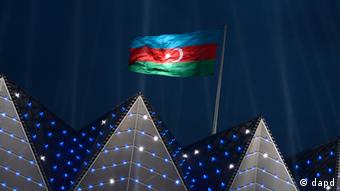 The 51-year-old Aliyev inherited the presidency from his father Geidar in 2003. Geidar Aliyev ruled the resource-rich nation for ten years as president and before that as the Communist Party leader.

Although Ilham Aliyev was originally not allowed to run for president after two terms, he amended the law through a widely criticized referendum, changing the rules so that he can now run indefinitely.

For years, human rights organizations like Amnesty International (AI) and Human Rights Watch (HRW) have denounced the situation in Azerbaijan. Dozens of political activists and journalists are imprisoned, according to a report published in September by HRW.

There are similar conditions in other successor states of the Soviet Union like Belarus, where the EU has imposed sanctions against the government in Minsk. The Belarusian President Alexander Lukashenko is not allowed to travel to the EU.

But the EU handles Azerbaijan differently. Ilham Aliyev travels frequently to Europe and is hailed for his "vast progress" in modernizing his country. EU Commission President Jose Manuel Barosso expressed this opinion during a meeting with Aliyev in June 2013.

And Azerbaijan's president rejects criticism from Western media. "We have a free press, censorship does not exist and all political parties operate freely," Aliyev said.

The opposition in Azerbaijan, for its part, accuses the EU of double standards. "Belarus is put under much stronger sanctions than Azerbaijan is, although the political developments are not that different," Halbach said.

Azerbaijan is an energy supplier for European countries, which makes "more difficult for the EU to criticize political developments there," according to Halbach. As a result, Azerbaijan is becoming an "increasingly self-confidence country," he said. 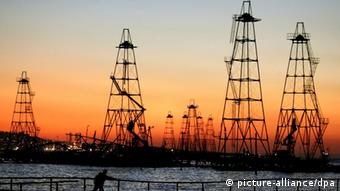 An offshore oil plattform near Baku

Western companies have produced oil in the former Soviet republic since 1994, and they will begin producing natural gas there as well in the near future. In 2011, the EU and Azerbaijan signed a common declaration in which Baku obligated itself to deliver natural gas to Europe. The plan will be implemented with the construction of the Trans-Adriatic Pipeline.

It would be wrong to say that the EU remains completely silent on democracy in Azerbaijan, according to Atilgan from KAS. Germany voiced its concerns ahead of the Eurovision Song Contest in 2012, which was held in Azerbaijan's capital Baku. But the EU's overriding interest in Caspian natural gas dominates its relations with Baku, the KAS expert said.

In the run-up to the election, the EU has largely refrained from criticizing the Azerbaijani government. A week ago, EU foreign affairs chief Catherine Ashton and EU Enlargement Commissioner Stefan Füle issued a statement expressing their concern about pressure put on "opposition activists, civil society and independent media" in Azerbaijan. The two EU officials said that Brussels would monitor the situation.

Gazprom's monopoly soon a thing of the past?

Russia's energy giant Gazprom is finally facing real competition. More Russian gas producers are aiming to get a foot into global markets. For consumers, this may have the pleasant side effect of lower energy bills. (27.05.2013)