In a government address, Merkel urges dialogue with Russia

Ahead of a key meeting of European and Asian leaders, German Chancellor Angela Merkel has called for dialogue with Russia. Merkel is set to meet her Russian and Ukrainian counterparts at the Milan summit. 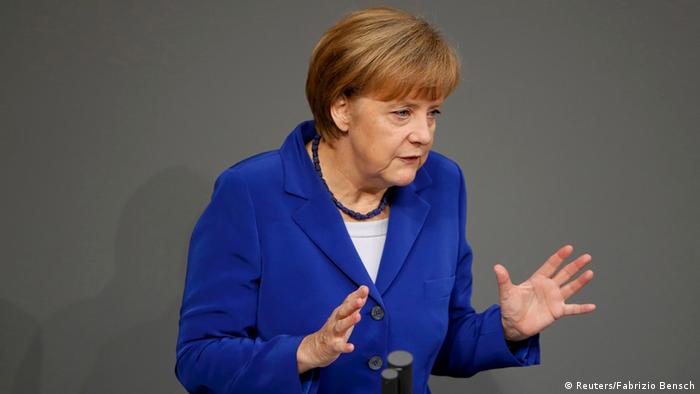 In a 20-minute address to the German parliament on Thursday, covering a range of policy issues, German Chancellor Angela Merkel placed emphasis on the crisis in Ukraine. Merkel's speech came ahead of direct talks with Russian and Ukrainian leaders at the European-Asian ASEM summit that also opens on Thursday in the Italian city of Milan.

"The situation on the ground in Ukraine is dire," Merkel said in front of Bundestag lawmakers, adding: "I will speak face-to-face with [Russian President Vladimir Putin] and [Ukrainian President Petro Poroshenko] about ways to move forward in constructive fashion while in Milan."

"Sanctions, however necessary, do not preclude dialogue," Merkel said, with regard to EU economic restrictions, backed by Berlin, currently in place against Moscow.

Sanctions for alleged "aggression" in eastern Ukraine are "absurd," Putin said as he made his way to Milan for the two-day talks. "It is difficult to understand the logic" behind the decision of the United States and European Union to impose trade sanctions against Russia," Putin told the Belgrade daily "Politika."

With regard to Russia's unwavering support for separatists in eastern Ukraine, as well as the annexation of Crimea in March, Merkel's message for Putin was clear: "There remains no doubt that violations of Ukraine's territorial integrity, or any breach of international law, will not go unpunished. It is up to Russia to make the decisive contribution to de-escalation; together with Ukraine, it must fully implement the ceasefire."

Merkel's talks with Putin in Milan won't dwell merely on Ukraine or economic sanctions, however, as the two leaders are also to discuss ways to ensure "uninterrupted gas supplies from Russia to Europe, ahead of the autumn and winter." 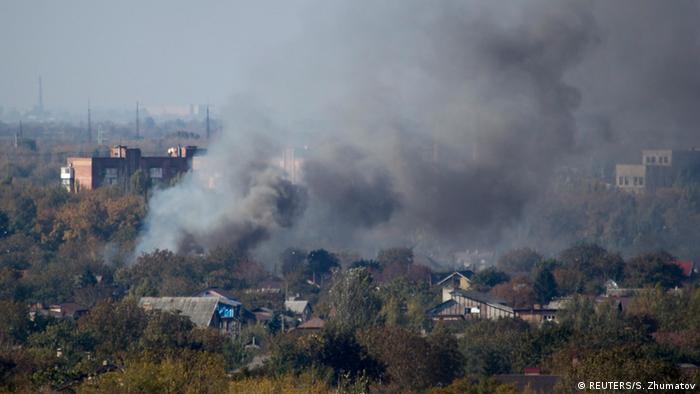 Fighting in Donetsk has continued unabated despite the ceasefire

Euro crisis 'not over'

Merkel's address quickly moved to other economic matters, namely the "ongoing" financial crisis in the EU.

"The crisis has not yet been overcome," Merkel warned, "not fully, not in any lasting, sustainable way."

The chancellor went on to underline her intention of campaigning for more fiscal cooperation and coordination among member states."Every EU nation must fully accept the rules of the stability and growth pact," Merkel said.

"This is the only way that the pact can fulfill its function as a central anchor of trust - and above all confidence - in the eurozone," she said, referring in the latter to the 18 EU members that use the euro currency.

Though Merkel didn't specifically name France in her admonishing remarks, they could be construed as a clear message to Germany's southwestern neighbor. The Socialist government in Paris recently put forward plans that would increase the deficit, breaking a promise to bring it below the EU limit of 3 percent of GDP within two years.

The EU executive will decide in the coming weeks whether to force profligate member states to rework their budgets.

Asia and Europe meet in Milan

ASEM, the Asia-Europe Meeting, has been taking place for the past 18 years, but it has rarely been in the spotlight. Concrete decisions are rare. Ukraine is one of many issues set to be discussed on the sidelines. (16.10.2014)

Kiev says the leaders of Ukraine and Russia are to meet next week in Italy and will discuss eastern Ukraine's fragile ceasefire and gas supplies for winter. In eastern Ukraine a no-shooting period had been agreed. (11.10.2014)