Kiev says the leaders of Ukraine and Russia are to meet next week in Italy and will discuss eastern Ukraine's fragile ceasefire and gas supplies for winter. In eastern Ukraine a no-shooting period had been agreed. 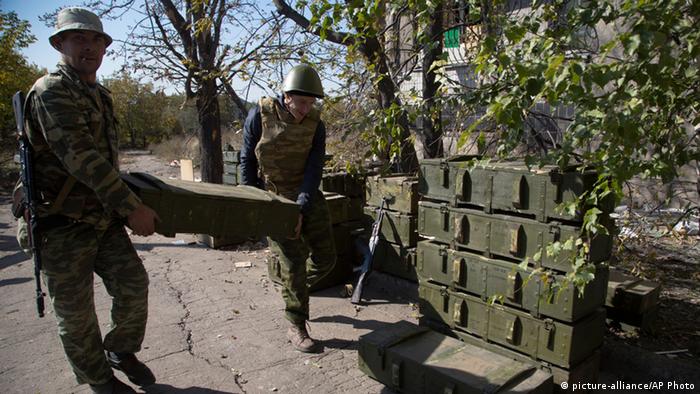 Ukraine's President Petro Poroshenko on Saturday said he would meet with Russia's Vladimir Putin in Italy next Friday.

Their talks on the six-month conflict in eastern Ukraine between pro-Russian separatists and Kyiv forces will coincide with the Asia-Europe Meeting in Milan that is also due to be attended by the prime ministers of Italy and Britain and German Chancellor Angela Merkel.

Poroshenko, while visiting the eastern Ukrainian city of Kharkiv on Saturday, said he would discuss the peace plan and "the issue of controlling the fulfilment of the agreement."

Pro-Russian, Donetsk rebels and newly-appointed Donetsk governor Oleksandr Kykhtenko both announced on Saturday that an agreement had been reached to stop firing as of 9.00 a.m. (0600 UTC).

Kykhtenko's predecessor, Sergiy Taruta, was sacked by Poroshenko on Friday. The no-shooting period was expected to last for five days.

Ukraine military spokesman Andriy Lysenko said: "We are ready to abide by the agreement on pulling back heavy equipment ... as soon as the terrorists stop firing at our positions and residential areas."

Four civilians have been killed since Friday, according to authorities in the Donetsk and Lugansk regions. A border guard died after a Ukrainian convoy was attacked by rebels about 20 kilometres south of Donetsk, according to the military.

The United Nations said 300 people have died as rebels and government forces exchanged rocket fire in recent weeks. Both sides have blamed the other for violating the September agreements which committed them to a ceasefire, pulling back heavy artillery to create a 30-kilometre (18-mile) wide demilitarised zone.

The government in Kiev has accused Moscow of supporting the insurgency in Ukraine's Donetsk and Lugansk regions by sending regular contingents across the border which the government no longer controls.

The talks next week in Italy are also to cover the dispute over gas supplies to Ukraine from Russia. Ukraine has been without Russian gas since June because of a dispute over payments.

The European Union, Ukraine and Russia are trying to broker a deal that would see Russian giant Gazprom resume gas shipments to Ukraine this winter. Natural gas accounts for about 40 percent of Ukraine's total energy consumption.

"We are very close to regulating the issue of the gas dispute with Russia right now," Poroshenko said. "I hope that there will be considerable progress."

Donetsk governor Kykhtenko also said the meeting would address the threat of the population in eastern Ukraine being cut off from Kiev's support ahead of a cold winter: "The president of our country will be meeting the head of Russia and will address these issues," Kykhtenko said at a press-conference on Saturday.

"The key and main question is peace. Russia's role in the issue of providing peace, as you understand, is difficult to overestimate," Poroshenko said. "And today we raise the issue of moving from declarations to concrete steps."

Separately, Russian Foreign Minister Sergei Lavrov and US Secretary of State John Kerry are expected to discuss the situation in Ukraine at a meeting in Paris next Tuesday.