The International Court of Justice (ICJ) has ruled that a contested maritime border between Somalia and Kenya should be adjusted in a way that grants Somalia rights over most of an oil-rich chunk of the Indian Ocean. 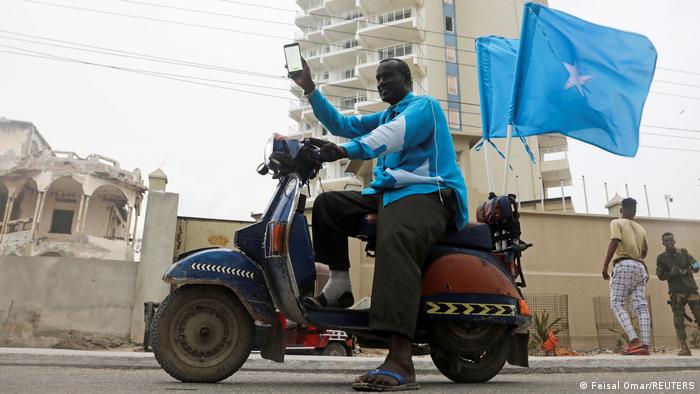 A man seated on a scooter with Somali flags, celebrates the International Court of Justice ruling in Mogadishu

Somalia appears to have benefited most from an International Court of Justice (ICJ) ruling on a contested maritime boundary with Kenya.

In a lengthy judgment made in The Hague on Tuesday, judges at the top UN court ruled that there was "no agreed maritime boundary" in force, and drew a new border line close to the one previously proposed by Somalia.

Judges rejected the line Kenya proposed extending from its coast, saying it would have had a "severe cut-off effect" for Somalia. The court's line adjusted Somalia's proposal slightly, saying Kenya was at risk of its having maritime rights squeezed between Tanzania to the south and Somalia to the north.

ICJ President Joan Donoghue reading a summary of the judgment, said the court was "satisfied" that the adjusted line "achieves an equitable solution."

The court found that Kenya had failed to prove there was an established sea boundary between the countries, which would have given it a greater piece of the contested territory.

Although the ICJ decision cannot be appealed and is legally binding, it has no mechanism to enforce rulings. However, states can turn to the UN Security Council if another country fails to obey a ruling.

Kenyan President Uhuru Kenyatta said his government "rejects in totality and does not recognize the findings in the decision."

Nairobi had already made it clear last week that it would no longer acknowledge the court's jurisdiction, calling the ICJ "biased."

What is the dispute about?

Somalia opened the case against Kenya in 2014 over contested parts of the Indian Ocean believed to have rich natural oil and gas reserves. The claim involves 100,000 square kilometers (nearly 40,000 square miles) of seafloor which both countries lay claim to.

The core contention is the direction in the which the joint maritime boundary lies. Somalia believes that the boundary should follow its land border and head out in a southeasterly direction.

Kenya believes that the line runs in a straight easterly direction of its coastline, essentially granting it rights to the portion of sea in question.

According to the court's decision, Somalia now has control of most of the contested territory, while Kenya got a smaller piece.

How did Somalia respond?

"The rule of law has succeeded, this victory belongs to the Somali people. I thank the World Justice Court who supported the rule of law," Mohamed said.

The Somali president also called on Kenya to "respect the international rule of law," adding that it "should instead see the decision of the court as an opportunity to strengthen the relationship of the two countries."

Somalian Information Minister Osman Dubbe took to Twitter to express his satisfaction with the court's decision and said: "Finally we made it. Thanks to all great lawyers who represented Somalia on the International Court of Justice."

But Kenyan President Kenyatta said that the ruling amounted to "a zero-sum game, which will strain the relations between the two countries."

"It will also reverse the social, political and economic gains; and potentially aggravate the peace and security situation in the fragile Horn of Africa Region," he added.

Can the ruling be enforced?

The judgment has raised some questions among Kenyan commentators.

Peter Kagwanja, a diplomatic specialist in Kenya, told DW that Somalia disputed Kenya's claim in 2014 as part of an "expansionist agenda" to "encroach on Kenya's territory."

"The ICJ is an arbitration court. It is not a court of justice. You cannot arbitrate between two neighbors who have not talked at all. What are you arbitrating?" he said.

Kelvin Mogeni, who is president of the Kenyan chapter of the ICJ, told DW that it remained to be seen whether the ruling could be acted upon.

"That decision remains a good decision only when it can be implemented. Implementation on international law is a question of determining how powerful that country can be to implement it, and if the other one refuses, then you have to use force," Mogeni said.

Kenya made the decision to revoke recognition of the court's jurisdiction just days ahead of the ruling. The matter has strained diplomatic relations between the two countries.

"The delivery of the judgment will be the culmination of a flawed judicial process that Kenya has had reservations with, and withdrawn from, on account of obvious and inherent bias," Kenya's Foreign Ministry said.

However, in this regard, the court also found no compelling evidence that Kenya should pay any reparations for maritime activity conducted in the area, because of the uncertain status of the boundary line.

Several people have been killed in a car bomb attack at a checkpoint close to the president's residence in Mogadishu. The ultraconservative jihadi group al-Shabab has claimed responsibility.