Several people have been killed in a car bomb attack at a checkpoint close to the president's residence in Mogadishu. The ultraconservative jihadi group al-Shabab has claimed responsibility. 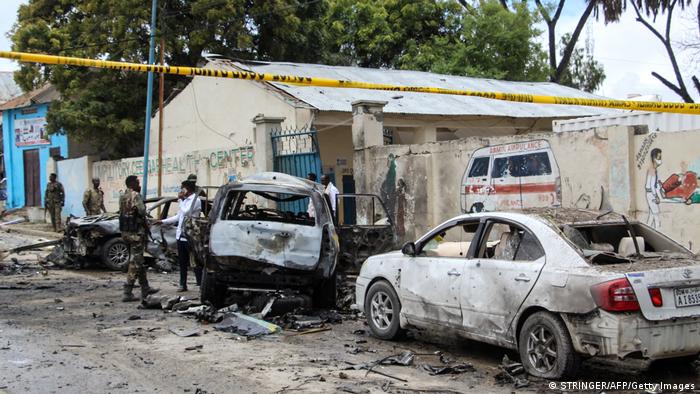 The driver detonated his explosives at a police checkpoint

A suicide car bomb attack killed at least eight people in the Somalian capital Mogadishu on Saturday. The Islamist group al-Shabab has claimed responsibility for the attack that took place close to the presidential palace.

"We have confirmed that eight people most of them civilians died and seven others wounded in the car bomb blast," district police chief Mucawiye Ahmed Mudey told reporters.

The driver of the vehicle detonated the explosives when police stopped him at a checkpoint, witnesses said. The explosion was less than a kilometer away from the Villa Somalia palace.

"They normally stop to check and clear vehicles before they can pass by the checkpoint. This car was stopped by the security guards and it went off while there were several other cars and people passing by the nearby road. I saw wounded and dead people being carried," witness Mohamed Hassan told news agency AFP.

The checkpoint where the attack happened is used by the president and prime minister to get to and from the airport in the capital Mogadishu.

One of those killed in the attack was Hibaq Abukar, an adviser for Prime Minister Mohamed Roble on women and human rights.

"We have to cooperate in the fight against the ruthless terrorists who regularly kill our people," Roble said. He went on to pay tribute to Abukar, calling her "a young hard-working vibrant girl with honest" as well as a "devoted citizen." 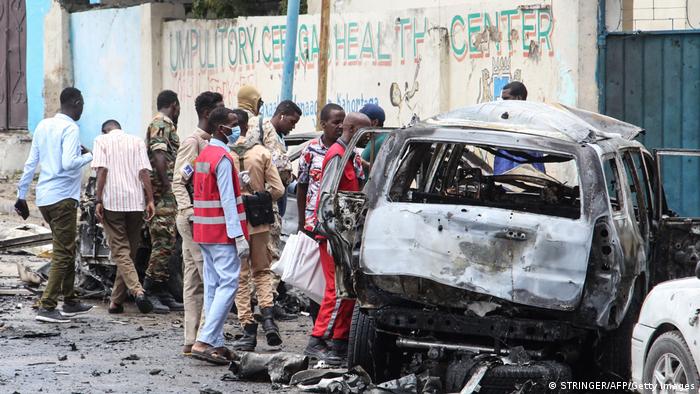 The al-Qaeda-affiliated al-Shabab terror group ruled Mogadishu until 2011 when African Union troops expelled them from the city.

They have remained in control of territory in the surrounding countryside ever since, from where they have launched frequent attacks against government and civilian targets.

Saturday's attack came during a moment of tension between the country's president, Mohamed Abdullahi Mohamed, and Prime Minister Roble over the hiring and firing of security staff. The discord has threatened to delay parliamentary elections that had been set for October 10.

Somalia has been in a state of ongoing conflict since the fall of dictator Mohamed Siad Barre in 1991. His departure left the country without a functioning government, leading to a power vacuum that was filled by warlords and militias such as al-Shabab.