'I Have a Dream': On the lasting power of Martin Luther King Jr's words

50 years after the assassination of civil rights activist Martin Luther King, his words — and especially his 1963 "I Have a Dream" speech — have an unparalleled resonance. But why has his voice had such staying power? 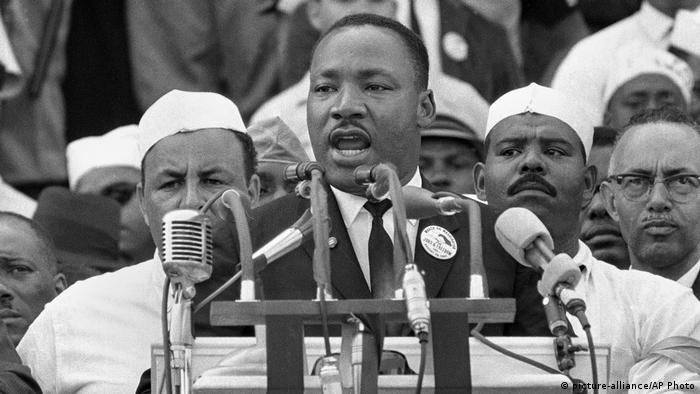 "I have a dream that my four little children will one day live in a nation where they will not be judged by the color of their skin but by the content of their character. I have a dream today."

Those words, delivered by Martin Luther King Jr. from the steps of the Lincoln Memorial on August 28, 1963, continue to resonate 50 years after the death of the pastor and civil rights activist.

They are part of King's iconic "I Have a Dream" speech that has since been taught in schools, reprinted in university textbooks, featured in numerous documentaries about the era, quoted by former US President Barack Obama, and even sampled in music by the likes of Michael Jackson and rapper Common.

For fellow civil rights activist John Lewis, who also spoke that day at the "March on Washington for Jobs and Freedom" in 1963, it wasn't the words alone that influenced people. The current Democratic Congressman who as a young man was on the frontline of the civil rights movement, spoke on the "Newshour" program on PBS about King's own unique charisma

"Dr. King had the power, the ability, and the capacity to transform those steps on the Lincoln Memorial into a monumental area that will forever be recognized," said Lewis. "By speaking the way he did, he educated, he inspired, he informed not just the people there, but people throughout America and unborn generations."

From a rhetorical perspective, the man who would come to embody the US civil rights struggle had employed many speaking strategies that ensured his words would resonate with his audience. A preacher by vocation, King interwove not only references to his Christian religion, but drew on biblical stories and quotations that would be especially meaningful to the public gathered before him.

By combining scriptural reference like this with vocabulary taken from traditional American hymns like the patriotic anthem "America" — which recites that "My country tis of thee, sweet land of liberty" — King created his own unique voice through a rhetorical process known as "voice merging."

The effect was to stir up emotions that move beyond the meanings of the words themselves, relying instead on the emotional impact of the greater meaning.

The "I Have a Dream" speech may be King's most memorable, but it is neither the first nor the last to employ this strategy. In his "Letter from a Birmingham Jail," written on April 16, 1963 after King's arrest in Alabama for civil disobedience, he wrote:

"Just as the prophets of the eighth century B.C. left their villages and carried their 'thus saith the Lord' far beyond the boundaries of their hometowns, and just as the Apostle Paul left his village of Tarsus and carried the gospel of Jesus Christ to the far corners of the Greco-Roman world, so am I compelled to carry the gospel of freedom beyond my own home town. Like Paul, I must constantly respond to the Macedonian call for aid."

Even without knowing the particular Bible story references, parallels are drawn that allow for readers of the letter to grasp the intended meaning. 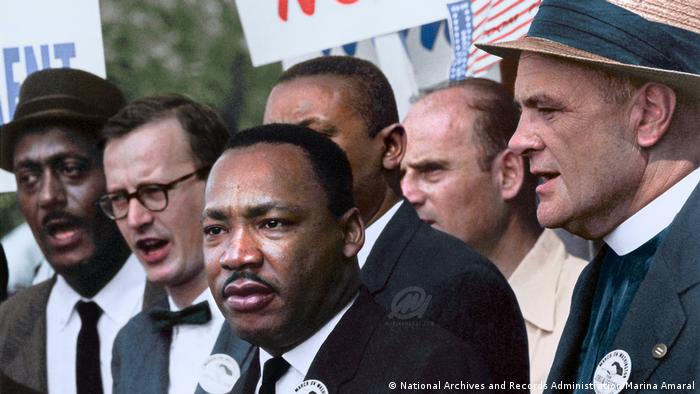 Martin Luther King Jr. at the civil rights march on Washington, D.C. in 1963

King's rhetorical abilities were so powerful that immediately after delivering the speech at the Lincoln Memorial, the civil rights activist landed on the FBI's radar as a person to watch closely.

Indeed, some conspiracy theories link the FBI with King's death, causing some to note the irony when the intelligence organisation released this tweet on the 49th anniversary of his assassination.

On the eve of the 50th anniversary of King's murder, King's rhetorical gifts were literally passed down through the generations as his granddaughter Yolanda Renee King addressed a massive crowd at the March for Our Lives rally in Washington D.C. on March 28.

"I have a dream that enough is enough. And that this should be a gun-free world — period,” she said, reviving her grandfather's ultimate dream to live in a non-violent world.

At an April 2 ceremony held in Boston – where King obtained his doctorate in theology and met his wife, Coretta Scott King – to read the "I Have a Dream" speech for the public and consider its lasting impact, Deval Patrick, Massachusetts' first black governor, reiterated that King's words were just as inspiring today.

The revered American civil rights leader had numerous connections to Germany and profoundly influenced the formerly divided country, both East and West. DW looks back at Martin Luther King 50 years on from his death. (03.04.2018)

That Martin Luther King Jr. bore the name of Martin Luther is the most obvious link between them. But the influence of the German reformer on the American civil rights leader was more profound than that. (31.10.2017)