Germany remembers Martin Luther King 50 years after his death | Germany| News and in-depth reporting from Berlin and beyond | DW | 03.04.2018

The revered American civil rights leader had numerous connections to Germany and profoundly influenced the formerly divided country, both East and West. DW looks back at Martin Luther King 50 years on from his death. 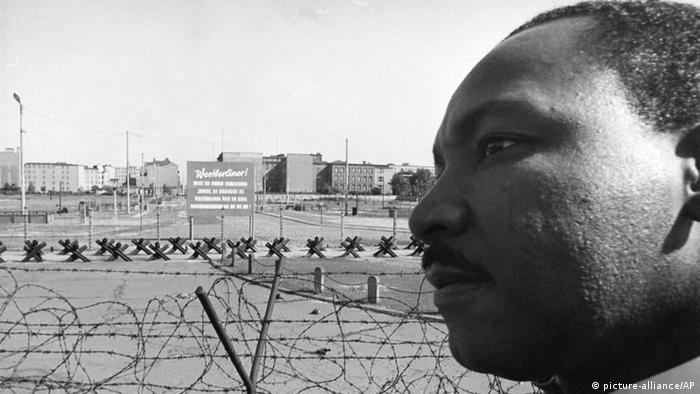 Martin Luther King Jr. touched the lives of billions of people around the globe, and Germany is no exception. Streets, schools and churches named after the civil rights activist and Nobel Peace Prize laureate abound here, as they do in many countries around the world. But King and Germany have a special connection.

The details of King's trip from September 12 to 14, 1964, to the divided city of Berlin are well known, including his use of a credit card to enter communist East Germany because US military authorities had taken away his passport. What's perhaps less familiar is the fact that King owes his very name in part to Germany.

King's father, also a Baptist minister, was born Michael King, but a 1934 trip to Nazi-ruled Berlin to celebrate the 100th anniversary of Baptism in Germany spurred King Sr. to change his name to Martin Luther in honor of the leader of the Reformation. Thirty years later, his son returned to the war-torn German city to deliver nearly identical sermons on both sides of the Berlin Wall.

"In Christ, there is no East nor West, no North nor South, but one great fellowship of love throughout the whole wide world," King told tens of thousands of listeners. "This is the faith I commend to you Christians here in Berlin: A living, active, massive faith that affirms the victory of Jesus Christ over the world, be it an Eastern world or a Western world."

King's message was one of overcoming divisions, and his appeal spanned the capitalist-communist divide. "For here on either side of the wall are God's children, and no man-made barrier can obliterate that fact," the minister said in his two sermons.

Nonetheless, East and West Germans both interpreted and appropriated the activist in accordance with their own needs. 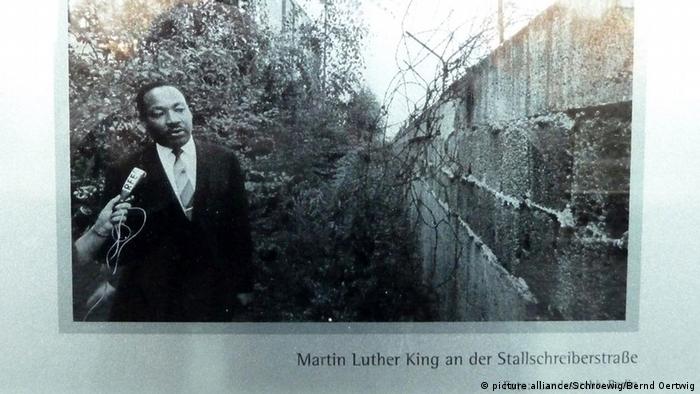 While in Berlin, King witnessed a seriously wounded East German escape across the Wall

For West Germans, King was an idealistic example of how to break with and resist the injustice and inhumanity inherited from the past.

"In the late 1960s, Germany was in flux, and people wanted new role models," Sieglinde Lemke, professor of North American Studies at the University of Freiburg, told Deutsche Welle. "People wanted to connect with the culture of hippies, protests and civil disobedience and not with the Nazi tradition of their fathers."

East Germans were far more prone to draw parallels between the oppression King experienced and their own situations. In 1953, for instance, Communist authorities had forcibly put down a popular protest among workers, and they didn't use kid gloves when dealing with disgruntled youths in the German Democratic Republic (GDR).

"King's civil rights movement, which we followed in the media, had parallels to the resistance in East Berlin," says Michael M. Schulz, who was present when King spoke in St. Mary's Church on September 13, 1964. "We saw how the American police unleashed their dogs on demonstrators. That's exactly the way the People's Police in the GDR treated opposition-minded young people."

It was no wonder then that the East German media, ever loyal to the state, made no mention of the fact that the world's most famous civil rights activist had spent a large part of that September day in their country. 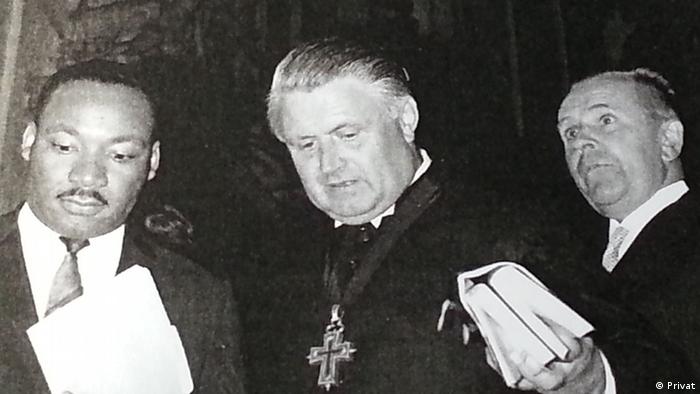 King was assassinated on April 4, 1968. Nevertheless, he continued to inspire people throughout the world, including in Germany. He was one of the pro-democracy figures that activists in the Eastern bloc rallied around, for example, at the Prague Spring student protests in Czechoslovakia later that year.

"We demonstrated with the Czechs on Wenceslas Square for democracy and (reformist Czechoslovakian leader Alexander Dubcek)," Schulz told DW. "Martin Luther King was the inspiration for that as well. Across all the borders. We sang 'We Shall Overcome' together," he added, referring to the gospel song that became an anthem of the civil rights movement and that King had quoted in his Nobel Peace Prize acceptance speech in 1964.

The peace laureate's influence would also be felt in the nonviolent protests of 1989 that brought down the Berlin Wall, the GDR and ultimately the rest of the Eastern bloc.

Some 300 kilometers (186 miles) south of Berlin, in a remote corner of Saxony, King follower and conscientious objector Georg Meusel describes himself as "one of the main actors in the peaceful revolution in the region."

In 1998 Meusel founded the Martin Luther King Center for Nonviolence and Civic Courage in the town of Werdau. He would also go on to play a small role in the world's historical understanding of King.

A voice from the past but as current as ever 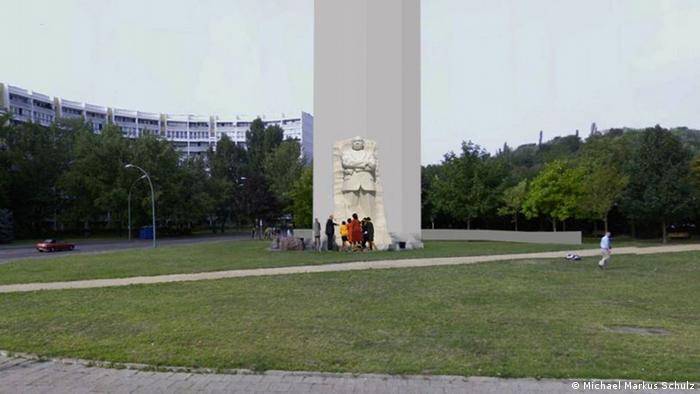 In 2003 Meusel went to St. Mary's Church in the eastern half of reunited Berlin, one of the two churches that King spoke at in 1964, where he then made an astonishing discovery. In the church vault were sound recordings of the sermon that had been made by the East German secret police. Meusel had them restored.

"All of a sudden that voice emerged from the white noise of the magnetic tape," Meusel told DW. "'My dear Christian friends in East Berlin' … Martin Luther King had been dead for 35 years, but for me this voice came alive."

King's ideas, Meusel adds, are "still at least as relevant as they were from the 1940s to the 60s," and that's not just a pious homily. The center Meusel runs back in Werdau is involved, among other things, with fighting right-wing extremism. It sits in an electoral district that gave the anti-immigrant, far-right Alternative for Germany (AfD) party 26.2 percent of its votes in Germany's national election last September.

Meanwhile in Berlin, Michael M. Schulz is leading an initiative to erect a Martin Luther King memorial on a square in the former east part of the city where an oversized statue of Lenin had once stood. "From a dictator to a man of peace" is how he characterizes his efforts.

It may be cultural appropriation but fifty years on from his assassination, Germans and people around the world continue see parallels between King's thoughts and their own situations and problems. Perhaps more so than ever in an age of hate speech, fake news and far-right populism.

"King is an icon and a symbol of social justice," professor Lemke says. "I think we find ourselves today in other phase of disruption, and that people's dissatisfaction with Trump and his ilk in Europe and Russia may have something to do with why King is being held up again as a model."